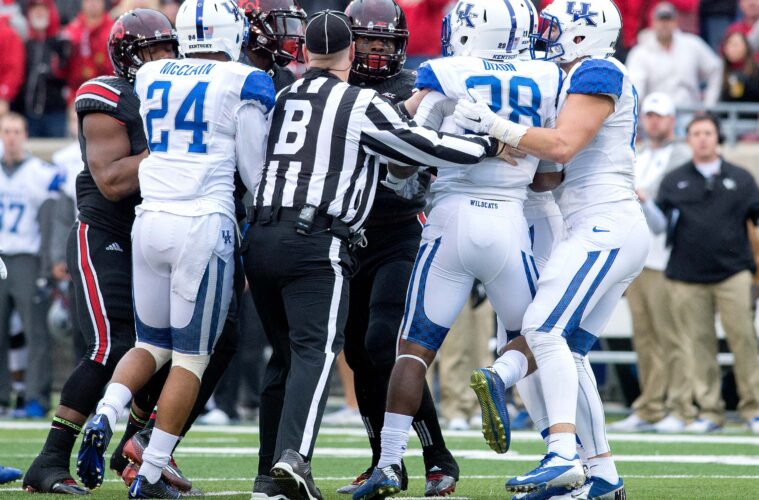 We all know that Twitter is a rage factory.  But when Kentucky loses a recruit, the rage gets pointed at high school kids.  In this case, 5-star Running Back recruit Damien Harris, a Kentucky native.  Harris has been the subject of a long recruitment by Mark Stoops and staff and the media surrounding UK have done their part to help fuel the interest……..but today, Harris choose Alabama over the Cats and the Ohio State Buckeyes.

What happens next, we’ve seen before.  It should be noted that many UK fans wished Damien well in a polite way, but let’s just say that not everyone reacted that way.

@DHx34 I hope he breaks his knee caps freak

Fuck You @DHx34 Turn your back on your home state…

@DHx34 you suck, always will. You have no future at Bama, and I hope you lose every game. #BBN #Badchoice

@DHx34 I hope you break your fucking leg and its career ending, you’re no representation of Kentucky IMO anymore #BBN

@DHx34 Good-luck sitting on the bench.

@DHx34 you could of been our savior… How could you

Evidently @DHx34 didn’t have what it takes to be a hero like @FballIsLife69. That said, best of luck to him in his future.

Bad decision @DHx34 you may see the field in 3 yrs would’ve been a starter at UK!! #BBN

@DHx34 At Kentucky, a legend. At Bama, just another payer. smh

@DHx34 # you will regret not picking #BBN

@DHx34 @Rivals Roll your butt right on out of KY lol

@DHx34 @RaulDuke26 . WAY TO CHOOSE THE EASY ROAD KID. GO From program changer to just another player in a program.

@DHx34 Just remember you were a backup plan for Saban

I thought @DHx34 liked playing time!! Might see ya get more than 5 snaps 3 years from now… smh BIG loss to the BBN, sucks

@DHx34 roll to the end of their bench

@DHx34 Probably just a blip on their recruiting radar. Have fun being just another guy on campus.

@DHx34 No one wanted you anyway! #rollovertide

@DHx34 they aren’t even gonna know who you are in Alabama. You’re just another football player to them lol

@DHx34 just another face in the crowd down there… Just get in line and play knowing if you mess up once your sittin..good luck though #BBN