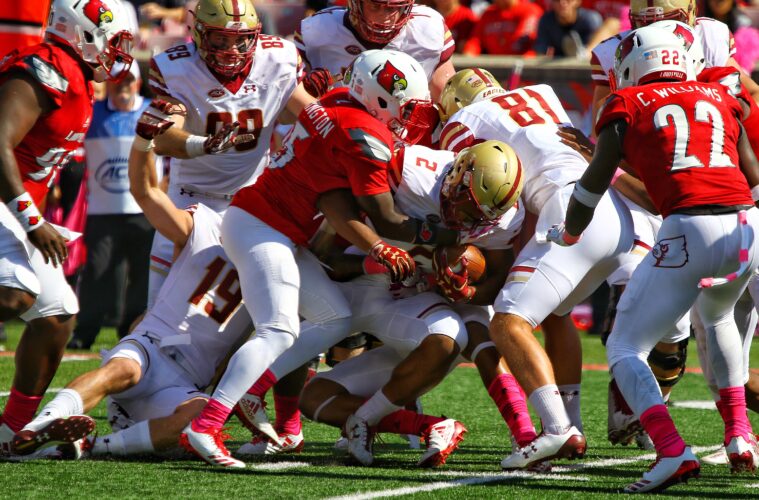 BOBBY PETRINO: We’re looking forward to our trip to Boston College to play a football team that’s playing really well. Obviously our challenge is to be able to defend their running game and play action game that they do real well, and then get our offense going and being more consistent on offense with our running game and passing game.

Q. Obviously there’s more to coaching than just the Xs and Os part. When you have a team coming off some deflating losses, what do you say to them to pick them up off the floor and get them optimistic and motivated going into this game?
BOBBY PETRINO: Yeah, the challenge is to stay together as a team and be positive and continue to work to get better in practice, and our players have done that. We’ve got some good leadership on the team. We’ve had good attitudes. They’ve went out on the practice field. Offensively we continue to show improvement over the last two games and doing a lot of good things.

Defensively it was disappointing, obviously a different style of offense that we didn’t play the way we had been playing.

Q. I was wondering what you’ve seen from the defense in practice this week. I know you talked a lot last week about the challenge of preparing for the option offense. Now that it’s over, do you throw it out and move on, or is there still an effect from that game on your team this week?
BOBBY PETRINO: Well, I feel like that they’ve come back and prepared real well. They’ve been practicing hard. We’ve been working hard on being physical and understanding that we’re going in to play a physical running team that does a good job of blocking fronts and has big running backs that run hard.

The preparation is a lot about individual technique and fundamentals and tackling, and then putting together as a team and running full speed to the ball and recognizing the difference between run and pass. They do a great job with their play action game, too.

Q. Especially given the popularity of RPOs in college football these days, I’m curious about your thoughts on the ineligible receiver downfield rule, whether it should be changed to one yard.
BOBBY PETRINO: Yeah, I wish they would change it to that. I feel like it really puts the defense in a bind. You’re trying to read run and you’re reacting to run, and then all of a sudden they’re throwing the ball. You know, it’s really hard to call for the officials because he has to see the linemen, then see when the ball was released, and a lot of times it’s really hard to make that call, whether he was really downfield or wasn’t downfield or what determines it.

You know, I would be in the school of let’s go to one yard.

Q. I was curious how does Boston College on offense look right now compared to when you guys played them last year just in terms of the way maybe they’ve evolved or gotten better at some of the things that they do?
BOBBY PETRINO: Well, they played really well against us last year. It was kind of their breakout game. You know, the challenge with them is they have a really strong, physical running game, multiple tight end sets that they utilize, and they do it with a fast tempo. You know, to have that type of running game and that type of personnel groups on the field and go fast, I think that’s the biggest challenge for us because you have to get lined up, you have to recognize it, and then have the ability to play fast and physical.

That’s what we’ve really been focused on and concentrating on.

Q. How hard is it to have to switch gears in terms of practice for the defense from two very different offenses in back-to-back weeks?
BOBBY PETRINO: Yeah, I mean, to get back and play more against the Boston College formations and that is — at least there’s a lot of carryover from other things that we did earlier in the year. It’s easier to get back to that than to transition to that option.

Q. Talk about the running back from Boston College, AJ Dillon. I know he’s an explosive running back that was banged up last week. Do you expect him to run against you guys, and how are you going to stop him from having a big day?
BOBBY PETRINO: Yeah, he’s a very, very talented young man that’s a physical runner, big, good inside runner, sees the blocks, is patient in there. And then the challenge with him is he also has the breakaway speed and the ability to catch the ball out of the backfield. So it’s a big package. He carries a lot of different weapons to it. We just have to play team defense. We have to get a lot of bodies to the ball and be able to wrap up and tackle him as a team.