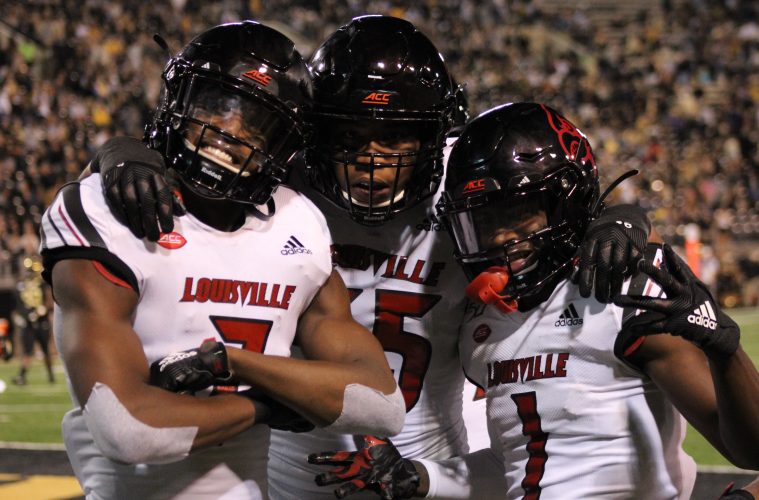 The University of Louisville landed four players on the 2019 All-ACC football team, as announced Tuesday by the Atlantic Coast Conference.

Atwell accomplished an outstanding sophomore season, leading the Cardinals with 61 receptions for 1,129 yards, which is the seventh-best total in school history, and tied a school record with 12 touchdowns.

A native of Miami, Fla., Atwell led the ACC in receiving yards and touchdowns, while posting six 100-yard receiving games.  He closed the season with a touchdown reception in five-straight games.

Becton, a 6-foot-8, 370-pound junior from Highland Springs, Virginia, has started 33 games at offensive tackle for the Cardinals and was named ACC “Offensive Lineman of the Week” on Oct. 7 after his performance in the 41-39 victory over Boston College. He graded out better than 80 percent in eight games and registered over 60 knockdown blocks to help the Cardinals finish the regular season at 7-5 and 5-3 in the ACC — a turnaround of five games from a year ago.

Hall, an Atlanta native, accounted for 1,276 all-purpose yards as a running back and one of the nation’s most explosive kick returners. The sophomore stands sixth in school history with 1,546 career kickoff return yards in only two seasons.

Averaging 106.3 all-purpose yards per game, Hall ranks fourth in the country and third in the ACC with a 31.7 return average and was one of only three kick returners in the league to return one for a touchdown. He returned a kickoff 100-yards on Oct. 12 in a 62-59 win over Wake Forest.

The sophomore recorded 728 kick return yards, which ranked fourth in the league and seventh nationally. As a running back, Hall was the team’s second-leading rusher with 497 yards and five touchdowns.

Hawkins, who only played four games in 2018, broke records in his first full season with the Cardinals.

Rushing for a UofL freshman record of 1,420 yards and eight touchdowns, Hawkins averaged 118.3 yards per game. His 1,420 yards rushing ranks fourth on the school’s single-season list and stands third in league history among freshmen.

He became the first 1,000-yard rusher since Lamar Jackson’s 2017 season, but was the first running back at UofL to accomplish the feat since Bilal Powell ran for 1,405 yards in 2010.

After 12 games, Hawkins ranks seventh in the country in rushing yards and first among freshmen nationally. The 5-foot-9 running back is second in the league in rushing yards, just 265 behind Boston College’s A.J. Dillon, who has rushed for 1,685 yards.

A native of Titusville, Fla., Hawkins registered seven 100-yards rushing games, including a career best 233 yards in a win over Syracuse on Nov. 23.  It was the most rushing yards by a Cardinal since Anthony Allen rushed for 275 against Middle Tennessee on Sept. 6, 2007 and the seventh-most in program history.