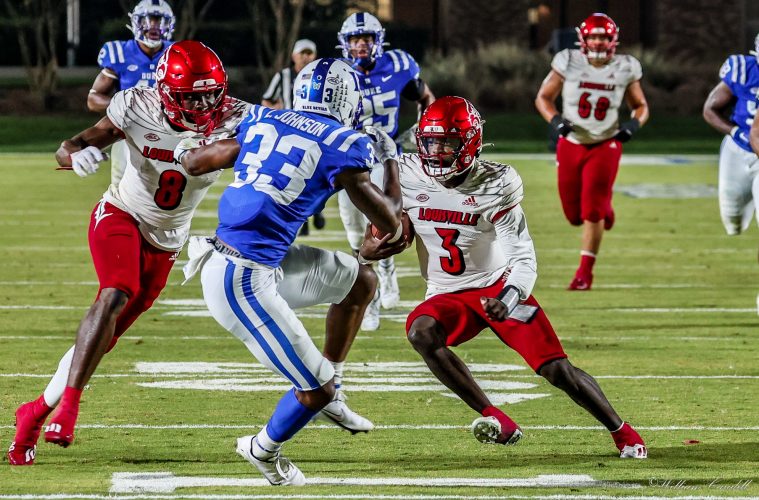 University of Louisville junior quarterback Malik Cunningham has been selected as the Manning Award Quarterback of the Week. He earns the honor over seven other Manning Award Stars of the Week in the Allstate Sugar Bowl’s Facebook contest.

Cunningham, a Montgomery, Ala., native, completed 18-of-25 passes for 303 yards and five touchdowns as the Cardinals clinched bowl eligibility with a 62-22 blowout of Duke in an ACC road game. He also ran for 224 yards (on just 11 carries) and a pair of touchdowns becoming the second FBS player with a 300/200 game – and he didn’t play the final 12 minutes of the game. His second-quarter rushing touchdowns went for 44 and 72 yards.

The redshirt junior was also tabbed the Atlantic Coast Conference Quarterback of the Week. His 527 total yards mark the fourth-highest single-game total by a Louisville player, and he is the second player in Louisville history to be responsible for seven touchdowns in a game (Lamar Jackson had three such games). Cunningham set the Louisville record for yards per carry by a player with at least 10 attempts, averaging 20.4 on just 11 carries.

Cunningham and the Cardinals will close out their regular season against in-state rival Kentucky on Saturday at 6:30 p.m. CT in Louisville. The game will be televised by ESPN2.

The closest competition for Cunningham came from East Carolina’s Holton Ahlers and Bailey Zappe of Western Kentucky. Ahlers, who also ran for 48 yards, completed 27-of-32 passes for 405 yards and three touchdowns. He tossed the game-tying touchdown pass with 5:01 to go and then connected on a 46-yard pass with under a minute to play to set up the game-winning field goal as the Pirates upended Navy, 38-35, in an AAC road game. Zappe, who had his fifth game with five or more touchdown passes this year despite sitting the bulk of the fourth quarter, completed 39-of-49 passes for 470 yards and six touchdowns as he led the Hilltoppers to a 52-17 victory over FAU in C-USA play.

The Manning Award selected 32 quarterbacks for its preseason Watch List and made 15 midseason additions in October. Ten finalists will be selected and the winner is scheduled to be announced following the College Football Playoff National Championship. Since the Manning Award started recognizing Stars of the Week in 2011, 464 different quarterbacks from 129 schools have been recognized. Sixty-three different quarterbacks have been honored so far during the 2021 season.

All the Manning Award winners follow in the footsteps of the Mannings themselves. In college, Archie, Peyton and Eli Manning combined for over 25,000 passing yards and 201 touchdowns while playing in 10 bowl games and earning four bowl MVP awards. Archie was the No. 2 pick in the NFL Draft, while both Peyton and Eli were selected No. 1 overall.