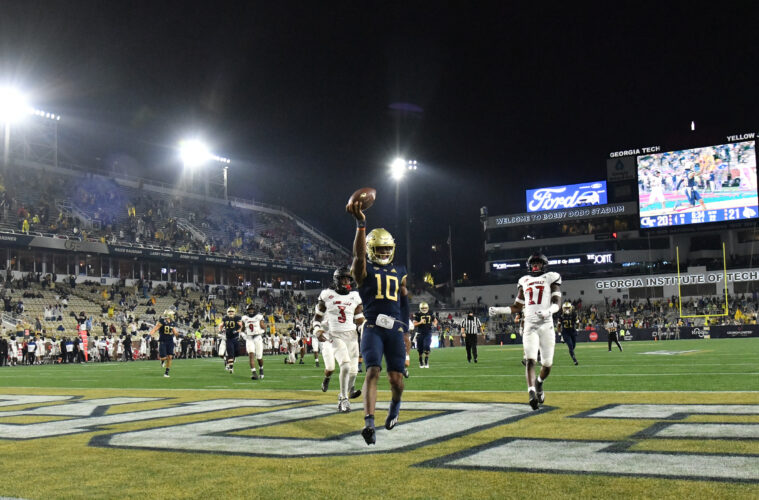 There is only one way to begin describing the loss to Georgia Tech. Louisville could not hang on to the ball. The Cards lost 3 of its 4 fumbles and had reviews on two others (Javian Hawkins was down and Tutu Atwell reviewed Touchback). Louisville was thankfully down on those reviewed fumbles, but watching the game its clear that Louisville has ball control issues. Atlanta native Hassan Hall lost two fumbles and didn’t see the field after the 2nd.

The most frustrating part about losing this game to Georgia Tech is that it was the 1st time in 2020 that the Louisville Offensive Line controlled the line of scrimmage. Malik Cunningham had time to throw and Javian Hawkins had H O L E S to run through.

It was the small things that limited Louisville. Penalties, fumbles, a drop in the passing game (or a bad throw) but the Cards were GASHING the Ramblin’ Wreck.

The UofL OL took the Miami & Pitt games personally and the rest of the team let them down.

Right before halftime Louisville Football had held Georgia Tech to just 7 points. And those 7 points came after a fumble by Hassan Hall and a successful fake punt. Not entirely the defense’s fault up until this point….. but then it crumbled.

Isaiah Hayes has been jumped over twice with ball carriers going into the endzone. Miami’s Brevin Jordan and now Georgia Tech’s Jahmyr Gibbs. Both times making a tackle with his head down.

The overall arm tackling, pursuit angles and attention to detail was lacking.

Louisville gave up 20 points and 175 yards in the 4th quarter.

Leading 21-7 Louisville had overcome a pretty terrible start to the game and had controlled the game well enough to be up two touchdowns. But little went right after that. As previously mentioned, the fumbles the defense and just…… can anybody think of something that went well after 21-7?

Louisville -3 On Turnovers vs. Worst Turnover Margin Team in the Country

I just wanted to reiterate here that Louisville fumbled the ball 3 times and didn’t force a turnover defensively against the worst turnover margin team in College Football.

In 2020 Louisville Football hasn’t played with the same winning attention to detail or discipline that allowed the Cards to win 8 games and excite the fanbase about the rebuilding job that Scott Satterfield and staff have undertaken.

But that’s all out the window now. Louisville is 1-3 with 3 consecutive losses.

And there are plays to be made out there on the field. Guys are open, holes are there to run through. Blitzes are close, tackles are within reach……. Louisville just isn’t executing.

It’s reasonable for Louisville coaches to say, “We’ll get it fixed. It’s teachable. It’s correctable.” But the reality is that Louisville Football has run out of margin for error….. the program is running out of runway for its 2020 season. Notre Dame, Florida State, Virginia Tech and Virginia all loom on the immediate horizon for this team.

Georgia Tech won 3 games in 2019. It was the 1st time in the Geoff Collins era that the Yellowjackets scored over 30 points…. they scored 46.

2019 gave Louisville fans hope that its football program would stop making the wrong kind of history.