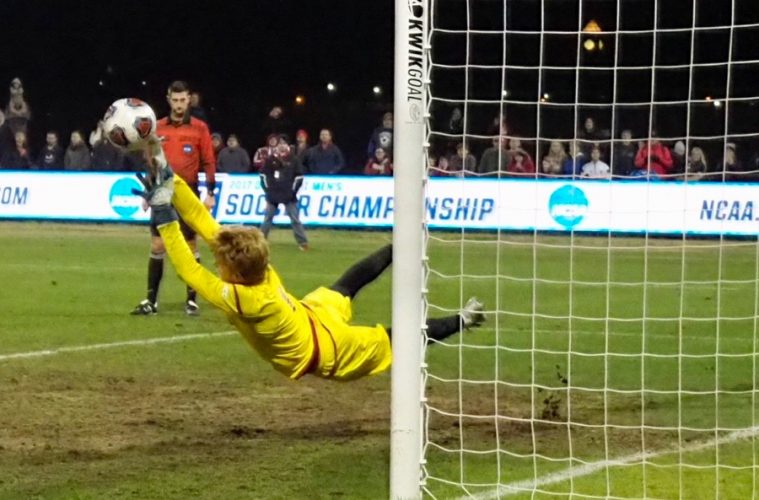 The No. 4 Louisville men’s soccer team suffered a heartbreaking end to its season Friday night as No. 5 Akron registered a 4-3 shootout victory in the NCAA Championship quarterfinal match at Dr. Mark and Cindy Lynn Stadium. The two sides played to a scoreless draw in regulation and overtime before the Zips clinched the College Cup berth in the sixth round of the shootout.

With Friday’s result, Akron (18-3-2) advances to the College Cup for the fifth time in school history and will face either No. 1 Wake Forest or No. 9 Stanford in a national semifinal Friday night at Talen Energy Stadium in Philadelphia, Pennsylvania. The Cardinals (13-2-5) end their season in the quarterfinal round of the NCAA Championship for the second straight year.

“It’s a tough way to bow out of the NCAA Tournament, without having lost. It’s a tough way to decide it but it is the way it is. I’m sad for our guys, especially the seniors,” said Cardinals head coach Ken Lolla. “I told (the team) that I don’t have words for an ending like that. I can’t console them because there are no words I can offer. It hurts and it should hurt. When you put that much into the season and it ends so suddenly, it’s difficult and it’s a lot to process. Only time will allow us to deal with it.”

After the teams remained even on the scoreboard through 110 minutes, they continued that trend in the shootout with each side successfully connecting on three of five attempts before the Zips emerged victorious in the sixth round. The Cardinals missed on their attempt in the first sudden victory round of the shootout before Akron’s Niko De Vera delivered the clincher in the upper left corner. In the first five rounds, the Zips were successful on the first (Stuart Holthusen), fourth (Sam Gainford) and fifth attempts (Joao Moutinho), while the Cardinals connected on the second (Adam Wilson), third (Tim Kubel) and fifth attempts (Tate Schmitt).

The match reached the shootout round after the two teams played relatively even through regulation and 20 minutes of overtime. The visiting Zips finished with a 15-11 advantage in shots, including a narrow 3-2 edge in attempts on-goal. Redshirt freshman goalkeeper Will Meyer turned away all three shots he face to register his seventh shutout and the 12th total shutout of the season for the Cardinals.

“For Akron, they want to have the ball and we were okay with them having more possession. What we wanted were the better chances and I thought in the first half, we did that,” Lolla said. “In the second half, I thought we had moments of it but not enough sustained. We defended a little bit too much but even still, in the overtime, I thought we had a couple of good opportunities and could have put it away.”

Senior defender Tim Kubel capped his collegiate career with 21 goals and a school record 26 assists in 82 matches during his four seasons. Junior midfielder Tate Schmitt closed the season as the Cardinals’ goal-scoring leader with nine, including four game-winners. Senior forward Mohamed Thiaw scored eight goals and finished his two-year career at Louisville with 20 goals, including 10 game-winners.