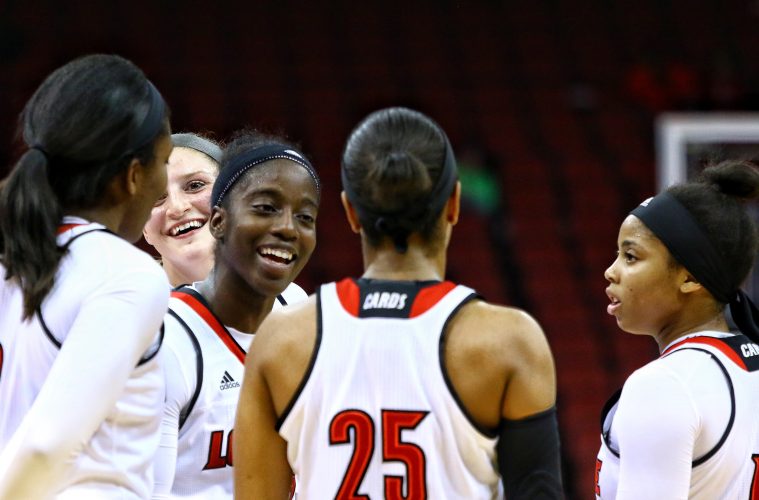 The series record is now 20-34 and head coach Jeff Walz’s record is 6-6 against Kentucky.

Louisville outscored UK 42-28 in the paint and has outscored their opponent down low in nine of 10 games this season. The only game where they were outscored in the paint was against Hartford (28-38). They had a season-high 54 points in the paint against UT Martin and are averaging 39.6 per game.

Five players scored in double figures in the win over Kentucky (Asia Durr – 32, Sam Fuehring – 12, Jazmine Jones – 12, Bionca Dunham – 11, Dana Evans – 10). Seven active players are averaging more than 7.4 points per game and 17.7 minutes per game. Overall, at least 11 players have played in seven of 10 games, and at least nine have scored in six games.

Durr was named ACC Player of the Week for the second-consecutive week after averaging 28.5 points per game in wins over UT Martin and Kentucky. She shot 49 percent from the floor, while averaging 3.0 assists, 3.5 rebounds and 2.0 steals.

Against UT Martin, she posted 25 points on 8-of-18 shooting, including 3-of-6 from beyond the arc and 6-of-6 from the foul line, while adding five rebounds, three assists and three steals. She followed that with 32 points on 13-of-25 shooting against Kentucky, opening the game with Louisville’s first seven points in route to a 15-point first quarter.

She has been named ACC Player of the Week nine times in her career, which is the active ACC record. She has earned the accolade three times this season, previously being honored on Nov. 12 and Dec. 3. She was named ACC Player of the Week on Dec. 3 after averaging 20.0 points, 4.7 assists and 4.0 rebounds, while shooting 51 percent from the floor, in home wins over Miami (Ohio), Nebraska and Tennessee State. She also earned the honor at the end of the first week of the season after averaging 28.5 points per game in wins at Western Kentucky and Chattanooga.

Louisville moved up to No. 3 in the USA Today/Coaches Poll. It marks their highest ranking since they held the No. 3 spot the weeks of March 5 and 12 last season. Last year, they tied a program-high by reaching No. 2 on Jan. 15 after beating Notre Dame, 100-67. It marks the earliest they have reached No. 3 since the 2013-14 season when they reached No. 3 on Nov. 18.

Walz graduated from Northern Kentucky in 1995 and lettered two seasons for their basketball team. It marks the first time that he will face his alma mater.

Last year, Northern Kentucky went 9-22 overall and 6-12 in Horizon play. The Norse have opened this season with a 1-5 record, their lone win a 73-32 victory over Alderson Broaddus (DII, Phlippi, W. Va.). In their last two games, they have lost by a combined nine points to Austin Peay (L, 52-48) and Illinois State (L, 58-53). They feature seven players averaging more than 5.5 points per game, led by freshman guard Taylor Clos, who is averaging 10.3 points per game.

Series History – UofL is 9-10 all-time against Northern Kentucky and 5-2 at home. This marks the first matchup between the two teams since Nov. 25, 1989 when the Cardinals fell 71-60 at NKU.