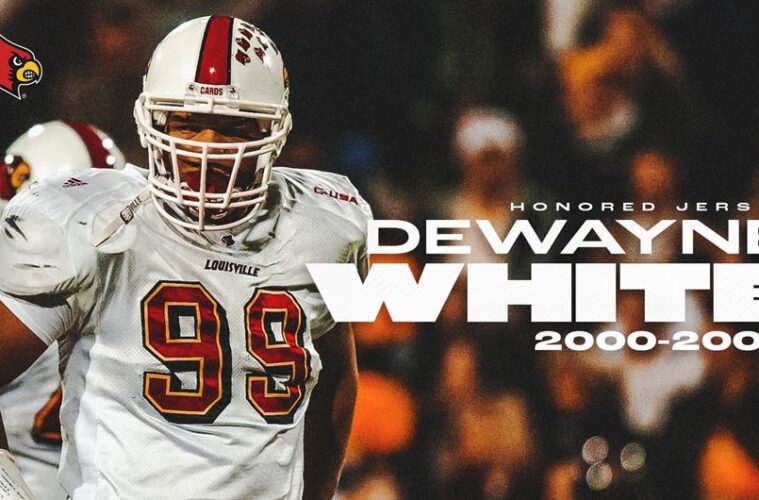 Louisville Football to Honor Dewayne White’s No. 99 Jersey Versus Clemson

Former University of Louisville defensive end Dewayne White, the 2001 Conference USA Defensive Player of the Year, will have his No. 99 jersey honored during a ceremony at the Clemson game on Saturday afternoon at Cardinal Stadium.

It will be the 25th jersey to be celebrated in program history.

The Marbury, Ala., native played for the Cardinals from 2000-02, led the team in sacks and tackles for loss for two straight seasons and was one of the most decorated linemen in school history.

One of the most dominant pass rushers in school history, White, a two-time first team all-C-USA performer, finished his UofL career with 37.5 sacks and 56.5 tackles for loss, both of which still stand as school records. He also holds the school’s single season record for tackles for loss with 23 during the 2001 season.

The 2002 season, his final one at Louisville, saw him record 16.5 tackles for loss and 10.0 sacks in guiding the Cardinals to an appearance in the GMAC Bowl. Off the field, White was named the recipient of the 2002 Disney’s Wide World of Sports Spirit Award, which recognizes the accomplishments of college football’s most inspirational student-athlete.

The 2001 Conference USA Defensive Player of the Year, White earned that distinctive honor after ranking No. 2 nationally and leading C-USA with a then league record 15 sacks and tied for the league lead with a record 23 tackles for loss. In leading the league with 86 tackles among defensive linemen, White was a first team All-C-USA selection and earned second team and third team All-American honors.

As a freshman in 2000, White earned third team Freshman All-American accolades and Conference USA All-Freshman honors. He totaled 52 tackles, including 17 tackles for loss in leading the Cardinals to the Liberty Bowl. That season, White led the team with 22 quarterback hurries and batted down five passes and was honored as the Defensive Most Valuable Player after recording three tackles for loss, a pair of sacks and a forced fumble.

After his collegiate playing career, White was selected with the 64th pick in the 2003 NFL Draft by the Tampa Bay Buccaneers and went on to play seven years in the NFL, recording 201 tackles and 27 sacks.

White put together three strong seasons (2006-08) in the NFL, recording 18 sacks and 22 tackles for loss during his time with Tampa Bay and Detroit. He recorded a career high 6.5 sacks during the 2006 and 2007 seasons with the Lions.