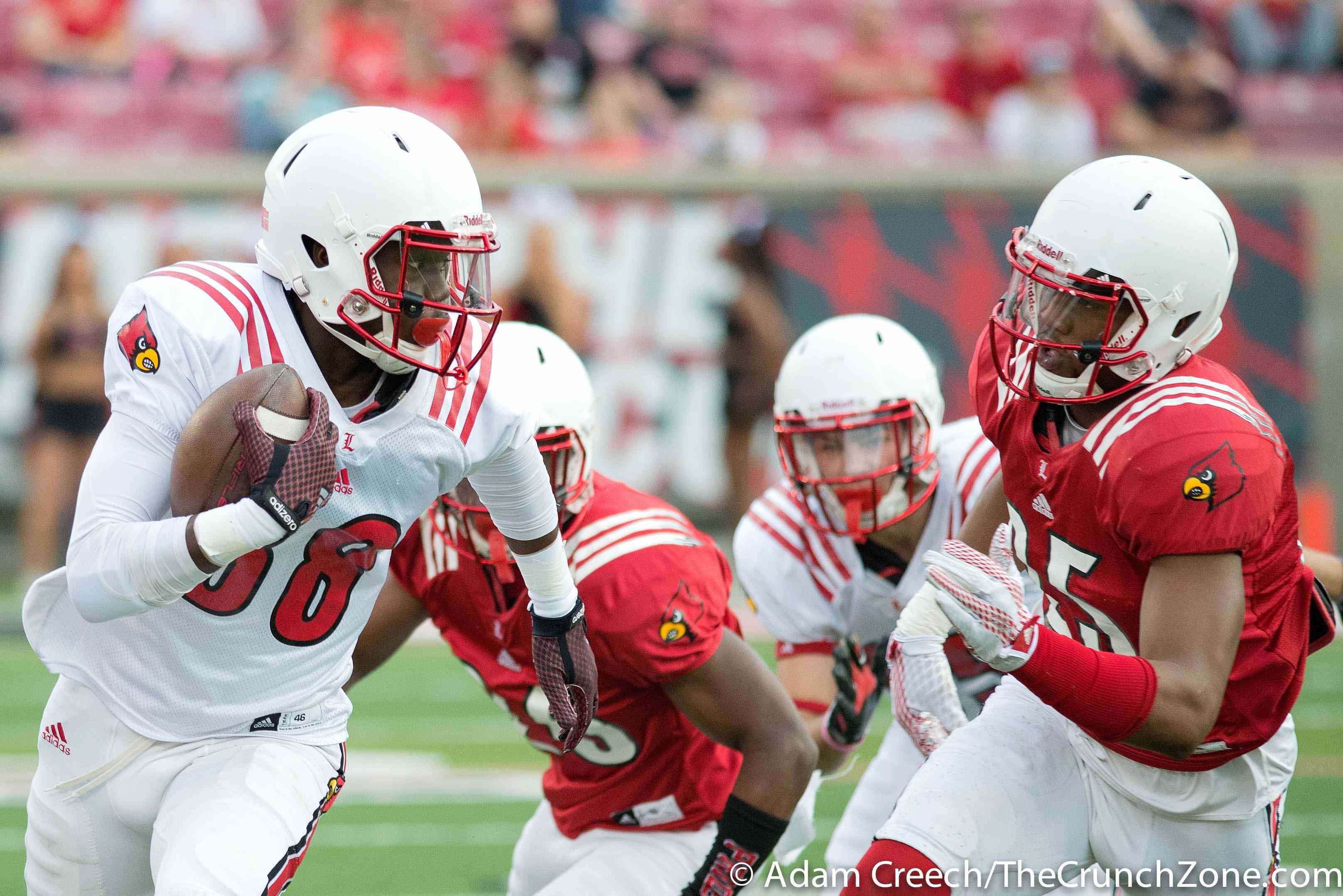 With less than a week before Saturday’s Spring Game, the University of Louisville football team conducted its final major scrimmage on Saturday morning in the Trager Indoor Practice Facility.

The Wendy’s Wonderful Spring Game is slated for Saturday at 1 p.m. in Papa John’s Cardinal Stadium.

Due to cold and windy conditions in the Louisville area, the Cardinals had a 161-play scrimmage inside the Trager Center, with the first units facing off against the second groups on each side of the football. During the scrimmage, the Cards scored touchdowns on 13 different possessions, with a number of Cardinals making big plays, especially in the passing game.

“We went a long time this morning,” head coach Bobby Petrino said after Saturday’s 12th practice. “It was a good scrimmage. It was back-and-forth again. We look forward to the spring game next Saturday. The whole week will be a lot of fun with two practices and the game on Saturday.

Petrino singled out a number of Cardinals for their play in the scrimmage, especially quarterback Lamar Jackson, who completed over 75 percent of his passes on the day. Kyle Bolin was also very effective making plays down the field, especially when he connected with Ja’Quay Savage for the longest scoring play of the day.

“I thought Lamar (Jackson) threw the ball well,” Petrino said. “We had some big plays down the field between James Quick and Jamari Staples. I was really pleased with Ja’Quay Savage’s week. This week was probably the fastest Ja’Quay’s played since he has been here. I thought Reggie Bonnafon made some plays down the field. We took this week and focused on him at wide receiver, and I think it showed. We got good production out of our tight ends. It was fun day.”

Tight end Cole Hikutini enjoyed the long scrimmage and also recognized the improvement in Jackson’s ability to throw the football this spring. The junior pass catcher was one of the team’s leading receiver in the scrimmage on Saturday.

“It was fun out there,” Hikutini said. “We all love coming out to scrimmage. It was good to see if we can make plays during a full-go scrimmage. I also think Lamar is getting better each day.  I think with him knowing the offense better, he is throwing the ball better and making all of his reads. He has really improved a lot this spring.”

The Cardinals will practice on Tuesday and Wednesday before taking the field for the Wendy’s Wonderful Spring Game at 1 p.m.Gates will open at noon for the free event.