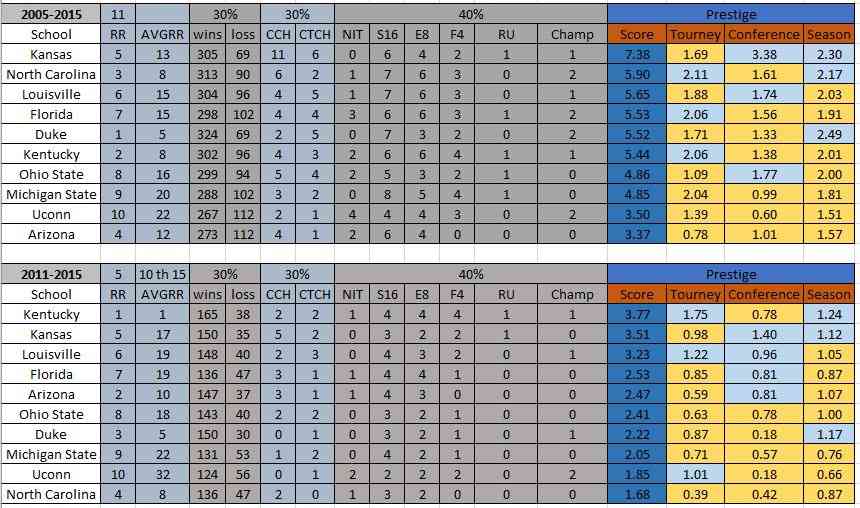 Thanks to Rick Pitino, Louisville is one of the most consistent programs out there.  How did we get here?  Let’s take a look.

REWIND:  Louisville was floundering into irrelevance as the recruiting game passed Denny by. Louisville turned to Rick Pitino for a shot in the arm. He too learned the recruiting game was much different from when he left. In fact, Rick was almost one and done U when he got started. The only problem? Kids COULD go pro out of high school. Telfair, Amir Johnson, Donta Smith, and others committed only to disappear without a minute played. Hell, we lost the first kid ever to Europe (Jeremy Tyler), so Louisville lost a few top recruits. Strategy changed – go for the kids in the 25-50 range it seemed. Build the base, land a few 5 star kids when you can.

Here are some numbers to show how Louisville compares to top programs once Louisville “returned” to glory with Louisville’s first final four since 1986. Some things to explain first…

Most of the columns are self-explanatory, but here are a few that might not be;

PRESTIGE SCORING:  Each of the three buckets yield a prestige score.  Check the far right. Those added together make a total score (blue column). Those light blue highlights in prestige point out the TOP THREE performers in each bucket.  In one, there were 2 tied for 3rd, so I highlighted both for third place.

I then sort each time period by total score to rank programs in 2 time frames.

Satisfaction Guarantee:  If I made a slight mistake, I will return your blog subscription fees.