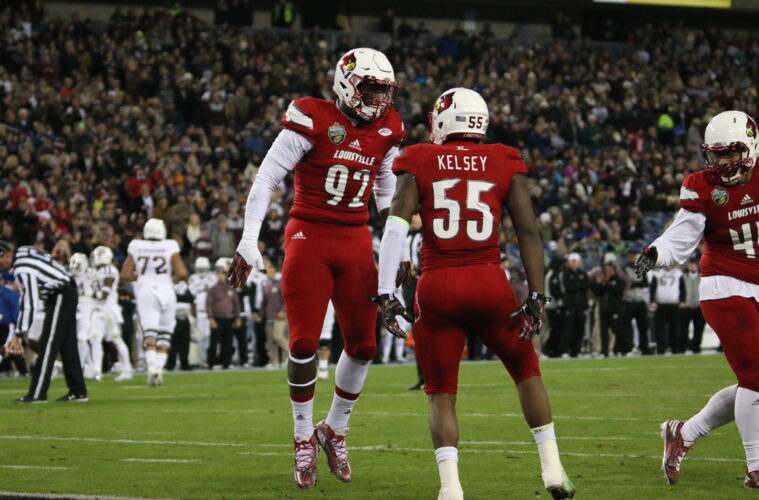 Two Louisville Defenders were named to the Bronko Nagurski Award Watch List on Friday morning.  The Bronko Nagurski Award was awarded to Louisville Defensive End Elvis Dumervil in 2005 and is the only Cardinal to win the award thus far.  The Nagurski Award is awarded annually since 1993 to the best defensive player in college football by the Charlotte Touchdown Club and the Football Writer’s Association. Previous winners include Warren Sapp, Charles Woodson, Champ Bailey, Terrell Suggs, Ndamukong Suh, Luke Kuechley & Aaron Donald.

Devonte Fields finished 2015 with 63 tackles with TWENTY-TWO (22!) TFLs and 10.5 sacks and forced 2 fumbles.  Much of his performance came during the second half of the 2015 season.

Josh Harvey-Clemons was Louisville’s 3rd leading tackler in 2015 with 88 at the safety position.  JHC also pulled down 3 interceptions (2 in one game, Auburn) and forced a fumble.

A pair of University of Louisville football players were honored by the Football Writers Association of America on Friday with the announcement of the 2016 Bronko Nagurski Trophy Watch List.

Harvey-Clemons, a starter in all 13 games, established himself as one of the nation’s top safeties following his junior season where he totaled a career-high 88 tackles and was second on the team with three interceptions. He ranked 18th in the ACC in tackles with an average of 6.8 tackles per game and was tied for eighth in the conference in interceptions. The rising senior opened the 2015 campaign with a pair of interceptions and a career-best 14 tackles in the 31-24 loss to Auburn in the Chick-fil-A Classic in Atlanta. Ga.

A native of Fort Worth, Texas, Fields, who transferred from Trinity Valley Junior College, led the nation in tackles for loss per game at 1.73 and paced the Cardinals with 11.0 sacks – the highest total by a Cardinal since Marcus Smith recorded 14.5 in 2013. An all-ACC honorable mention selection last season, Fields was fourth in the league with 0.85 sacks per game and was third in tackles for loss with 22.5. He closed the year with 5.5 sacks in his final two contests, including 3.0 in the 27-21 win over Texas A&M in the Music City Bowl.

Fields was  also named to the Chuck Bednarik Preseason Watch List on Tuesday. The Bednarik Award has been presented to the College Defensive Player of the Year since 1995.

The FWAA and the Charlotte Touchdown Club will announce five finalists for the 2015 Bronko Nagurski Trophy on Nov. 19. The annual Bronko Nagurski Trophy Banquet, presented by ACN, will be held on Dec. 7 at the Westin Hotel in Charlotte. The FWAA has named a National Defensive Player of the Year since 1993. In 1995, the FWAA named the award in honor of the legendary two-way player from the University of Minnesota. Nagurski dominated college football then became a star for professional football’s Chicago Bears in the 1930s. Bronislaw “Bronko” Nagurski is a charter member of both the College Football and Pro Football Halls of Fame.