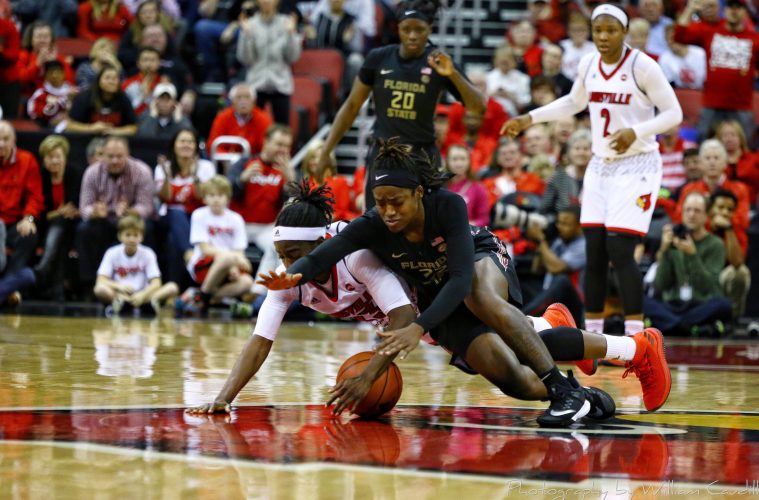 Florida State guard A.J. Alix relied on a short memory and made a clutch long-range shot. The No. 12 Seminoles then made sure No. 2 Louisville didn’t answer with one of its own and earned a signature road victory.

Alix made a go-ahead 3-pointer with 1:04 remaining and Nicole Ekhomu added a free throw with 7.8 seconds left, helping FSU hand Louisville its first loss of the season, 50-49 on Sunday.

”If I miss three shots, I know that I can shoot the next one and convince myself that I can make it,” said Alix, who was 1 of 6 overall with two misses from beyond the arc before making her final attempt. ”They left me open, so I just took it and hit it. It felt good.”

The Seminoles (18-2, 6-1 Atlantic Coast Conference) trailed 22-9 after the first quarter before rallying, taking their first lead at 37-36 in the third quarter. They shot just 28 percent overall.

Louisville threw the ball away seconds before that, the last of several turnovers made down the stretch. Myisha Hines-Allen put back Asia Durr‘s missed 3 for a layup as time ran out, but the Seminoles were already beginning to celebrate a road win over their highest-ranked opponent in program history, topping a 71-69 win at No. 4 Duke on Feb. 8, 2001.

”If you had told me we’d score 50 points and won, I’d have thought you were crazy,” Florida State coach Sue Semrau said. ”We learned something about how hard we need to defend, and I’m proud of our rebounding. What, Louisville had 20 straight wins? They’re a great team, and we had a good night.”

The Seminoles came in averaging nearly 88 points per game.

Shakayla Thomas had 14 points and 11 rebounds and Imani Wright scored 10 points for Florida State. The Seminoles have won four in a row and eight of nine.

Florida State: The Seminoles couldn’t have started worse, missing 14 of their first 17 shots and 22 of 32 in the first half. Yet they trailed just 32-26 at the break and got within 32-29 early in the third quarter as shots began falling. They created chances through an effective zone that slowed the Cardinals and made Durr work hard for shots.

Louisville: Walz has said all along that his team wouldn’t go undefeated, and a Cardinals offense that relied on Durr’s shooting to get things going had to rely on others to fill the void as she struggled from the field. Carter’s 3 was the only big basket they got down the stretch as possessions ended either in missed shots or turnovers. The Cardinals turned it over 16 times.

Of her final attempt, Durr said, ”I think it was a great shot. There wasn’t that much time left on the clock. I had a great look, it just didn’t follow through.”

The Cardinals could drop a few spots but remain in The AP top five with their first loss. Florida State could break into the top 10 after its signature win.