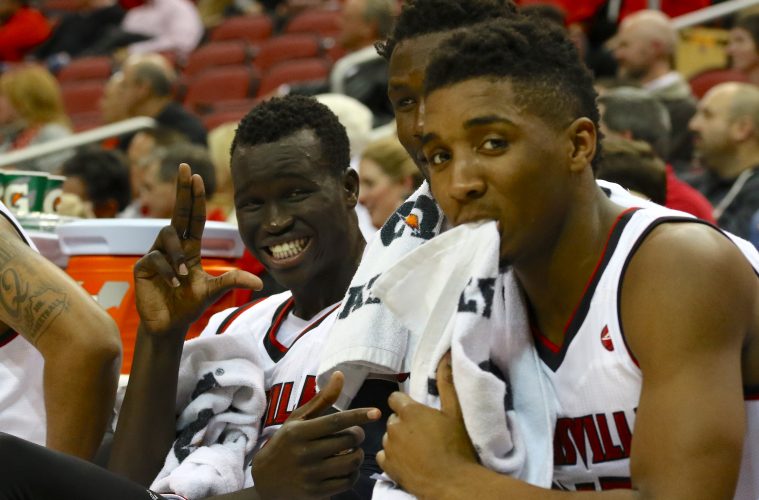 University of Louisville guard Donovan Mitchell is among the Top 30 players in consideration for the 2017 James. A. Naismith Trophy, presented to the nation’s most outstanding men’s college basketball player, in the list announced today.

Presented by the Atlanta Tipoff Club, Mitchell is among a nation-best seven ACC players on the list.  The 10 semifinalists for the national award will be announced March 1.

The Cardinals’ top scorer (15.0 ppg) in a balanced lineup, Mitchell is currently eighth in Ken Pomeroy’s national player of the year ratings.  He leads the ACC and ranks 16th in the nation in steals with 53 thefts this season (2.2 per game).

A 6-3 sophomore from Greenwich, Conn., Mitchell scored a career-high 29 points at Pittsburgh on Jan. 24 and enters Saturday’s 2 p.m. game against Miami needing 11 points for 600 in his career.  He was named the ACC and NCAA.com Player of the Week for games Jan. 23-29 when he averaged 28.5 points, five rebounds, four assists and shot 60 percent from the field, including 67 percent from the three-point line (12-of-18).

In his last 11 games, Mitchell has averaged 19.2 points 4.3 rebounds, 3.3 assists, and 2.3 steals and made 32-of-74 three-pointers (.432).  Mitchell grabbed four steals in each of the last two games at Boston College and Virginia, the sixth time he had as many in a game this season.

The complete list of the Top 30 candidates is included below.