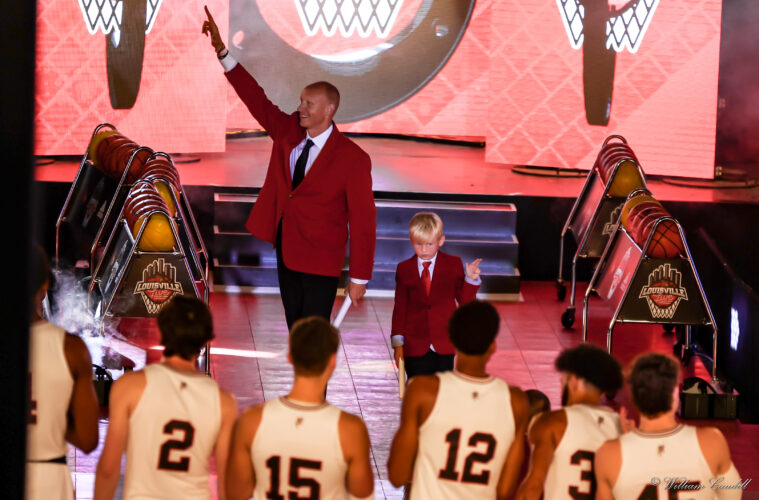 D’Ante “Tae” Davis, 6-6, 175-pound guard from Warren Central High School in Indianapolis, Ind.; and Fredrick King, a 6-10, 220-pound center from Mangrove Cay, Andros, in the Bahamas; have each signed a national letter-of-intent to continue their basketball playing careers at the University of Louisville.

Davis averaged 13.5 points and 6.2 rebounds per game as a junior last season in helping Warren Central post a 19-7 record before falling to 4A state finalist Lawrence North by a point in the sectional semifinals.

“We are excited to announce the signing of D’Ante Davis,” said UofL Head Men’s Basketball Coach Chris Mack.  “D’Ante has been a Cardinal in his heart for over a year and today it is official. He will add size and length on the wing in our interchangeable system. His ability to guard multiple positions on the floor as well as present mismatches offensively is a big plus for our program. He comes from an incredibly supportive family and we look forward to the practice battles with his older brother D’Andre every day next season.”

The younger brother of current UofL sophomore guard/forward Dre Davis, Tae is ranked among the nation’s top 150 players, including No. 139 by Rivals.com and No. 147 by 247Sports.com.  He was an AP high honorable mention all-state selection as a junior in 2020-21, an All-Metropolitan Interscholastic Conference honoree and was named to the Indiana Basketball Coaches Association Underclass All-State Supreme 15.  He was named to the 2021 Indiana Junior All-Star team, but was unable to participate in the June game.

Davis had transferred to Warren Central for the 2020-21 season after his father, D’Andre Davis Sr., became the school’s head coach after previously serving six seasons as an assistant coach at Lawrence Central.  As a sophomore at Lawrence Central, Tae averaged 10.9 points and 4.7 rebounds per game in 2019-20.

Tae will join his brother Dre on the Cardinals’ roster next season as the first brother combination on the same UofL team since Charles and Kent Jones played for the Cardinals from 1981-84. Brothers Scooter and Rodney McCray were also together on the 1979-83 UofL roster, helping the Cardinals to three Final Fours and the 1980 NCAA Championship.

Davis committed to the Cardinals in early December 2020 and chose Louisville after also considering Indiana, Purdue, Nebraska and Xavier.

Many collegiate programs became aware of King when he joined the NBA Academy, where he averaged 23 points and 12 rebounds to lead his NBA Academy Latin America team to a 3-0 record at the NBA Academy Games in San Luis Potosi, Mexico in September.

“Fredrick is a home run signing for us,” said Mack.  “Although a virtual unknown, he won’t be for long. Originally from the Bahamas, Fredrick has only been playing organized basketball since the age of 14. Since that time, his rise has been rapid. He is a modern big in that he can run, dunk, shoot, pass and play on the perimeter as well as around the hoop. We believe Fredrick isn’t finished growing and will become one of the best big men in the ACC somewhere during his time at Louisville. We are excited that he’s a Cardinal.”

In his top two games in the NBA Academy International event, King scored 31 points and grabbed 16 rebounds in an 82-61 win over NBA Africa Red, and totaled 29 points and 13 rebounds in a 93-87 victory over The Skills Factory.  King, who turns 18-years-old in February, was the first Bahamian to enroll at the NBA Academy.

Before his move to the NBA Academy in January, King played in junior high school for DW Davis and in high school for CI Gibson in the Government Secondary Schools Sports Association (GSSSA) in the Bahamas, where he was a part of successful teams.  His C.I. Gibson team was the GSSSA runner-up to champion Doris Martin last season.

King, who has a 9-2 standing reach, signed with the Cardinals after narrowing his collegiate choices to Miami, Georgetown, Creighton and Washington State.