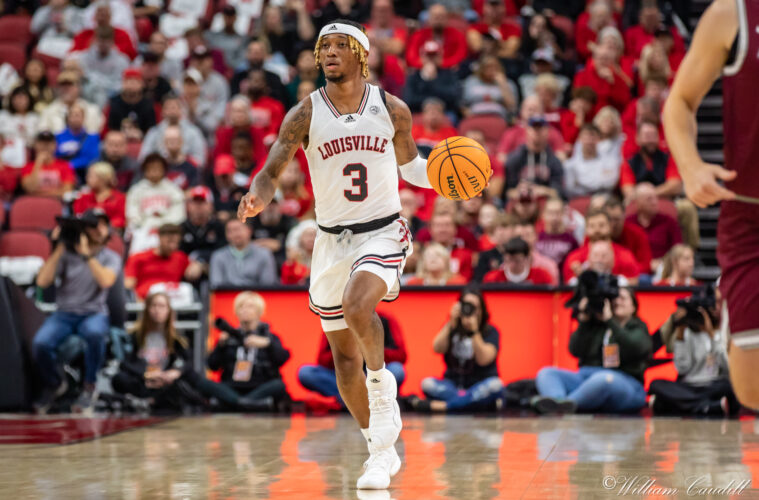 Despite a furious rally in the final minutes, the University of Louisville men’s basketball team fell to Bellarmine 67-66 on Wednesday in its season opener at the KFC Yum! Center.

The Cardinals (0-1) held Bellarmine scoreless for the final 4:41 of the game and finished on an 11-0 run, but were unable to ever reclaim the advantage.

“First of all, there was some growth,” UofL head coach Kenny Payne said. “It wasn’t all bad. We lost that game by one. If you go back through from the beginning to the end, there were 20 possessions that were wasted. There were defensive lapses that we just gave up on. I am saying this to the guys in the locker room, ‘possession by possession defensively, make it as hard as you can’. Let me say that again, ‘possession by possession defensively, make it as hard as you can’ for the opponent, especially on defense. The reason being when you give a team like their team, a very good passing team, not super athletic but really good at what they do, and you allow them to get wide open back cuts, offensive rebounds, wide open threes, they are just dissecting you apart. In order to sustain that, and get over that, you have to be really solid and disciplined. You have to know what they are doing. We weren’t real solid, we weren’t real disciplined, although we were disciplined in spurts.

“They deserved to win. They are a well-coached team that out-coached us, the players out-played us, they were the aggressors who put us on our heels. They get a 10-point lead, a team like that, that makes 12 to 15 passes, you better understand how hard you have to defend – or you lose by one point.”

Bellarmine’s last points came on a basket by Garrett Tipton with 4:41 to go, followed by a late surge from Louisville.

Redshirt freshman guard/forward Mike James buried a 3-pointer with 1:01 to go to make it a one-point game. Neither team scored again as the Knights (1-0) held on for the victory.

“I think the difference was down the stretch, we became more desperate,” James said. “We knew we had to make a run and we were down 10, we knew we had to make a run at all costs. We just couldn’t let them get an easy look so we just became more desperate. That’s what Coach Payne was telling us. We have to pitch a shutout. We have to become more desperate and play like our lives depend on it. I think if we play like that from the tip all the way through, we’ll be a very good defensive team. I think we’ll see different outcomes. Give them credit. They hit some tough shots. They ran their offense. They stuck to what they know. But I think if we just carry that over to the next game, how we played like those last five to eight minutes, it will be fine.”

Withers led Louisville with 17 points, while James had 16 points in his college debut – the fifth-most ever by a Cardinal freshman in their first game.

The Knights eventually led by as much as 14 with 6:51 to go in the frame and 41-30 at halftime before the Cardinals started to chip away.

Bellarmine countered with an 8-0 run to extend the lead back to 67-55. Those were the Knights’ final points of the game, but it was enough to secure the win.

The Cardinals continue a three-game homestand to open the regular season against Wright State at 1 p.m. ET Saturday at the KFC Yum! Center. The game will stream on ACC Network Extra.

“We want to win every game,” Huntley-Hatfield said. “We want to make a statement every night. We are going to look at the film, correct the mistakes. We have to take more pride in our defense and have more pride in our discipline. Fix these mistakes. Watch the film. Go back to the drawing board. Have good days at practice for the next few days. And then we’re going to come out on Saturday and show it.”