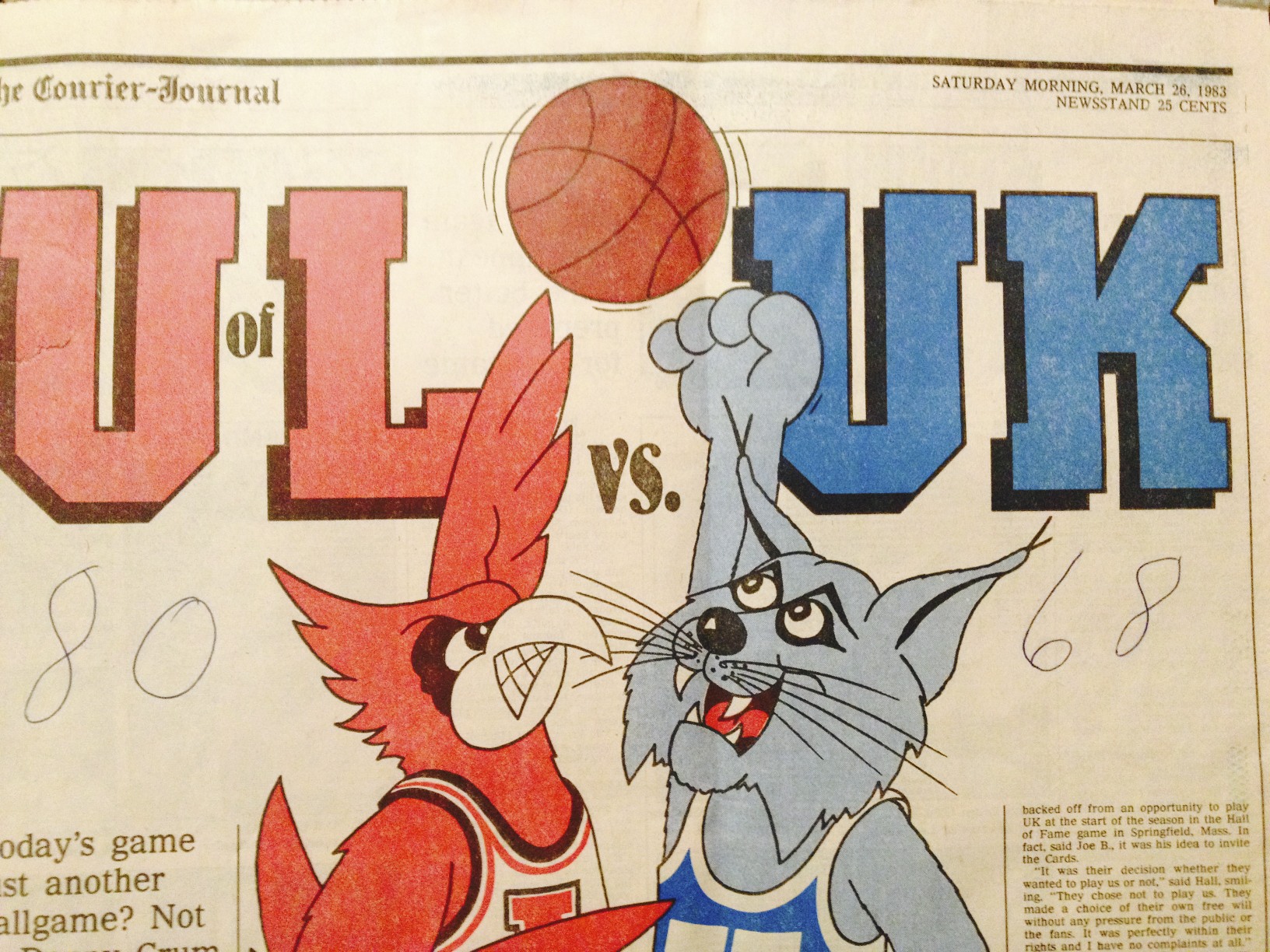 Louisville and Kentucky meet again in the NCAA tourney.  The last contest won by the Wildcats in New Orleans in the 2012 Final Four.  This time it’s the Sweet 16, but the stakes are just as high.  I thought I would go back to “the game that got this Rivalry going” and dig up some old stories.  Thanks to @snicklefritz35, she gifted me some serious history to use including; Pre-Game C-J, the game day program, and post game The Louisville Student Newspaper.

“Today’s ballgame just another game? Not to Denny Crum or the fans”.

** I need you to sit down, because you are not going to believe the opening line.

“When asked by reporters about what he might say to UK’s Joe B. Hall before today’s dream game, UofL coach Denny Crum said: “We both like to fish, so we might talk about some fishing spots down in Central Kentucky. Or, I might ask him to play golf or gin or something, I need the money.”

** So, I guess its safe to say the fishing conversation went pretty well?  Of course, there was an excerpt on UK refusing to play UL. Billy Reed discusses Crum’s frustrations.

“What bothered Crum – and still bothers him down deep – isn’t so much that the teams don’t play. It’s UK’s smug, arrogant, condescending attitude. Crum is man enough to take his defeats in stride, but he’s such a competitor that he is offended by someone who simply refuses to play”.

“We hear that all the time”, said UK’s Jim Master, when asked about playing UofL. “We don’t make the schedule up. Emotions will be high whether you are playing Louisville or North Carolina or whoever. But Louisville tends to psyche you up a little more because they are in the same state”.

Article Title: “Okay, UK, what is your excuse now” 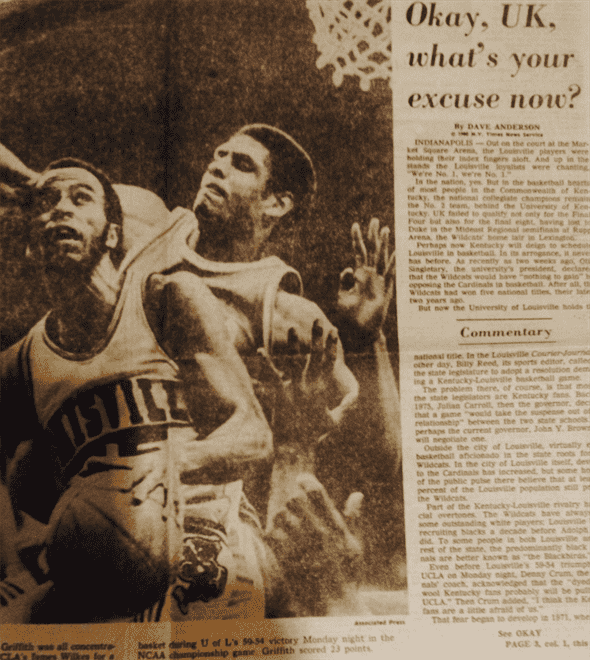 Billy Reed writes; “The Dream Game almost happened last year, but Middle Tennessee got in the , ah, middle but upsetting UK. Yesterday UofL’s Charles Jones was asked if he had been disappointed. ‘They (UK) might have been,’ said Jones, ‘but I don’t care who won or lost'”.

** Apparently UK did offer UL an opportunity to play, but let’s just say it was an “opportunistic invite”.

“It was their decision whether they wanted to play us or not,” Hall said.

** This is was in reference to opening the season in the Hall of Fame game in Springfield, MA. It was said to be Hall’s idea to invite Louisville.

Coach Hall: “They chose not to play us. Thy made a choice on their own free will without any pressure from public or fans. It was perfectly in their rights and I have no complaints at all”.

** The catch? Crum was saying that Hall wanted to get the UL monkey off his back, and invited the Cards to play after the Cards lost 6 seniors, and UK was expecting their full team back including  7″ 1′ Sam Bowie.  So, UL with a brand new team, all young, and game 1 of the season.  For those of you who thought Joe B Hall wasn’t smart, you can see he was.  Coaches are hilarious.

“My name is Tucker, not Sucker,” said Crum. “I have been around this game awhile. I’m not that dumb.  He wanted the best of all worlds. I don’t blame him for trying, but I wasn’t born yesterday”.

Yes, THAT Rutherford, both sporting beards. 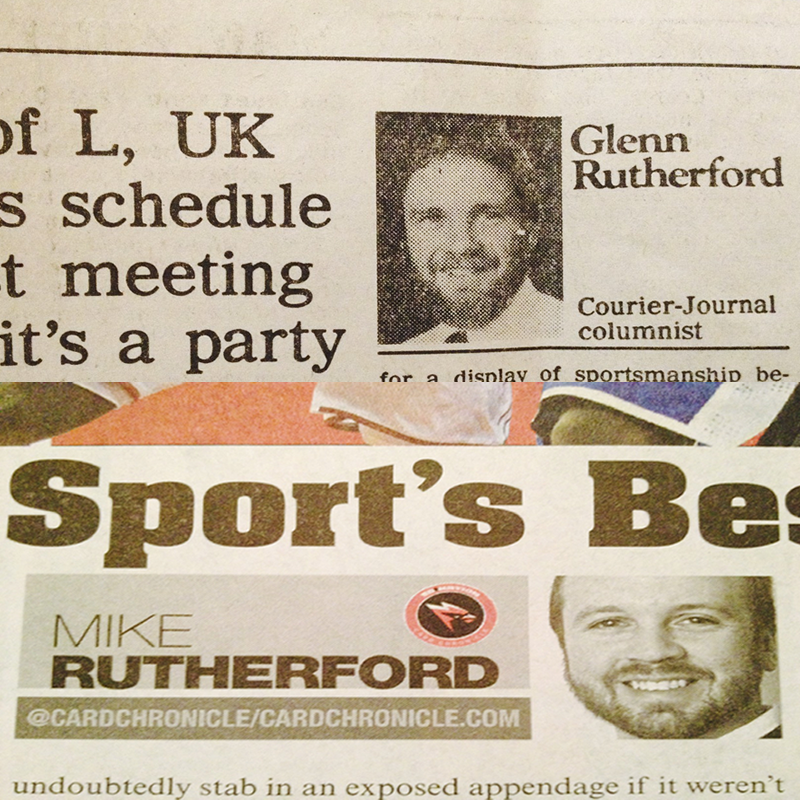 Paraphrased: After  years of avoiding the game what did the school’s decide to do?  Have a party.  They brought the fan bases to together at the UK team hotel.  About 750 people showed up, and said to be 2/3rd’s red, although UK’s direct of information services (SID?) didn’t agree “Oh, I think it is about 50/50. That Red just shows up better than Blue”.

“Regardless of head count, the reception was a good opportunity for a display of sportsmanship between the two schools. And sportsmanship is something fans on both sides tend to forget now and then”.

**Nothing has changed.  There was some talk on if the UK and UL fans would “co-mingle” appropriately.

“The people on both sides are too intelligent of that kind of nonsense. They will jus play the game, and that will be that.” UK fan Doothy Jenkins says. The Security people at the University of Tennessee Stokley Athletics Center are hoping she’s right.

Paraphrased: 24 years prior, on Friday the 13th, Louisville defeated UK.  It was a game that didn’t get much ink, even in Louisville.  UK had four titles in their trophy case, and were THE university in Kentucky.  What happened?  Trailing by 15 points in the first half, Louisville outscored Kentucky 62-32 over the games final 29 minutes.  Later questioned about the game “What do I think of that Louisville team?Why i think they gave us a helluva beating”.  Kentucky went on to finish #2 in the ills that season.  Louisville lost in the Final four to Jerry West’s West Virginia team in a game played at Freedom Hall.

Yes, MidEast, not to be confused with the Middle East, and certainly not Middle Earth. 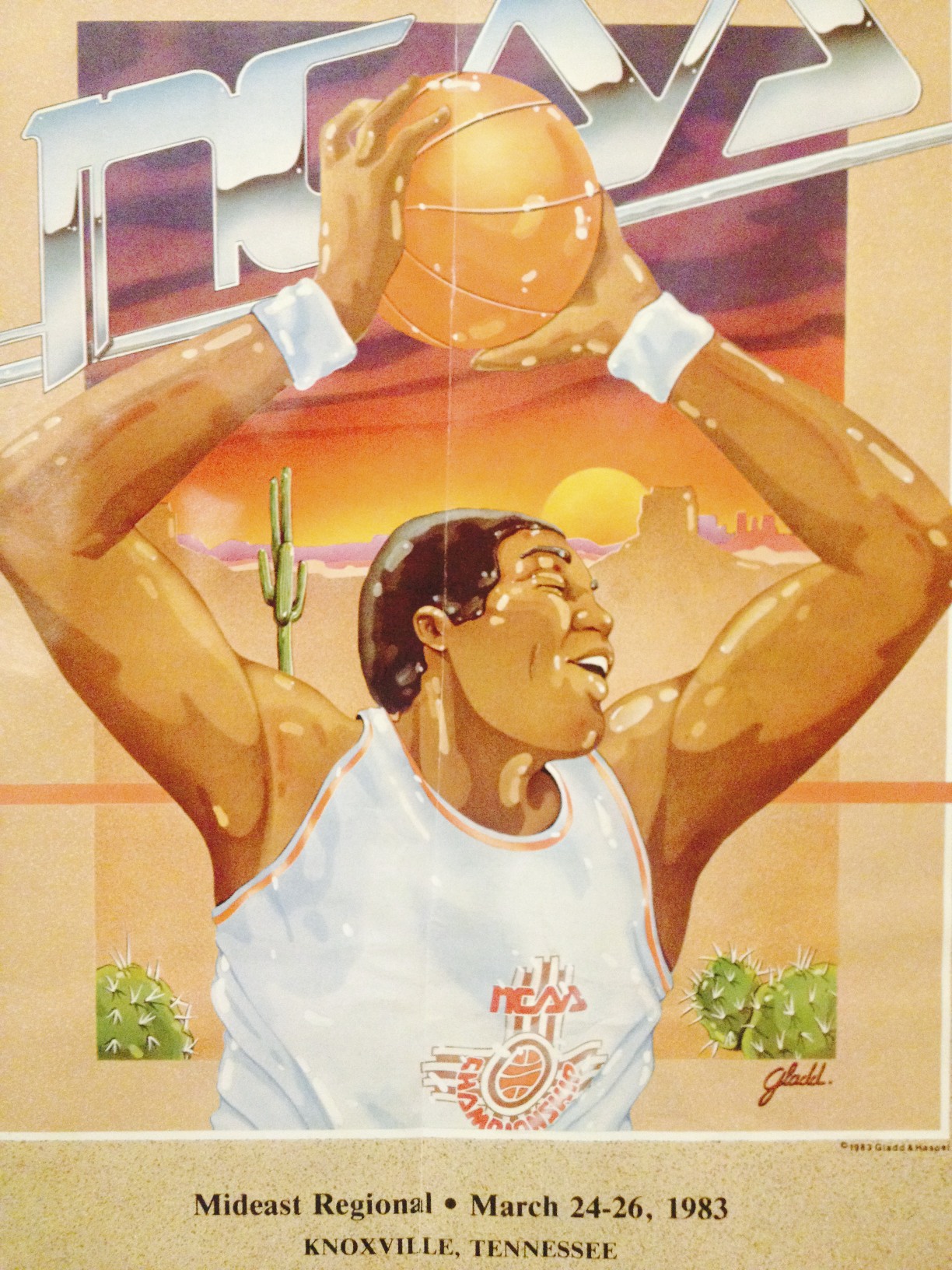 1983 Mcdonald’s All American team (not listing them all);

A lot of memories in those guys, but as it relates to the UK vs. UL rivalry – Winston Bennet made the big news as a rare instance of an African-american from Louisville going to play in Lexington, since UK was fighting a bit of a “reputation” in the public’s eye. 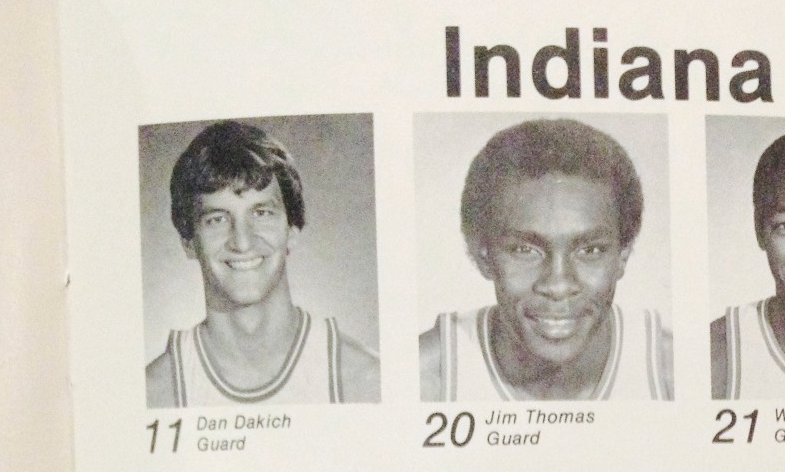 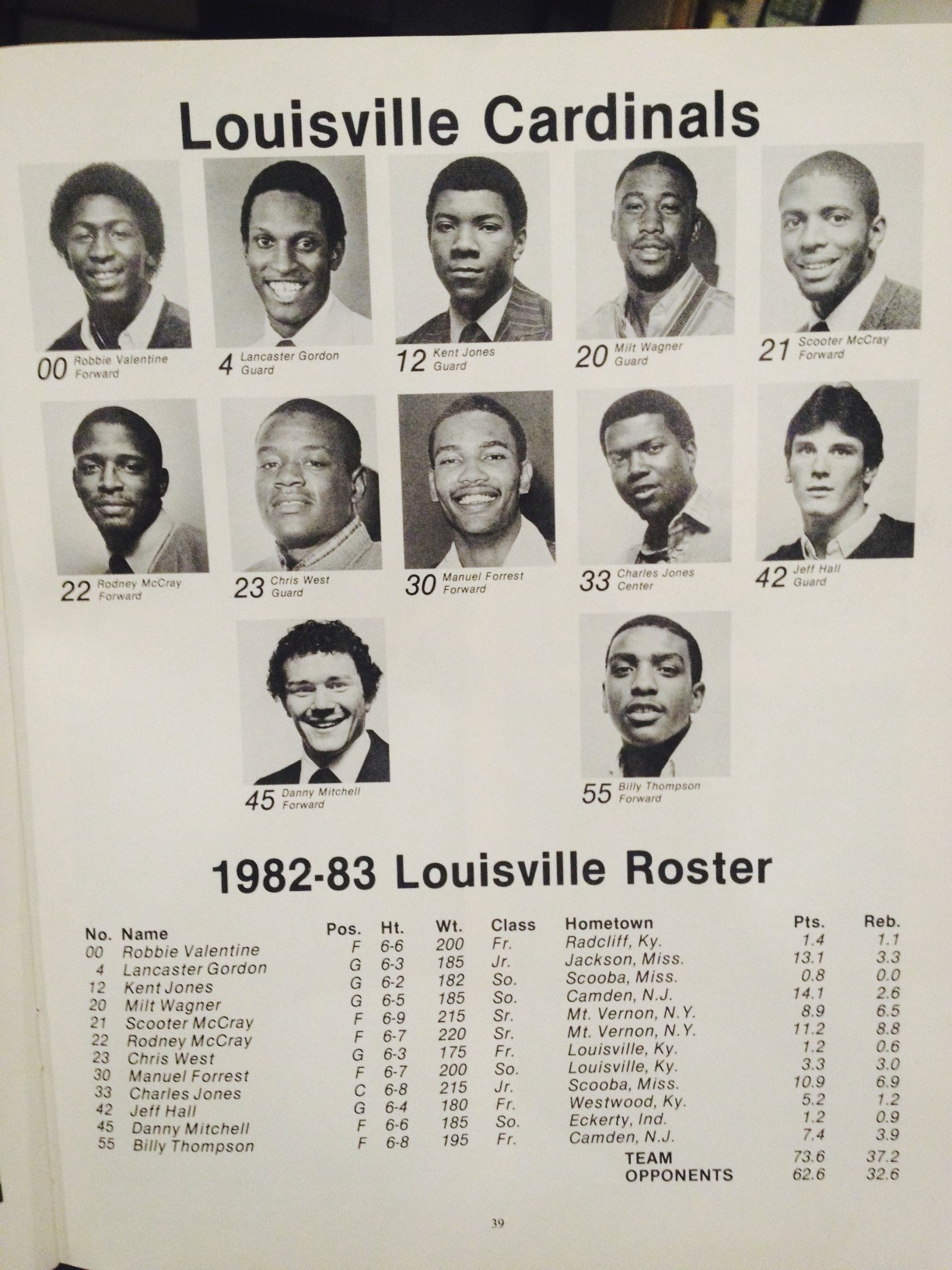 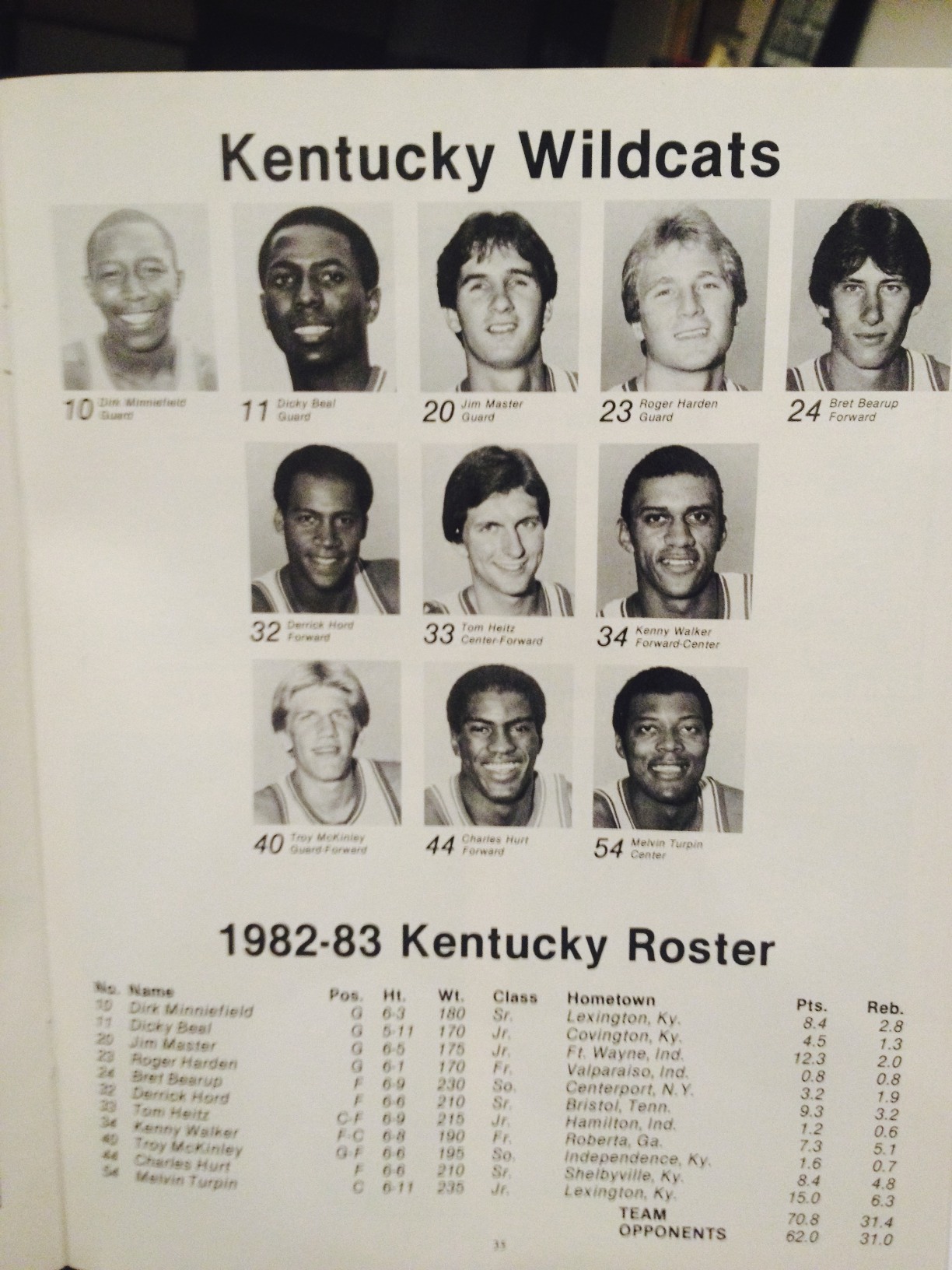 Cons baby, Cons ruled the world. UK and UL both sported them. 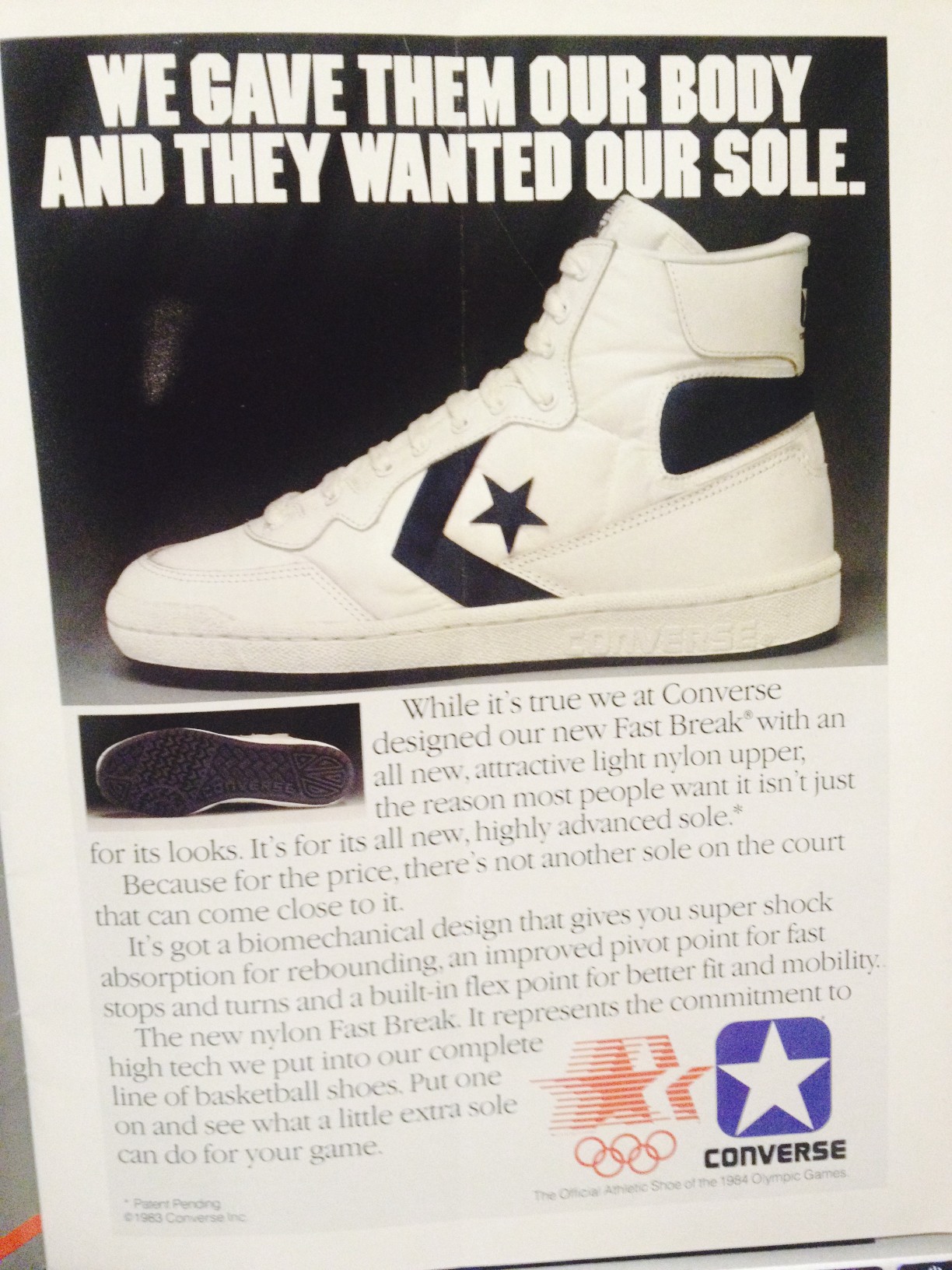 I guess this was before performance enhancing drugs?  I don’t know. 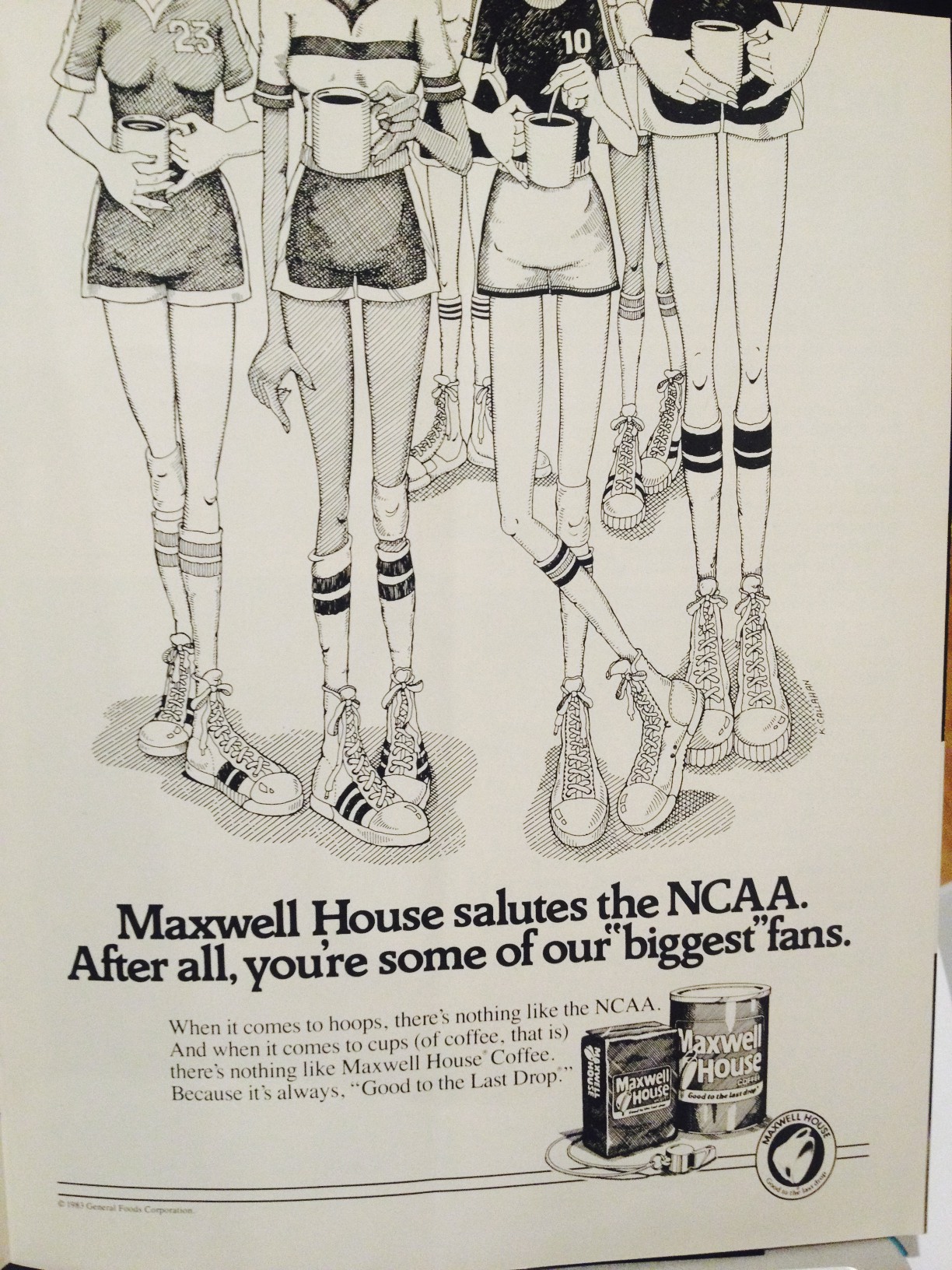 *Did you know the LadyBirds first year was 1983?

The melody of “Goody Two Shoes (Adam Ant) sounded from a cassette recorder. “It’s too fast”, said Joan Stewart, “you can’t do anything to it”. The three were determining the music to be used at next years tryouts.

Later the article goes on to say, “I don’t want to give anyone the ice that were sex kittens out on the floor,” Stewart said.

**Cheerleader vs. Lady Birds in year one?

One of the rumors has been the supposedly strained relationship that the Ladybirds have had with the UofL cheer-leading squad. “When there are two performing squads, naturally there will be problems,'”said Stewart.

**I won’t go on, but I will say nobody was seriously maimed. 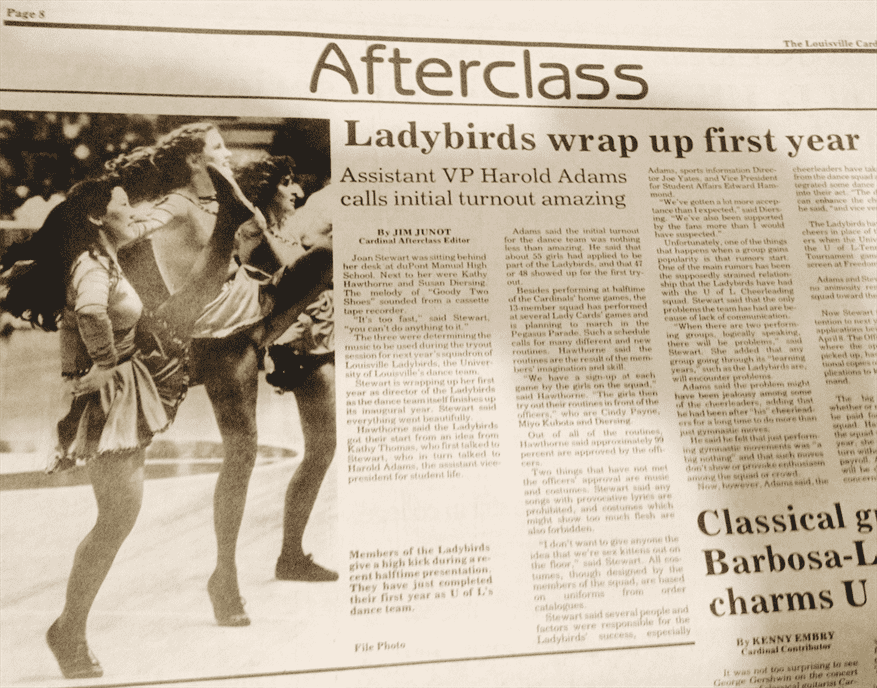 “Knoxville becomes Red for a day”

He who cheers last, though, cheers best. Louisville’s awesome display of in-your-face offense during the overtime left the Cat fans with their mouths agape. Cardinal fans realized the sweetness of the moment, and responded enthusiastically when Rodney and Scooter led cheers. U of L fans knew that this Dream Game was in the bag and tat Akeem “The Dream” loomed in Albuquerque.

*Yes, there was some back and forth on how Hakeem/Akeem spelled his name.

The Cats lost because after halftime the U of L press was at its terrifying best. UK committed 14 of its 18 turnovers in the second half and OT, giving U of L easy shot after easy shot. The Cards, after a 4-21 start, hit 30 of their last 36 shots, an unbelievable 83.3%. In OT UofL was 6 for 6 from both the field and the charity stripe.

Gordon, Scooter, Turpin, and Master made the All Tournament team, along with Darrell Walker of Arkansas.  Gordon was also name the Region’s  MOP.

Cartoon From The Student Paper

This tells the story in chilling fashion. 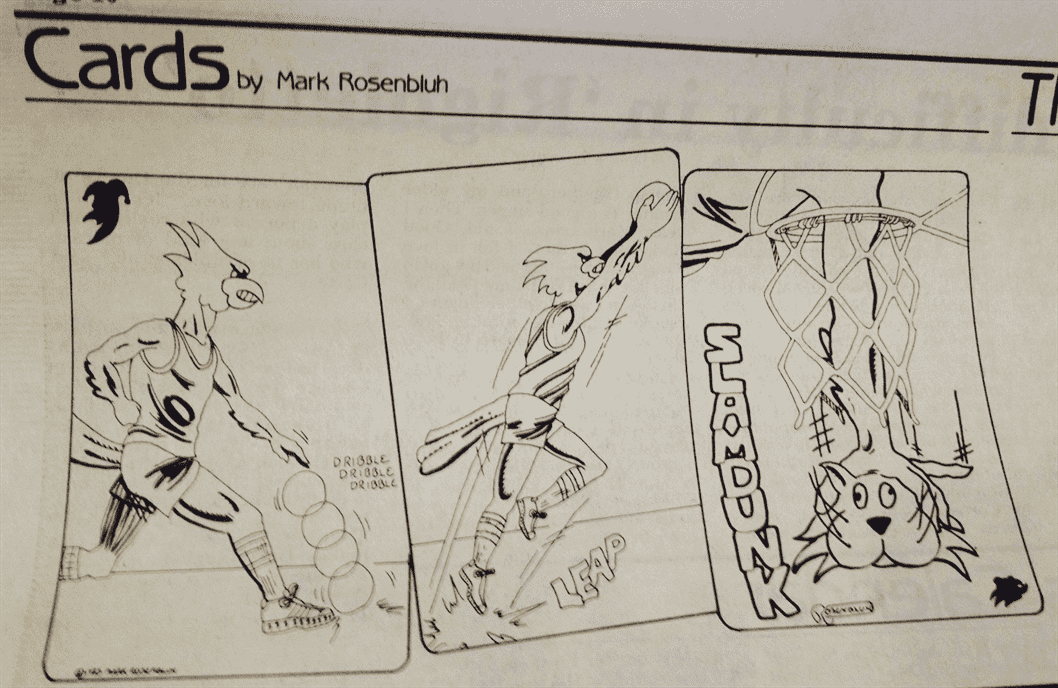 How about the programs 1,000th victory?  Nothing says 1000 victories like this random photo below.

Wonder why we are celebrating 100 years of basketball with this photo saying 1912?  The younger Rutherford in this article passes along that the 1916-17 & 1922-23 seasons were canceled, mystery solved. 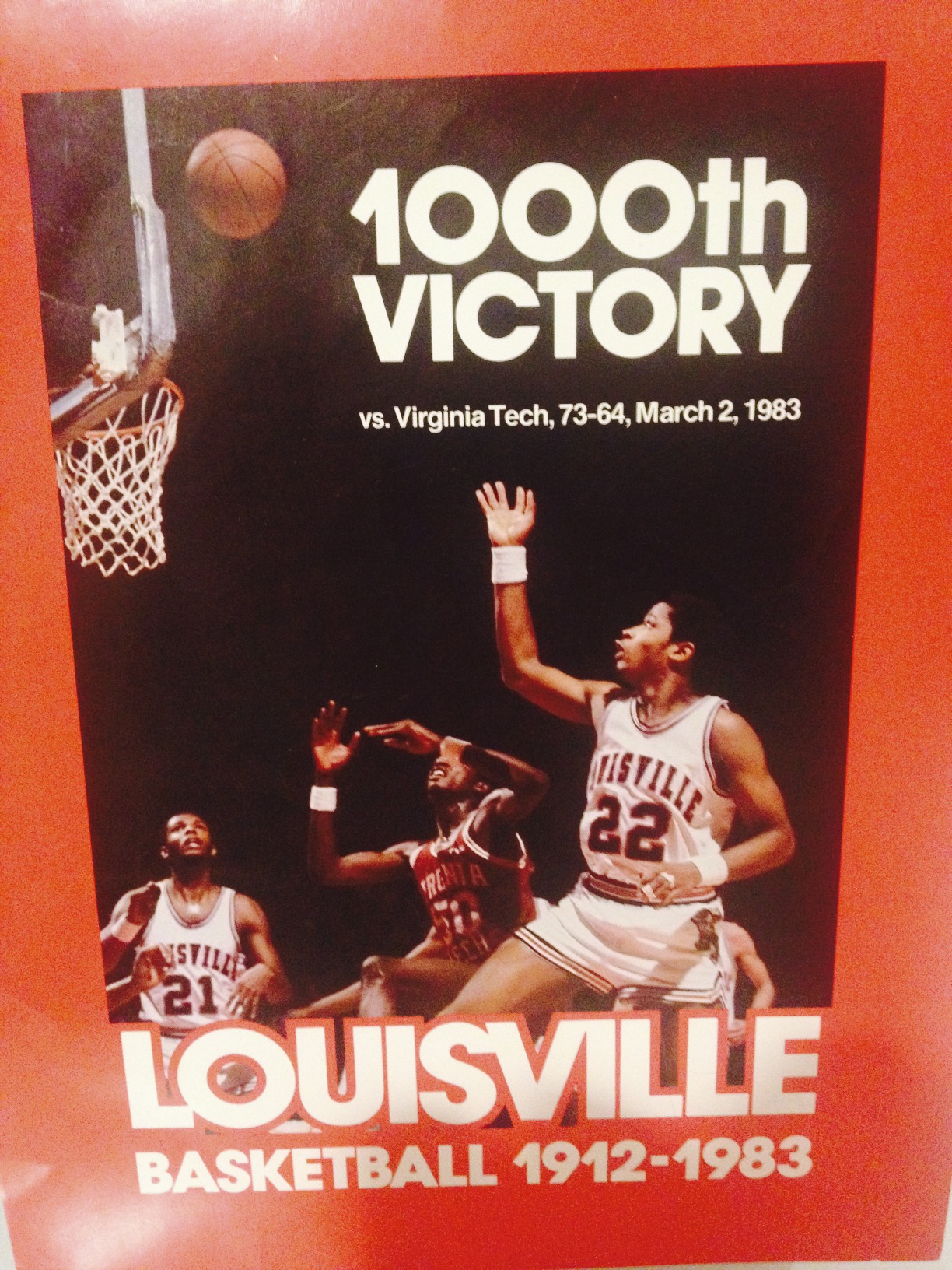 I learned trash talking DURING the Dream Game.  At halftime, with Louisville down,  a Kentucky friend of mine called me.  We were both about the age of the picture shown below (I am holding a pail).  He was yelling, screaming, laughing, and carrying on how UK was awesome and UL was terrible.

I called him back at the end of overtime….to disagree.

You can’t tell, but that’s me wearing the 1980 champs shirt. 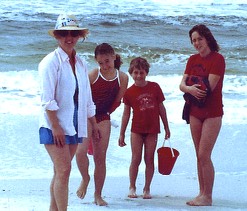 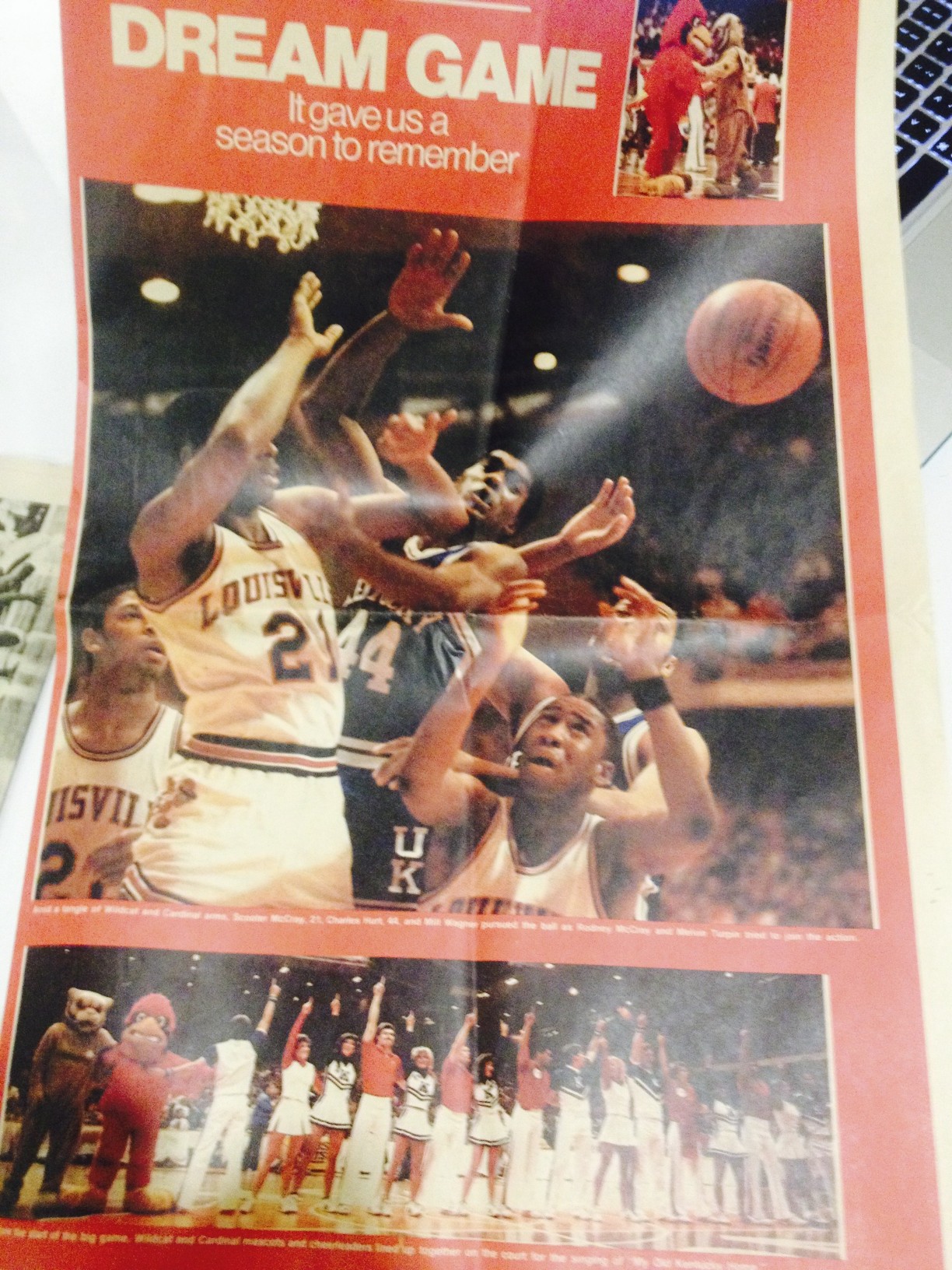 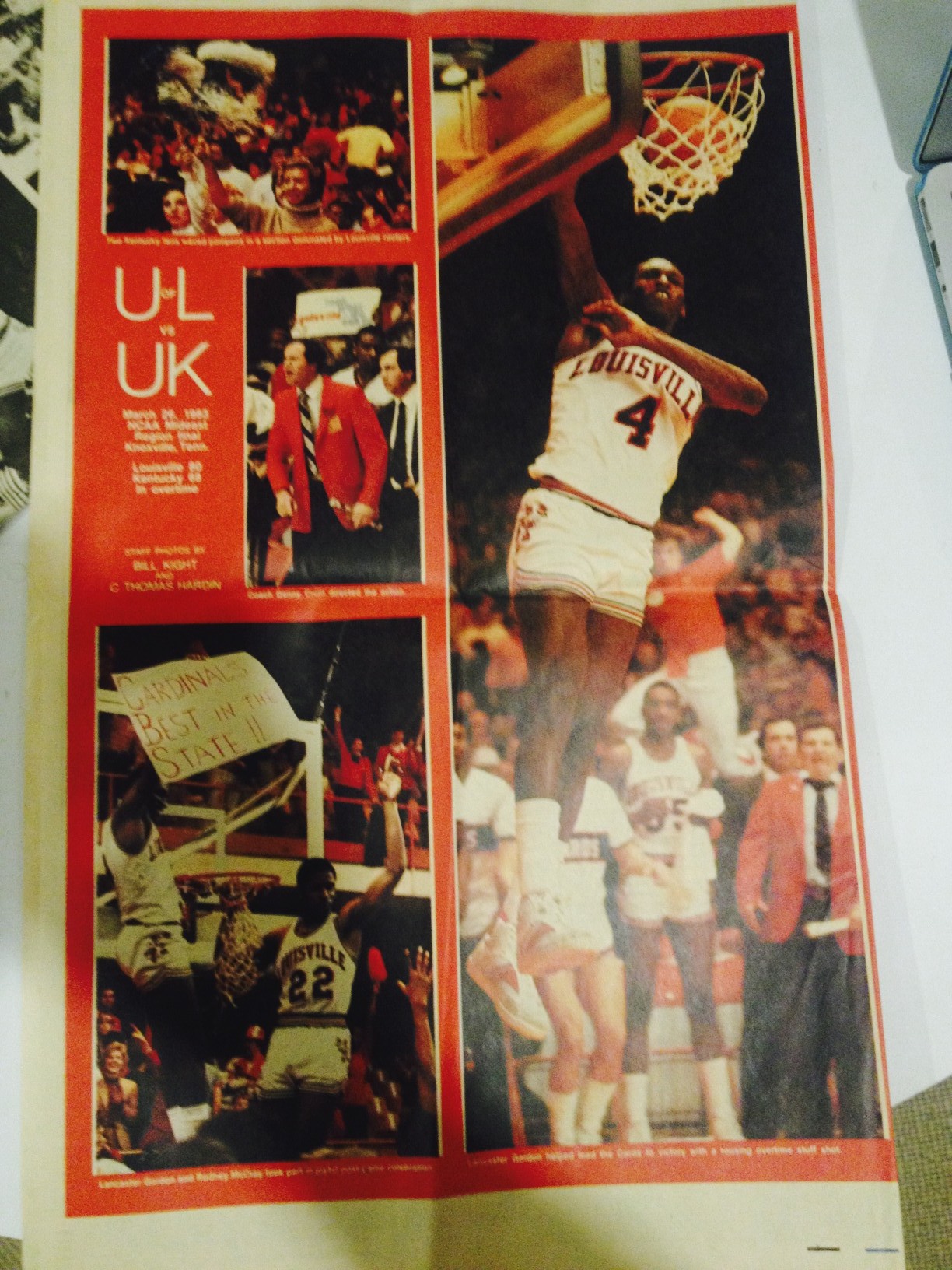 Dream Game Superstar Scooter McCray and I a the ESPN680 Launch party. He is the taller one. 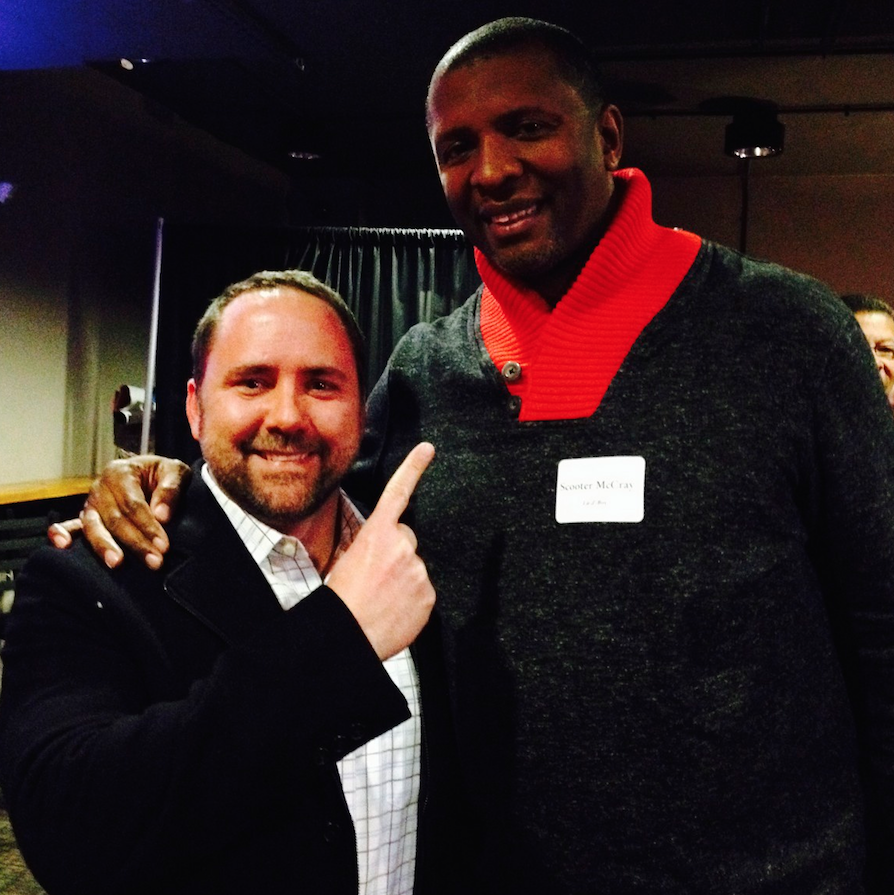 This was always a special day to my Mom, and while “Rest in Peace” is something most should say, I know this is not the day for resting for Mom.  Let’s gett’em she’d say. 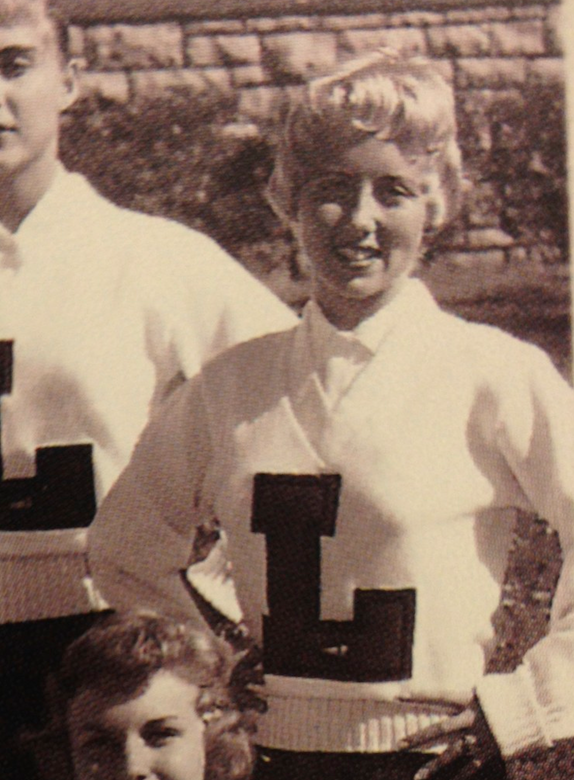 It’s game day folks.  Sure we aren’t big fans of the big blue, but there is so much history to appreciate.  This is just one game, “The Dream Game”, but how many players, moments, and stories have we forgotten along the way.  Perhaps its better to sit back and appreciate the history a little more than we do.  A little less trash talking.  A little less trolling as its’ called these days.

In the words of my mom, and MILLIONS others everywhere  in the universe, Go Cards.