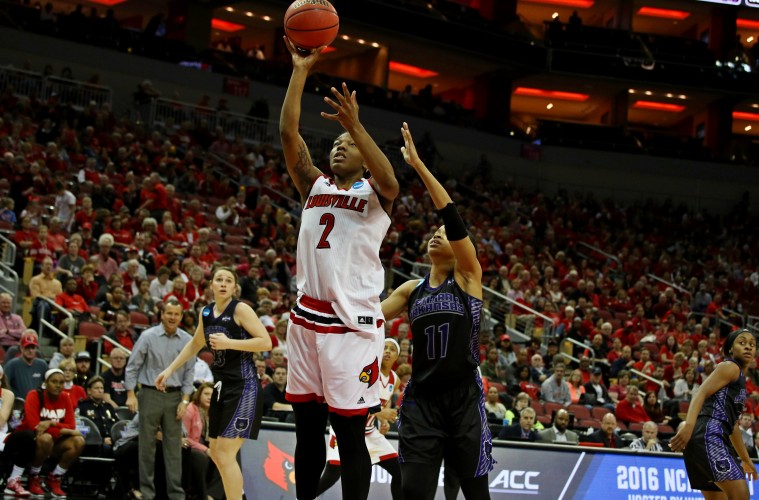 The two will see each other again this fall – from opposite sidelines – when the Cardinals and Gamecocks headline the Naismith Memorial Basketball Hall of Fame Women’s Challenge on Nov. 27 at the MassMutual Center in Springfield, Mass.

“It’s an absolute honor to be part of the Basketball Hall of Fame Women’s Challenge,” Walz said. “Our team is really excited about playing in a tournament of this caliber with some terrific teams, and we are looking forward to traveling to the Mohegan Sun and facing a remarkable South Carolina program.”

The eight-team event, announced on Thursday, also includes Nov. 27 games that pit Hampton against Lafayette, St. Peter’s versus Bowling Green, and Maine against Chattanooga. All event proceeds will benefit the non-profit Hall of Fame’s educational and operational fund.

The week prior, Louisville will serve as a campus-round host. The Cardinals face Bowling Green State on Nov. 19, Lafayette on Nov. 20, and then Chattanooga, which posted a 24-8 record last year and advanced to the NCAA Tournament, on Nov. 21.

The last time Walz and Staley shared the court, they were hoisting gold medals after beating Russia in the 2015 FIBA U-19 World Championships in Chekhov, Russia, to a cap a 7-0 tournament run. The year prior, with Walz again serving as an assistant under Staley, USA Basketball defeated Canada in Colorado for the FIBA Americas U-18 Championship.

Both coaches also have enjoyed a wealth of success at their respective schools.

At Louisville, Walz is coming off his sixth-consecutive 20-win season and boasts a 234-85 mark in nine seasons. He led the Cardinals to their sixth-straight NCAA Tournament last season, with two that have culminated in national runner-up finishes.

The Cardinals return all five starters from a season ago in which they went 26-8, including Atlantic Coast Conference Player of the Year and All-American Myisha Hines-Allen. The rising junior averaged 17.6 points and 8.4 rebounds, while shooting 54.7 percent from the field. Classmate Mariya Moore, who played on the two gold-medal winning teams, contributed 14.1 points and 4.3 assists.

Staley, meanwhile, has directed South Carolina to five NCAA Tournaments – including a Final Four showing in 2015 – and a 188-76 overall record in eight seasons.

The Gamecocks return starters A’ja Wilson and Alaina Coates from last year’s team that went 33-2. Wilson, another member of the gold medal teams, led South Carolina in scoring (16.1) and blocked shots (103), and Coates produced 12.1 points on 64.4 percent shooting and a team-high 10.3 rebounds.

South Carolina holds a 16-4 series advantage, with this year’s matchup marking the first contest since a 74-47 Louisville victory on Nov. 29, 1991, in the Downeast Women’s Basketball Classic in Orono, Maine.

Game times, broadcast, and ticket information for the Basketball Hall of Fame Women’s Challenge will be released at a later date.