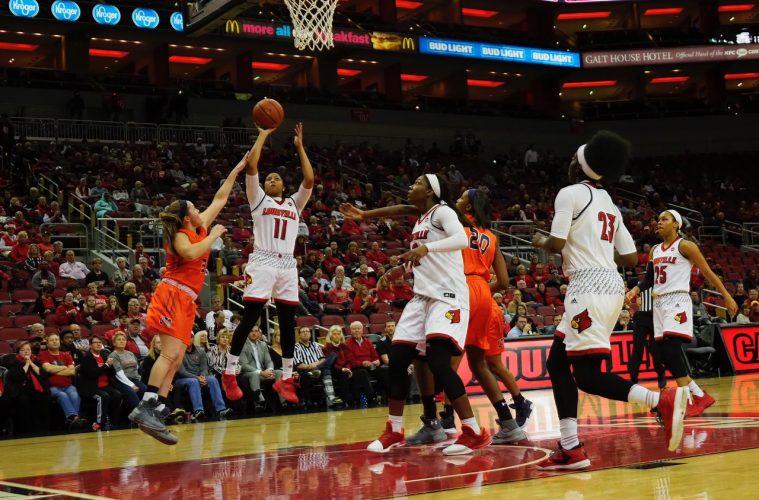 Myisha Hines-Allen and No. 4 Louisville kept up their impressive start this season with a fast start against UT Martin.

Hines-Allen scored 16 points, and the broke away early to cruise past UT Martin 91-56 on Tuesday night. It marked the seventh time this season Louisville won by more than 10 points and the fifth time it won by 25 or more.

Coach Jeff Walz is especially pleased with how his team is doing, considering the Cardinals have played three ranked opponents and a couple tough mid-major schools.

Against the Skyhawks (3-5), the Cardinals closed out the first quarter on a 16-2 run to build a 29-9 lead in the final minute of the period. The spurt was spurred by reserves as the Cardinals scored 14 points after Walz made three substitutions with 4:24 left in the quarter.

The Cardinals shot 17 of 32 after halftime in extending their lead. Asia Durr and Jazmine Jones each added 14 points for Louisville, which had five players finish in double figures.

Louisville shot 52.3 percent for the game and dished out 21 assists on 34 baskets. UT Martin, meanwhile, shot just 32.8 percent and committed a season-worst 22 turnovers.

UT Martin: The Skyhawks entered the game as one of the worst defensive teams in the country, with their 73.7 scoring average against tied for 301st in Division I. Louisville exploited that weakness by topping 90 points for the fourth time this season.

Louisville: The Cardinals took full advantage of their size to overpower the Skyhawks. At the beginning of the game, UT Martin resorted to using Kendall Spray, a 5-7 guard, to defend the 6-1 Hines-Allen. Mismatches like that allowed the Cardinals to post a season-high 10 blocks and outscore the visitors 44-20 in the paint.

Arica Carter scored 10 points for the Cardinals, marking the second consecutive double-digit scoring game for the junior and just the fifth of her career.

She sat out last season recovering from a groin injury and while she has started all nine games this season. The 5-8 point guard said it’s taken some time to realize where she fits in on the team, especially within the offense.

It appears Carter’s figuring it out. Although she’s shooting 44.2 percent through the first nine games, she’s made 10 of 15 shots in her last two games. Walz said that’s due to her finding her range. All of Carter’s field goals Tuesday came within 15 feet of the basket.

The Cardinals play two more times before the next poll is released, but barring a loss later this week, Tuesday’s performance should keep them perched no worse than their current ranking

Louisville: The Cardinals also have a short respite as they return to the court Thursday evening to face Vanderbilt.