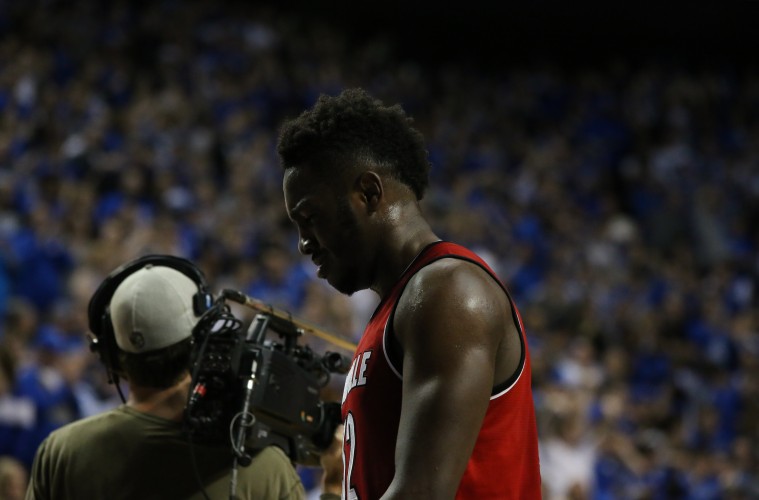 Who’s Got Their Back?

There was crying in the team meeting.

The 2015-16 Cardinal Basketball team was told that their leadership was imposing a post-season ban on THIS team.  The ban comes from allegations made from a book written about a time that didn’t involve any of these players.

Trey Lewis started his career at Penn State, moved to Cleveland State has also never played in the NCAA Tournament.  Now a Cardinal, Lewis has been the source of comfort for Pitino and Leadership for this current Cardinal team.

4 weeks away from the ACC Tournament, now Lee & Lewis’ dreams are crushed.  Their teammates are surrounding them and the “L & L Boys” hopes are now over……….for violations committed by someone else.  Someone no longer here.  Someone who clearly isn’t a Louisville Man.

Chinanu Onuaku too is having an incredible season for the Louisville Cardinals.  Nanu has a decision to make at the end of the season and now will miss an opportunity to showcase his work and development in the ACC & NCAA Tournaments.

So here we are…….administrators felt it was necessary for the program overall to move forward with a post-season ban immediately and get this scandal behind the basketball program and the university at-large.   And that may be the prudent thing to do.

But I’ve got one question:  Who’s Got The Player’s Backs?

None of these kids were here when these actions took place. It seems wrong.  Andre McGee got to have his full four years of college basketball and was able to play in 3 NCAA Tournaments and advance to 2 Elite 8s.

The events of today will frustrate fans of Louisville and anyone who seeks justice. Fans will try and find the ‘right’ in all of this.  It’s not what Rick Pitino & Tom Jurich stand for.  It’s not the character of these players….but it’s their burden to carry.

Fans have an opportunity to show their support for the entire Louisville Basketball roster tomorrow and for the remaining season.  We’ll see how the Cardinal Faithful react with their support with their time they have left.  It’s all Trey Lewis & Damion Lee have now.

After the North Carolina win Damion Lee said, “I have ONE MONTH left of regular season College Basketball left. I want to soak it all up and try and enjoy it as much as I can”…..and that’s all he has left now because of something outside of Lee’s control.