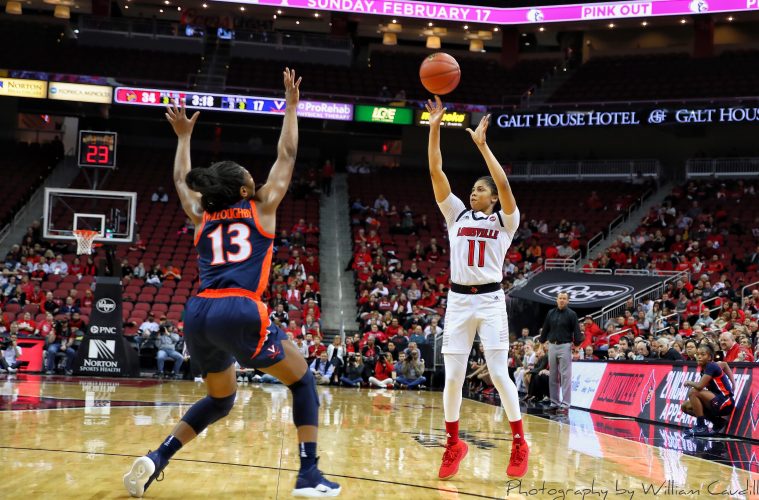 The game plans for both teams in Thursday’s match-up of #4 Louisville and Virginia were simple and obvious. For Louisville, don’t repeat what happened the previous Sunday versus Miami. For Virginia, attempt to do exactly what Miami did to Louisville the previous Sunday. For a time, it appeared as if the Cavaliers might succeed. But a strong second half from the Cardinals proved too much for Tina Thompson’s crew as Louisville cruised to a 71-49 victory.

The game began with a very aggressive Virginia team taking obvious lessons from Miami’s strategy against the Cards, and finding success in doing so. Excellent ball movement and cuts to the basket found the Cardinals defense flat-footed early on. For a time the Cavaliers’ spark and Louisville’s continued shooting woes seemed to spell potential disaster for a Cardinals team attempting to avoid its first two-loss streak in over two years.

Tied 14 to 14 at the end of the first quarter, the Cavaliers embarked on a 10-0 run to make it 24 to 14 by the 6:47 mark in Q2. Virginia forward Lisa Jablonowski averages 6.3 PPG but had 7 points in the first half on her way to a 13 point, 5 rebound night. Jocelyn Willoughby continued her recent level of contribution as she notched her fourth-consecutive double-double and joined the Cavaliers 1,000-point club with a 16 point, 13 rebound night.

The Cavaliers’ strategy of working off screens was still paying off even as the Cardinals’ defense and shooting started to come around. As such, what had been a 10 point lead dwindled to 3 as both teams entered the locker room at the half. Asia Durr was 1 for 7 with only 2 points while the Cardinals were 3 for 16 from three-point range, with Dana Evans keeping the offense alive on 7 points thanks to two three point baskets.

Louisville would need an offensive spark to match their defensive efforts. Just over a month ago at the KFC Yum! Center the Cardinals had taken a 26 point lead into the locker room at the half. While credit should be given to Virginia for their steady improvement under hall of famer Thompson’s guidance, it appeared as if Louisville had simply been out-hustled this time around. Virginia’s dominance on the boards and in the paint was primarily thanks to superior effort, as they won the glass 23-11 to garner 10 second-chance points.

But it was a different Louisville team that took the court to start the third quarter, extending what had been a mini Q2 run out to a 16-0 run as they held Virginia scoreless over 7:00 of playing time. A 34% shooting first half quickly morphed into a 66.7% shooting third quarter as the Cardinals outscored Virginia 23-9 to take a 48-37 lead going into the final quarter. Four other Louisville players would eventually join leading Cardinals scorer Dana Evans (13 points, 6 assists) in double-figure scoring as the offense got rolling.

While the Cardinals improved their three point shooting (finishing 10 of 27) it was good to see a second half focus on aggression in the post, as Louisville closed the rebounding margin and eventually bested Virginia 32 to 30 on points in the paint. Meanwhile, the Cavaliers’ offensive options were limited as second leading scorer Toussaint spent most of the half on the bench with foul trouble. Early into the fourth quarter it was clear that Virginia had been worn down and had no answer for the Louisville onslaught. As such, the Cards cruised to victory led by Asia Durr’s 12 and Dana Evans’ 13 points respectively, bolstered by a combined 31 points from the post play of Fuehring, Dunham, and Shook.

The worrisome aspect of this game is simply the slow start. It was a near repeat of the blow-out against Virginia in January except for the fact that Louisville played to that level only in the second half. Against a team like Virginia this can be managed, but up against Notre Dame, Miami, or even N.C. State it won’t be as forgiving. We’ve seen repeatedly that Asia Durr’s scoring slumps are easily countered by her teammates’ offensive efforts. But when Asia Durr is on, it’s hard to stop the Louisville juggernaut. As March approaches, Jeff Walz and staff will surely have their team in the gym as often as possible to work out those shooting jitters in preparation for tournament play.

But a win, is a win, is a win. The Cardinals improve to 24-2 and 11-2 in conference play. Notre Dame handled Duke tonight and remains in sole possession of first place, while a Miami team that bested Louisville on Sunday found themselves on the wrong side of a 73-65 contest against a 4 and 9 in conference Virginia Tech. Thus, Louisville finds themselves securely in second place in the ACC with three games remaining. Women’s basketball returns to the KFC Yum! Center this Sunday, February 24 at 2:00 PM against Boston College.

Fingers crossed as Notre Dame takes on a decent Syracuse team on Monday. You never know. Stranger things have happened.