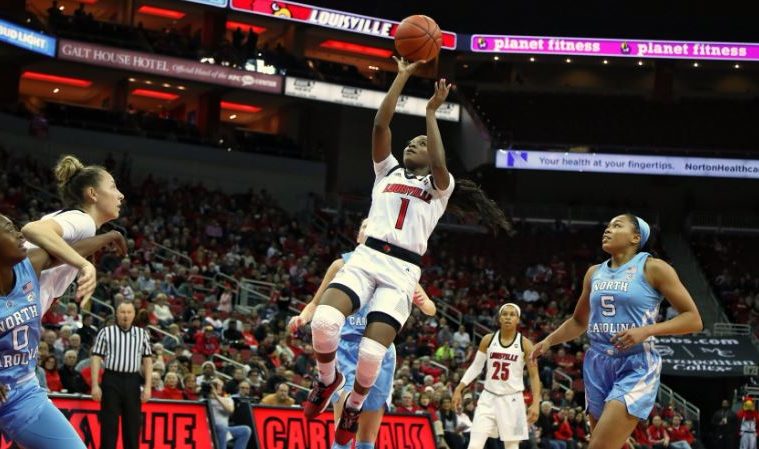 Jeff Walz and the Cardinal women entered conference play against the non-ranked Tar Heels on Thursday night at the KFC Yum! Center, and all expectations were cast against a Louisville team averaging 85.7 PPG. After an impressive first half the Cardinal faithful would be forgiven for thinking things were well in hand, but the Tar Heels would claw back in the second half to give the Cards their first taste of a brutal ACC schedule. Walz himself had called out his team’s focus on offense at the expense of defense in the weekly presser, but it was the Cardinal’s second half defensive woes that left Louisville counting their blessings after forty minutes.

A puzzling adjustment found Arica Carter on the bench as play began, with junior Bionca Dunham taking the starting spot. When asked about it post game Jeff Walz revealed that Carter had missed her flight back to Louisville at the end of Christmas break thus violating team rules. Dunham would go on to put in a solid shift, but the first half highlights belonged to starters Evans and Durr with Kylee Shook coming off the bench.

Both Evans and Durr made repeated and seemingly unstoppable drives to the rim, baffling UNC sophomore center Janelle Bailey. Bailey, along with the UNC offense, was rendered essentially ineffective throughout the half, with the Tar Heels managing only 23% from the field and a gutting 1 for 15 from beyond the arc.

Kylee Shook joined Sam Fuehring in dominating the post on both ends of the court. Shook would score eight in the first on her way to a double-double (10 points, 11 rebounds). Walz had specifically called out his squad’s poor rebounding margin prior to tonight’s game, and the Cardinals set out to impress by out-rebounding UNC 28-15 in the first half. Domination of the boards and domination in the paint had the Cards taking a 40-23 lead into the locker room at the half, marred only by nine first half turnovers.

But the Tar Heels refused to concede and Coach Hatchell’s halftime adjustments would prove to stymie what had been an effective Cardinal defense. Walz in the post game presser would say, “We didn’t guard. We decided not to guard.” The same Louisville defense that had given up only 23 points in the first half would give up 24 in just the third quarter, while the Cardinal offense would only manage 17.

Everything that the Cards had dominated in the first half was flipped, with the Tar Heels outscoring and out-rebounding Walz’s stunned squad. UNC’s senior first-team all-ACC guard #22 Paris Kea came alive in the second and joined three-point artist Stephanie Watts and a reinvigorated Bailey in making it a ten point affair at the end of the third. But what appeared as a minor setback would quickly turn into a near total collapse.

Shooting woes for the Cardinals were combined with a defensive breakdown in the post to bring the Tar Heels within striking distance in teh fourth. The UNC center Bailey had been nearly silent in the first half but had her way with the Cardinals down low throughout the second half. Bailey’s eight fourth quarter points put the fear directly into the Cardinal hearts.

A foul on the Cardinals in transition was followed by a strategic UNC timeout, which the officials used to review the previous play. To Jeff Walz’s obvious chagrin, the review resulted in a flagrant foul for Bionca Dunham from a supposed hold during UNC’s breakaway. The Tar Heels would sink both free throws and follow-up with a quick set piece basket and the Cardinal lead was cut to two. But even with the lead cut to two, Walz preserved his three time outs.

A risky move, for certain, with both Fuehring and Carter showing frayed nerves on several occasions. The UNC bench was living it up, even going so far as to mix it up verbally with the Louisville crowd at times. But to Walz’s pleasure, no doubt, the Cardinals would find the last full measure within. Louisville would garner 12 fourth quarter rebounds on their way to a 45-30 rebounding margin. Five Cardinal players would end up with scoring totals in the double digits, and consistent free throw shooting down the stretch sealed a 73-66 victory.

“I hate close games. I don’t need them,” Walz would say in the post game presser. “I’ll take an ugly win any day, and this kind of fit in to that.” As far as the second half collapse goes, “We have to mature emotionally, and we can. But it’s not going to happen overnight…we’ve got to be able to play a full 40 minutes.”

The coach and his squad will focus on the fundamentals over the next few weeks, with Walz specifically calling out a need for his team to get into the gym and work hard after the long Christmas break. The bright spot is of course tonight’s fifteen rebound margin, considering Walz had set a target of plus five per game going into conference play. But if the Cardinals hope to have any chance against the likes of Notre Dame, Syracuse, or NC State they’ll have to find a way to play a complete forty minute game.

There will be little time for a focus on instruction, however, as the Cardinals depart Saturday to begin a two game road trip. Next up are the Blue Devils in Durham this Sunday, January 6th followed by the much anticipated match-up with Notre Dame in South Bend on the 10th. Any repeat of tonight’s second half defensive performance would certainly spell doom for the Cardinals against the second ranked Irish. Whether Walz and the crew can find the formula for a complete game in under a week remains to be seen.