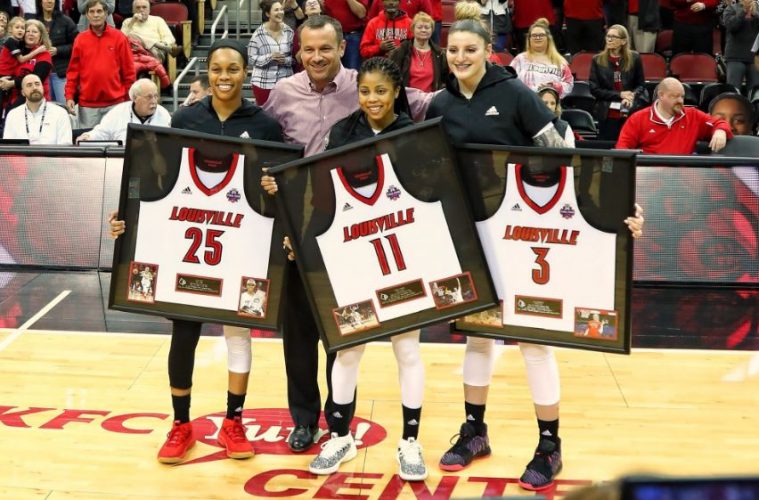 The clock stopped with 10 minutes remaining in the warm-up period. A hush came over the crowd as they rose to their feet. Arica Carter, Sam Fuehring, and Asia Durr took their turns walking to half-court where head coach Jeff Walz stood waiting with framed jerseys as video messages from their families played overhead. Each received thunderous applause from the early-arriving crowd. Perhaps the clapping shook loose some dust from the KFC Yum! Center ceiling and caused eyes around the arena to become watery.

But the toughest part was yet to come. The #3 Cardinals, led by their senior class, still had to deal with the #10 Wolfpack of NC State. On the line? Just a shot at the #2 or #1 seed in the ACC tournament and securing (for the Cardinals) one of the top four seeds in the NCAA tournament. No big deal.

Asia Durr agreed. No big deal. The senior and second-leading scorer in UofL history came out hot. Really hot. 22 points, 6 for 8 from three-point range, 73% shooting overall. That was just the first quarter. The Cards led 36-13 after 10 minutes. Then 7 for 10 from three-point range. Then 8 for 11. Then 9 for 13. Asia Durr had tied her own record for individual three pointers in a single game, shared with Shoni Schimmel. She was just six points shy of her career high 47 points. Just so happens that’s a school record as well.

Normally a fourth quarter featuring a 30+ point Louisville lead would have a steady stream of red-clad fans heading up the steps to beat the traffic. Not tonight. The KFC Yum! Center was thirsty. Tonight was Senior Night. It was Asia’s night. 6:56 left in the game. Evans to Durr. The shot, the swish. Asia Durr sets the Louisville women’s basketball single game record for made three pointers. A minute later…Evans to Durr. The shot, the swish. Asia Durr ties her career and the school’s single game scoring record.

You could feel the passion of every fan in the arena; it was manifest. They wanted that 48th point. They needed that 48th point. If they didn’t get that 48th point, they’d put on the jersey and stand at post. Alas, it was not to be. Jeff Walz had given Asia her chance, and with 3:30 left in the game he pulled his seniors one by one to thunderous applause.

It would be easy to focus solely on Asia Durr’s career night, and you wouldn’t be mistaken in doing so. But what stands out about this championship-level performance is the team dynamic. 23 assists from seven players; 12 assists from Jazmine Jones and Dana Evans combined. A defensive effort that held an NC State team averaging 72.2 points and 44.8% shooting to 62 points on 38% from the field. A rebounding effort that reduced the Wolfpack’s best in the conference +10 rebound margin to a mere +1. Limiting their own turnovers to five while forcing NC State to give up the ball 14 times (with nine steals) producing 22 points. As February turns into March (literally as I type), this is the kind of performance you expect to see from a team ready to make a deep run.

Offensively, 47 points on 62% from the field with a record-setting 11 for 17 from three-point range is the stat line you are obligated to put in the lede. Asia Durr put on a clinic. For most of the game she was outscoring NC State, as in she had more points than the entire opposing team. To be true, the Cardinals’ defense was fierce but the Wolfpack offense wasn’t exactly stymied. Most of their leading scorers matched their averages. But imagine a spotlight next to the Sun. Outshone would be an understatement.

There was a moment, however, during the second quarter when it felt like all the life would be sucked out of the Cardinals’ onslaught. The Wolfpack’s Kiara Leslie was in transition as NC State attempted to extend a small run while the Cardinals entered their obligatory cold-shooting period. Bionca Dunham bodied up and was called for the foul. As Dunham walked past Leslie after the whistle was blown, words were exchanged. Words turned to contact, albeit light. A referee confab ensued, and as time ticked away the assembled became restless. For a time it felt as if the officials would suck the energy out of an ascendant Louisville team, but the crowd did what they could to relight the fire. The Redbird himself (sans body paint) got the C-A-R-D-S cheer going.

Eventually, an off-setting double-unsportsmanlike foul would be assessed. And what could have been a deflating moment turned into the spark the Cardinals needed. Dana Evans did as Dana Evans does. Off the bench she contributed 15 points, 6 assists, and 3 steals while tossing in 3 for 7 from beyond the arc. Lindsey Duvall complemented Evans in the same way Evans complements Durr and Carter, and would finish with six points.

On Senior Night, Sam Fuehring exploited the opportunities created by Durr’s perimeter shooting exhibition. 12 points and 12 rebounds to notch her fifth double-double of the season. Of special note? Fuehring’s five kick-out assists on an unselfish night when every Cardinal was looking out for one another. As for Arica Carter, her stat line might not seem impressive to the uninitiated. Banged up early, she’d spend much of the night on the bench. And in any case, as Asia Durr’s point total increased the Cardinal strategy naturally shifted to feeding her the rock at every possible opportunity. That’s unselfish. That’s a team. And that team effort dropped 92 points and a 30 point loss on an NC State team that’s averaging a +5.6 point margin of victory in ACC play.

All eyes now turn to the final regular season match-up with a Pitt team that’s 2 and 13 in conference play. Barring absolute disaster, the Cardinals will finish 14 and 2 in the ACC. Notre Dame has a date with Virginia for which they’ll be the heavy favorite. If all goes as expected, both the Cardinals and the Irish will finish 14 and 2. And thanks to that night back in January in South bend, Notre Dame owns the tiebreaker and would garner the #1 seed. If the script plays out as written, we could expect a rematch of the red and the green in Greensboro a week from Sunday.

Senior Night. A career night. A team night. More nights like this in March and April and you might see the banner hoisted.