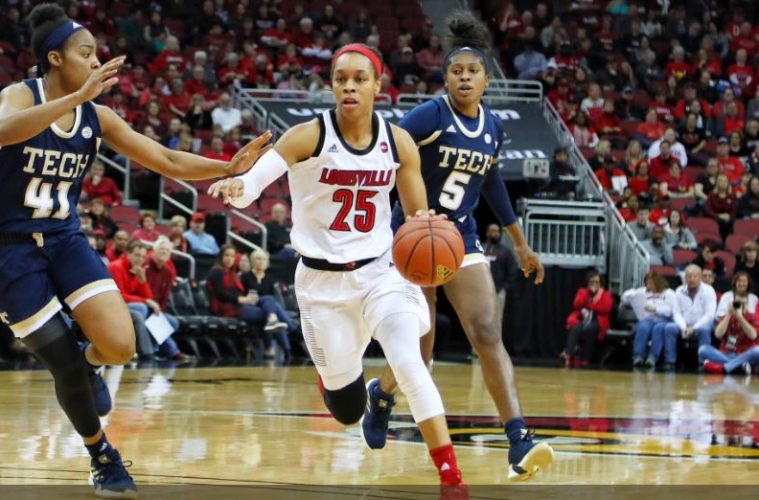 Cards Ramble On To Wreck Tech In 61-44 Victory

Jeff Walz has a clear philosophy in that the best offense is a good offense. The Cards would start the game 4-4 from the field, and would not allow Tech a point until four minutes into the first quarter. But what the Wreck lack in age, they make up for in size. That size advantage was quite apparent early on, as Tech coach MaChelle Joseph opted to pack the paint with height. While the rotation of Fuehring, Jones, and Shook would hold their own, it just wasn’t enough and Tech would finish the first half with a 21-14 rebounding tally on their way to a 46-32  advantage for the afternoon.

To this, Jeff Walz would say, “You go big? I’ll go small.” Mykasa Robinson and Dana Evans would join Asia Durr and Arica Carter, leaving a rotation of Sam Fuehring and Kylee Shook to patrol the middle. The Cardinals proceeded to pick apart the Tech zone while capitalizing on the Wreck’s tendency to turn the ball over and finish the first half with 20 points off Tech’s 13 turnovers. Robinson was coming off a strong performance in the loss to Notre Dame, contributing six points in the fourth quarter at South Bend. Post-game, Walz had specifically called out her dedication in practice and an expectation for added minutes going forward.

But it was senior Asia Durr who would take the ball to the basket throughout the afternoon. Durr was coming off a 29 point performance in South Bend, and picked up right where she left off on her way to 21 points to lead all scorers. The only real blemish for the Cardinal offense was a cold third quarter that featured a 4:00 scoring drought. Louisville would go from a 24 point first quarter to a 12 point second, only to be outscored 8 to 10 in the third. Fortunately, Tech only managed to shoot 26% from the field and presented no real threat even during the Cardinals scoring woes.

As the Cardinals looked to reignite their offense, they turned to what had been a relatively dry well throughout the first three quarters. 6’4” and 6’5” Tech starters Cubaj and Dixon would combine with 6’4” Diouf off the bench for 23 rebounds and 10 points. Throughout the first half it looked as if the paint was a no-go zone, and Walz obliged with his smaller, perimeter shooting lineup. Yet it was Sam Fuehring who fought tenaciously throughout the game and found the payoff in 13 points and a career-high 14 rebounds for her second double-double this season. Kylee Shook would contribute 8 points and 3 rebounds off the bench as the Cards would finish the game outscoring Tech in the paint 26-22.

Despite their size, Georgia Tech’s youth was obvious throughout the afternoon. The Wreck field a roster with only one senior and two juniors. Freshman and 2017 McDonald’s All-American Elizabeth Balogun showed a dangerous level of talent as she led Tech with 13 points and 10 rebounds. But the visitors would turn the ball over 23 times, and the Cardinals would capitalize by converting those turnovers into 23 of their 61 points.

In the end, the Cardinals outshot and outplayed the young Tech team. But screaming like a klaxon is 14 point rebounding margin in favor of Tech. A good number of the questions at Jeff Walz’s post-game presser revolved around that rebounding gap, to which he responded, “It’s nice to be 14-1 and figuring how to rebound. That’s a lot better than 1-14.” Despite the stellar play of Fuehring, the Cardinals often face a distinct size disadvantage. Prior to the Notre Dame game, Walz was asked about recruiting for height. He succinctly declared that he was more interested in recruiting talent as opposed to height.

And yet some solution will have to be found if the Cardinals hope to maintain their success against ACC opponents. Per Walz, it will be a team effort requiring contributions from guards as well as forwards. Whatever the spark might be, let’s hope it’s found quickly. But one thing’s for sure.

The Cards have proven that rebounding from a tough loss presents no concerns.