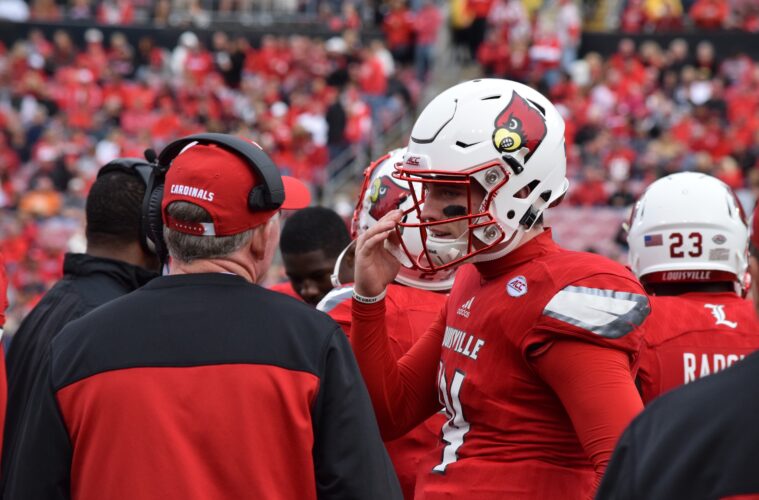 COACH PETRINO: We’re coming off a good win against Boston College where our defense had a great game and did a really nice job dominating their performance. We had eight sacks, put a lot of pressure on their offense.  Offensively we’re still inconsistent, not doing things we want to do on a consistent basis. But we have seen improvement in the last three weeks, so we’re continuing to work at that. We’re excited to go to Wake Forest on Friday night.

Q. Coach, we talked a few weeks ago about the improvement you wanted to see in quarterback Lamar Jackson’s footwork. What have you seen, in your opinion, in that area?

COACH PETRINO: He’s definitely making improvement. We’ve seen him be able to get set and be on time with the ball. He probably had a better game against Florida State than he did last week against Boston College, although he made some critical plays when we really needed to get first downs and flip the field. He did a good job with being on time with the ball that allowed us to do that versus very tight coverage. He continues to get better. We’re excited about the things that he does not only throwing the ball, but running it. We just need to get more consistent with all 11 guys on the field so that we can drive the ball and score touchdowns.

COACH PETRINO: Yeah, they were very good on defense. Very dominant defensive front. Their linebackers are really smart. You could see them making adjustments as the game was going on, getting an understanding of what we were doing. I thought we came out and executed well. In the first two quarters, we left a couple points out there by getting negative plays, not being able to stay in position, threw an interception in the endzone. But we were able to drive the ball. We were able to flip the field. They are a great defense. Like I said, I think we do continue to get better on offense.

Q. I don’t know when the last time I covered a game where four freshmen were expected to start at tackle. How is it working out with you and your freshmen? Do you agree that the offensive line may be the hardest place for a freshman to break in?

COACH PETRINO: I do believe that’s thehardest place to play as a true freshman. I think the ability to block people as you’re backing up, some of the best players in our conference are playing defensive end, they’re great pass-rushers. It makes their job very difficult. Our guys continue to improve. Geron (Christian) has done a nice job all year long of coming in, being a quick learner, a very good technician, which gives him an opportunity to do a good job. Kenny (Thomas) has come on. He was going to start the first game of the year. He ended up getting injured on Wednesday before that game. It took him a little bit of time to get back to where he was. But he’s going to be a great player. He’s big and physical, continues to improve.

Q. Bobby, is there any update on the status of Jaire Alexander or Jaylen Smith today?

COACH PETRINO: Jaire has not practiced. He’ll be out for the game. Jaylen practiced yesterday, looked pretty good in practice. He’s still questionable.

Q. Wake Forest are probably expected to play two different quarterbacks. Can you compare and contrast those two guys, how you will prepare for that?

COACH PETRINO: Well, we know John Wolford very well. I recruited him out of high school. Known about him since he was a freshman in high school. He’s got a very, very quick release. He does a good job executing their offense, what they’re asking him to do. The Hinton kid is young and athletic and can really run with the ball. He had a long touchdown run the other day against North Carolina State. So we have to be prepared for both of them. They’re a little bit different style when one’s in the game than the other.

Q. What are your thoughts on playing Matt Colburn given the history you have recruiting him and what you’ve seen on film?

COACH PETRINO: We’re happy for Matt, that he’s got a great school to play for. He’s done a nice job for them. He’s been in there carrying the ball, making plays for them. We’ve got to do a good job of really shutting him down.

Q. Wake Forest was a handful for you last year. What do you recall about that game? Can anything from that game help you in preparing for them this week?

COACH PETRINO: Yeah, they play very good defense. They’re very fast. It’s a lot of the same players. They do a good job executing their package. We had trouble finishing drives. We were able to move the ball at times against them, but we had trouble finishing drives and getting the ball in the end zone. We were able to do a good job in the fourth quarter of running the football and finding a way to win. But it was certainly a battle.

Q. Do they look much different to you on either side of the ball from what you’ve seen on tape so far this year?

COACH PETRINO: I think they’ve improved a lot on offense. They’re a better offensive team right now than they were last year at that time. They’re kind of like us. Young and improving. We’ve got to be ready for the challenge and make sure we do a good job shutting down their run, trying to be able to put some pressure on their thrower. Then defensively they’ve struggled the last couple weeks, but up to that point, they’ve played great defense.

Q. If Jaire can’t go, will (Cornelius) Sturghill field the punts? What did you think of what he did last week?

COACH PETRINO: He did a good job catching the ball. He’s done a nice job in practice catching and running with it. He didn’t get any opportunities, except for once, where he could take off and go.  He’s very, very athletic. He’s fast. He was a receiver a year ago for us. We moved him over to corner. He’s used to carrying the ball and running with it.