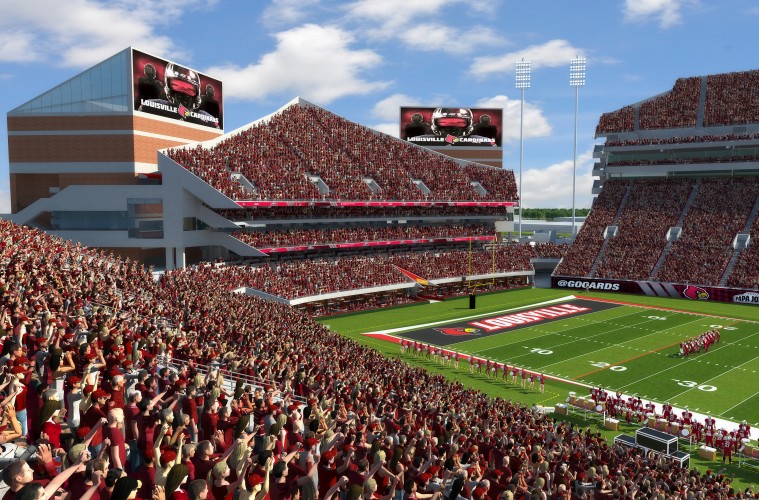 All of the field level suites and premium boxes in the new end zone structure have been sold out as UofL gears toward beginning the expansion project in November at the completion of this season.  Over half of the club seats have also been sold as fans have responded to the campaign which was launched just eight months ago on Feb. 4.  UofL announced plans to expand the stadium on Aug. 28, 2015.

The approximately $55-million project, to be financed through ticket sales, donations sponsorships and other possible sources, will add 10,000 chairback seats to increase the stadium capacity to approximately 65,000 and dramatically enhance the football complex while creating a unique look in the end zone.

Opportunities remain available to participate in the expansion.  Information may be obtained by visiting www.ComingFullCircle.com or by contacting the Cardinal Athletic Fund at(502) 852-8921.

The expansion will improve the experiences of both fans and the Cardinals’ players.  UofL’s football student-athletes will have access to state-of-the-art facilities, while fans will have opportunities to be closer to the action with new vantage points, expanded club areas, and an improved game-day atmosphere.

Included in the expansion are 1,000 club seats, 70 premium boxes, and 12 exclusive field level suites. The premium seats will have access to two premier gathering areas: the Pepsi Club, which will provide elevated viewing access to the field; and another premium low-level club, which will be similar to AT&T Stadium, the home of the Dallas Cowboys. This club will provide a unique fan perspective that will allow fans the opportunity to be close to the action and be a part of the excitement as the players take the field.

For the football players, the football complex will undergo dramatic changes to the training areas and improve the overall student-athlete experience. An additional 100,000 square feet of space will allow the team’s weight room and conditioning center to double in size, creating space for team workouts, conditioning, and an enhanced athletic training space equipped with a state-of-the-art hydrotherapy area.

A luxurious and spacious players’ lounge, improvements for coaches’ offices and the team locker room, and expansive theatre-style meeting areas also will be among the major improvements dedicated for student-athlete development.