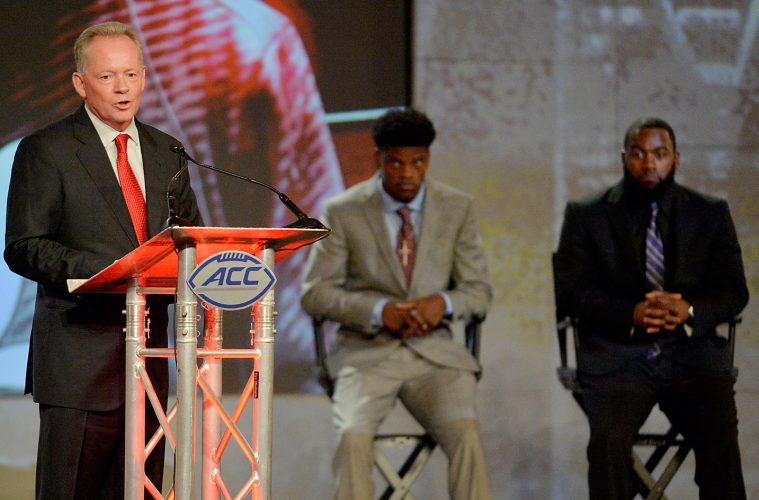 The University of Louisville football team has been picked to finish third in the Atlantic Coast Conference’s Atlantic Division, according to a poll of 191 media members in attendance at last week’s 2016 ACC Football Kickoff in Charlotte, N.C.

Louisville, which received one first-place vote in the preseason poll as well as one ACC Championship vote, returns 18 starters from last year’s team that won eight of its final 10 games. The Cardinals capped the season at 8-5, going 5-3 in league play, following a 27-21 victory over Texas A&M in the Music City Bowl in Nashville, Tenn.

The Cardinals are entering their seventh season under the direction of head coach Bobby Petrino, who has led the program to a 58-18 record and bowl appearances each season. In his 11 seasons as a collegiate head coach, Petrino’s 100-39 record (.719 winning percentage), the 11th-best winning percentage among active coaches at the Division I ranks.

Offensively, Louisville returns one of the most electrifying players in the country in Maxwell Award Watch List member Lamar Jackson, who earned a pair of votes for the preseason ACC Player of the Year award. Jackson, a sophomore, captured Music City Bowl MVP honors after rushing for a game-record 226 yards and throwing for 250. He is only the third quarterback in postseason history to rush and pass for over 200 yards in a game. Jackson completed the year with a school-record 960 yards and 11 scores on the ground and 1,840 yards and 12 touchdowns through the air.

Harvey-Clemons, a starter in all 13 games, established himself as one of the nation’s top safeties following his junior season where he totaled a career-high 88 tackles and was second on the team with three interceptions.

Louisville opens the year at home against Charlotte on Sept. 1 in Papa John’s Cardinal Stadium. Kickoff on the ACC Regional Sports Network is set for 7 p.m. The Cardinals’ home slate also includes contests against Florida State and Kentucky.

The 2016 ACC Dr. Pepper Football Championship is being held on Dec. 3 at Charlotte’s Bank of America Stadium