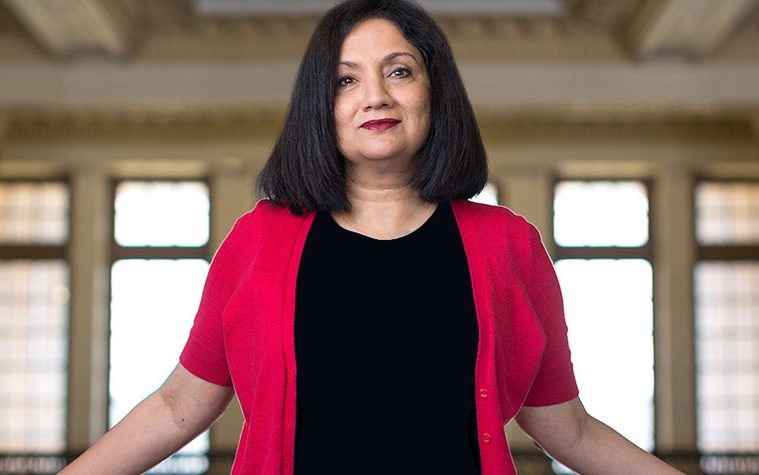 A University of Kansas provost with extensive academic and business experience has been selected as the next president at the University of Louisville.

Neeli Bendapudi, Ph.D., provost and executive vice chancellor at the University of Kansas, was selected after a months-long search that drew more than 50 candidates from across the nation. The UofL Board of Trustees approved her appointment at a special meeting Tuesday, April 3. She is expected to start at UofL on May 15.

“We conducted a thorough search for a dynamic, proven leader who would help reenergize the university and serve as a strong, visible advocate not only for UofL and our students, faculty, staff and alumni, but for the City of Louisville and for higher education throughout the Commonwealth of Kentucky,” said J. David Grissom, chairman of the UofL Board of Trustees. “We found that person in Dr. Bendapudi. Her academic credentials are impressive, her leadership skills are outstanding, and her enthusiasm is both undeniable and contagious.”

“I am deeply honored and truly excited to join the Cardinal family,” said Bendapudi. “I have seen the great spirit and graciousness of this community on bold display throughout the search process, and Venkat and I are truly excited to call Louisville home. I am looking forward to working with our students, staff, faculty, alumni and community — as one team — to deliver on our promise of excellent higher education. I know we have a bright future ahead at UofL.”

Bendapudi has held her current position since May 2016. She previously had served as the Henry D. Price Dean of the School of Business at Kansas since 2011. Prior to her tenure at KU, she had taught at The Ohio State University’s Fisher College of Business, where she had risen from assistant professor in 1996 to full professor in 2008. She also was an assistant professor of marketing at Texas A&M University.

A member of the American Association of Universities, the University of Kansas has an enrollment of more than 28,000 students and an operating budget of almost $1.3 billion. As KU’s provost, she oversees more than 11,000 employees, 12 schools and colleges and a budget of about $698 million.

An outstanding instructor, she has received many department, college, university and national teaching awards, including the Academy of Marketing Science Outstanding Marketing Teacher Award.

Bendapudi also has significant business experience, including service as executive vice president and chief customer officer for Huntington National Bank in Columbus, Ohio. She has consulted with many national and international companies, including Cardinal Health, Cessna, Cintas, Nationwide Insurance, Procter & Gamble and Wendy’s, among others.

A frequent speaker on marketing with a concentration on consumer behavior in service contexts, she has appeared on CNBC and NPR and has been featured in media outlets including The New York Times.

Bendapudi, 54, is married to Venkat Bendapudi, senior lecturer in KU’s School of Business. Their daughter, Sirisha, and son-in-law, Kyle Ladd, live in Chicago.