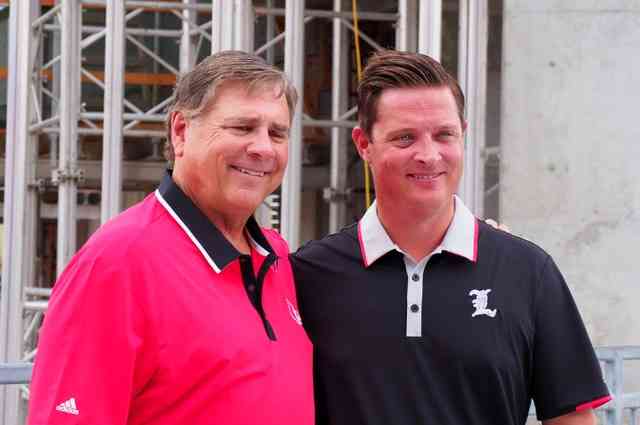 University of Louisville Athletics and adidas have extended their partnership for 10 years through 2027-28, positioning the Cardinals among the top five nationally in footwear and apparel rights among all brands.

A partner with adidas since 1998, the new agreement replaces the final year of the current deal, which was to run through 2019. The landmark deal places the Cardinals as the top university outfitted by adidas. The Portland, Ore., based company will supply footwear, apparel, accessories and marketing support for all 23 of the university’s intercollegiate athletic programs. Beyond simply wearing the three-striped logo, UofL and adidas will develop and define the most unique and innovative initiatives that are not specifically outlined in the agreement.

“When we began our relationship with adidas nearly 20 years ago, we weren’t in the same shape we are now,” said Tom Jurich, UofL Vice President and Director of Athletics. “adidas has stood arm and arm with us through adversity and success. The biggest winners in our cooperative partnership have clearly been our student-athletes, who are at the focus of all that we do. We are thrilled to be partnered with an enterprise who shares our passion for innovation, pioneering efforts, striving for excellence and simply doing things differently.”

With its significant commitment, adidas will continue its cornerstone status in Papa John’s Cardinal Stadium. adidas will be prominently displayed in the current expansion, which will be completed in 2018, with the adidas Three Stripe Zone and branding in the tunnel in which the team runs out onto the field, placing the brand at the intersection of fan and athlete. Marketing activation, including extensive collaborative marketing efforts, creative design and co-branded marketing initiatives are all a part of the agreement.

“Our new partnership with Louisville is one of our largest ever investments in sport in America,” said Mark King, adidas North America president. “When you think about college sports in America, you think Louisville. The athletic program the Cardinals have created is remarkable. These young athletes are impressive competitors in every sport. Louisville has been an important partner of ours for nearly 20 years, and we see tremendous value in our new partnership as we continue to shape the future of sports together.”

Continuing is the UofL adidas Internship Program, which provides scholarship assistance for over 20 UofL students who work with athletic department leaders. The program has been in place for three years and has provided invaluable opportunities for practical learning experiences through the exclusive nine-month program for full time UofL students seeking to develop knowledge, skills and abilities in athletic administration. The internships are capped off with a trip to meet adidas executives in Portland.

The Cardinals will also continue to be outfitted with among the most innovative and creative uniforms. Multiple adidas uniforms for the football team allow for varying combinations with different helmets, while UofL’s baseball and men’s and women’s basketball teams will feature numerous uniforms, including vintage designs and special postseason attire.

Throughout the agreement, adidas will continue to provide extensive investments in the Cardinals’ athletic programs, including support for national champion spirit squads and co-branding opportunities nationally and incentive-based bonuses for football and men’s and women’s basketball advancement.

Cardinal coaches are also excited about the extension of Louisville’s partnership with adidas.

“adidas has been a great partner and asset to our university,” said Rick Pitino, UofL men’s basketball coach. “We deeply appreciate their loyalty and their efforts to make us a standard bearer for their brand. Our uniforms and footwear have been tailor-made to regularly bring excellence to players, our fans and the national audience. We look forward to continuing as a top-five program with adidas here in the United States.”

“We are thrilled to continue and expand our partnership with adidas,” said Sandy Pearsall, UofL softball coach. “Our student-athletes train hard to compete at the highest level and adidas’ innovative footwear and apparel have helped with all aspects of our program. Every day we proudly wear our uniforms, practice gear and shoes to represent the University of Louisville and adidas helps us do that in the best way possible.”

“From the first day I arrived in Louisville 11 years ago, I was immediately impressed by the attention adidas gave to baseball and to all of the Olympic sports,” said Dan McDonnell, UofL baseball coach. “They continue to outdo themselves each year with their innovation as well as cutting edge uniforms, cleats and athletic gear. Tom Jurich and our athletic department strive for our student-athletes to have the best experience possible at the University of Louisville and adidas has helped make that possible.”

Louisville fans across the nation will continue to be able to purchase adidas gear including sideline apparel, coaches’ polo shirts, hats, jerseys, performance apparel and outerwear at a wide variety of quality retailers including the Cardinal Authentic official team stores, as well as on the official athletics website, shop.GoCards.com.