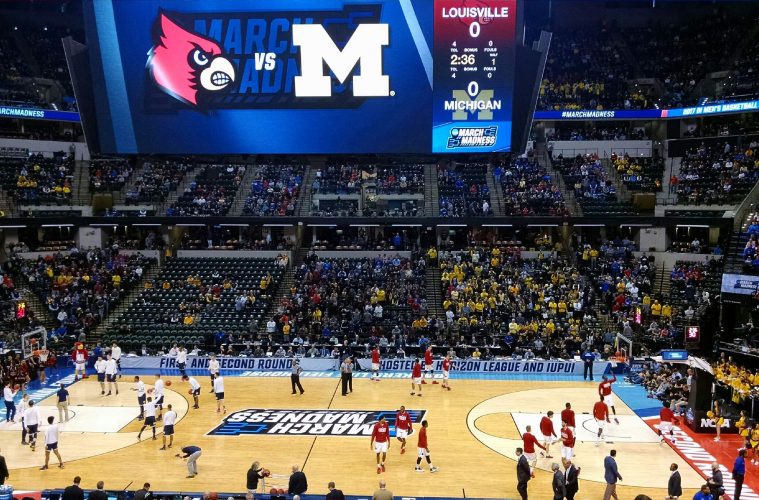 COACH PITINO: Obviously, the team is very disappointed we lost, but, as always, unless you win it all, it’s always going to be a disappointment. We played a good game, especially in the first half. We played terrific defense.

We’ve lost games this year not because of effort, because these guys have given me A-plus effort. We lose games because mentally we have a very difficult time focusing on what to do defensively. It cost us the game tonight by constantly giving them their right hand, which has to be taken away.

I was glad to see that Tony got a chance to play in the NCAA, get some experience. That’s why he came in as a fifth-year senior, and Mangok has been a joy to coach for the 11 years he’s been here.

Q. Mangok, maybe just talk, they got a lot done inside, but you guys were trying to get out and stop the 3. How tough a challenge is that to try and cover everything? They seem to do it all well.
MANGOK MATHIANG: Because they shoot the ball so well, the plan was to basically try to switch everything. And once they seen that they try to take advantage of our guards and the big fella, they did a good job of working on getting into the paint.

Like coach said, we did a poor job of giving them the strong hand, which was the goal, to basically eliminate that. We didn’t do such a good job on that.

Q. Rick, did Moritz surprise you with being able to get that much done, even though, obviously, you guys were focusing elsewhere on defense?
COACH PITINO: We made some bad switches by not communicating. Mangok was trying to tell the guards to get over it so we didn’t have to switch. We wanted to switch going toward the perimeter, not going to the basket. We made some poor switches.

Probably the weakness of our team this year has been our defense. Our offense in the last ten days or two weeks, we’ve gotten significantly better because we worked inside to out.

But our backcourt defense, getting over screens, has probably been the biggest weakness this year. We’ve got to improve in that area.

Q. Rick, you talk about the defense in the second half. Was that the difference in the game? Was it something Michigan was doing in the second half that might have been different?
COACH PITINO: They made some shots in crucial moments, but we played really good defense in the first half because we switched intelligently, and we took away the strong hand. You have to take away Michigan. They’re a dominant right-hand team, and we concentrated on taking away Walton because he’s been on such a run, the right hand. Then we gave him his right hand on a couple of crucial plays.

That’s what it comes down to, a couple of crucial plays. We made a couple of big mistakes. Mangok made one, fouling with three seconds to go, giving him the right hand in the elbow and Deng not challenging the shot on the layup when we did give them the right hand.

But really, as a coach, you can never complain when you give great effort. All year, it’s been very tough on the whole team to focus in mentally on the little things that make a great defensive team.

That being said, we played the toughest schedule in the nation, finished 25-9. Couldn’t be prouder of the guys. Going forward, we have to learn how important defense is because with the game on the line. We broke down defensively, not offensively, because we shot a good percentage in the game and did a lot of good things offensively.

Q. It may not be the correct time, so I apologize, but Mangok, if you can maybe look back a little bit at your time, I know Rick jokes about the 11 years at Louisville, but it has been a long run for you. Unfortunately, it comes to an end tonight.
MANGOK MATHIANG: I have no regrets in tonight’s game. Coach is being honest about focusing on key things towards the end of the game, and we did a poor job on that tonight. And it started off with me when it came up to three seconds left, poor foul, especially coming from a fifth-year senior and a leader as well.

Other than that, I feel like the team fought, played real hard. They gave their teammates and coach everything they had, but we just fell short.

Q. Tony, you found yourself in long stretch of the game against one of the hotter point guards in the country. What was it like to be part of this?
TONY HICKS: It was just a great experience. I couldn’t have asked for anything more. Just trying to make it tough on him. He was kind of the head of the team. Tried to make it tough. It wasn’t enough.