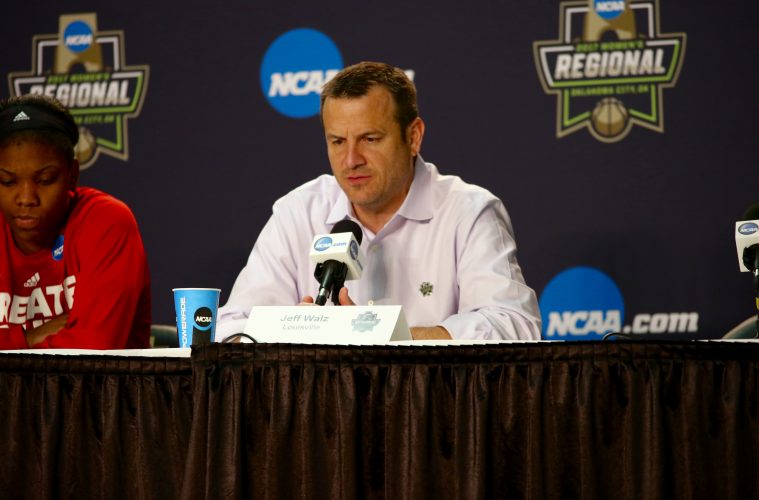 THE MODERATOR: We’re now joined by Louisville. Coach, your thoughts about tonight’s game.
COACH WALZ: Well, first off, I’d like to congratulate Baylor on a very well-played game, and thank everyone with the support staff, everyone involved with the NCAA.  It’s been a wonderful experience for not only myself but our entire program, these young women sitting next to me here, our support staff, everyone that’s been involved with it from the University of Louisville.  I just definitely would like to thank the NCAA.
Then on to the game.  They played well.  Unfortunately, we did not.  We did not put up a performance that even resembled anything that I had seen from our ballclub the last month.
You know, we knew coming into it that we were going to have to play very well and really do a lot of things in the post to try to give some post help.  Unfortunately, we just did not respond very well.
The first play of the game, we got them to take the shot that we wanted to take.  They miss it.  Then we don’t follow through with the box-out.  It turns into a layup. When you’re playing a team with the talent of Baylor, the depth of Baylor, you have to be able to finish out plays.  Unfortunately for us, we did not. I thought we actually took care of the ball decent.  But the problem is, you know, every time we turned it over, it led to a point.  It’s a staggering stat, when you look at it.  They have 21 points off our turnovers, and we only turned it over 12 times.  Every turnover led to a point, a basket.  It’s unacceptable.

We’ve been talking, if we’re going to turn the ball over, we need dead-ball turnovers, we need to throw it into the stands, hold onto it, but they can’t lead to baskets. They led to 21 points.
Unfortunately it’s definitely not the way we wanted to end this season, in this fashion.  I’m proud of the young women that I coach.  They’ve worked their tails off. They’ve had a great season.
We’re looking forward to getting back in the gym and start working for next year.
THE MODERATOR: Questions for our student-athletes or Coach.
Q. Asia, it seemed like in the beginning your shots weren’t really falling.  You started to get into a rhythm as the game went on.  The team overall didn’t really.  What do you think it was that was keeping you from getting started in the beginning? Was it the same thing that was hampering the entire team throughout the game?

ASIA DURR: Well, I think, starting off in the first quarter, I mean, I started off too hyped.  As the game went on, I calmed down.  We started to get a few stops here and there, but we didn’t shoot the ball too well.  We just tried to make a few runs.  They didn’t get enough stops, so…  That’s what really hurt us tonight.
Q. Coach, the second quarter was where you all made some adjustments to what Baylor was doing. You made a run to close the gap just before halftime.  Talk about that.

COACH WALZ: Well, we really didn’t make any adjustments.  We just actually followed through with the game plan.  We actually executed correctly and did the right things, which we struggled with.  We knew it coming into the game, that we had to be on point.  Then, like Asia said, we came up with some stops.  We had some great rotations.  Our effort was really good.
Went into halftime feeling good.  I really felt good about things.  I’m like, Hey, it’s a 12-point game, people. They had it at 18.  We cut it down to 12.  We got to get a stop, score, stop.  It led to a score, turnover, and-one, a 5-0 run.  It was like, Golly, you went from 12 to 17 in a hurry.
Q. Coach, how would you compare this Lady Bears team to the team you saw in 2013?  Do you think this team could potentially be better than that squad?

COACH WALZ: I think they’re deeper is what it is.  I don’t see anybody on the team that’s the caliber of Brittney Griner.  I’m not sure there’s going to be.  I think she’s a once-in-a-lifetime player to come through. Odyssey Sims was pretty darn good, too.  I think once you get into five, six, seven and eight, I think five, six, seven and eight on this year’s ballclub, you have to guard ’em all.  There’s only one or two kids that I thought on the roster, when they got into the game, we were going to try to make ’em shoot and score.  In ’13, I thought they had four or five of them that we were going to challenge.  It makes it much more difficult when they can put five on the floor that can score, four out of five most times can score.  I think that’s your difference, the fact that they’re just deeper.

Q. Myisha, did you feel like this game was at all comparable to any other losses you had this season?

MYISHA HINES-ALLEN: No, because this is our last game.  This is the last game for the seniors.  You’re one-and-done if you lost this game.  It hurts a lot because we knew we could have played a lot better, and we didn’t follow through with the game plan for the whole 40 minutes.  We didn’t come up with stops when we needed to.  You know, it just hurts a lot because we know we could have done a lot better than what we did.
Q. Jeff, you’ve had probably in your career a few of these undersized kids, like Nina Davis.  Seemed like today was the kind of game where her senior leadership and the things she did made a big difference.  Talk about how tough a kid like that is.

COACH WALZ: No, she played extremely well.  She plays hard.  She’s crafty.  She knows how to put the ball in the basket.  Then, you know, she fits what they’re doing.  She’s a very important piece to their puzzle.  Kalani Brown — I thought Beatrice played extremely well, Kalani played well.  They’re able to throw so many big kids at you, they’re big bodies, but they’re also talented.
I tell people all the time, they always used to tell us, You got to go get a big kid.  I’m real excited about Kylee Shook and Ciera Johnson, what they’re going to be able to turn into.  They’re efficient right now.  Kalani and Beatrice are very efficient.  They score around the basket, which then opens things up for Nina.  I thought she does a great job of taking advantage of that.  She did it tonight. 10-15 from the field…
Q. Coach, I know you said yesterday that you wanted to force Baylor to use players that they don’t normally use to score.  34 bench points tonight.  Seemed like they kind of did do that.  Is that what you envisioned?

COACH WALZ: No.  They really didn’t do that at all. The ones that we knew could score coming off the bench scored.  We had a few of ’em that were shooting the ball early that we wanted them to shoot, but we couldn’t get the rebound.  That just eliminates everything you’re trying to do.
You know, the ones that we were going to want to shoot really shot it.  But, unfortunately, did not shoot it enough.
THE MODERATOR: Congratulations on a great season.
COACH WALZ: Thank you, everybody.