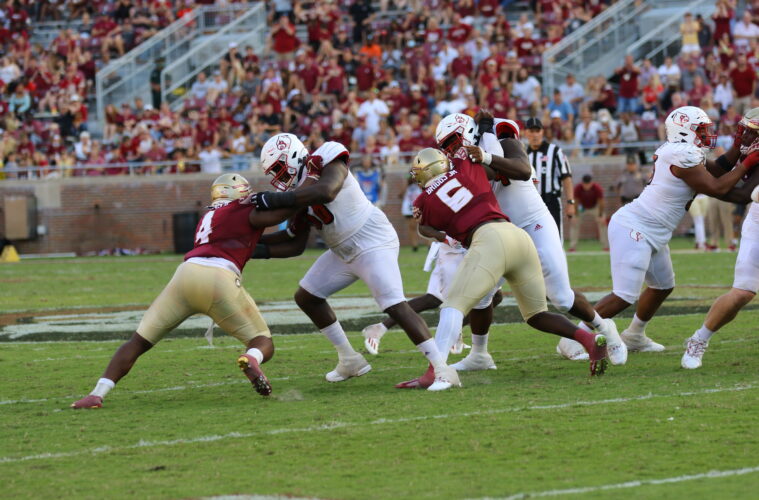 BOBBY PETRINO: It’s a good time for us to have a bye week. We’re working hard back on the practice field. We’ll work today and tomorrow again as well as yesterday and then give our players a little break over the weekend and come back on Sunday night and meet and practice again. But we need to get a few guys healthy. I think that’s one of the things that the bye week really helps us, and take a deep breath and get ready to go play a game a week from now.

Q. After the game on Saturday, Jawon said he wasn’t told that he was coming out of the game and actually found out when Jordan Travis was warming up and actually went in the game. Was there no communication about the change, and if so, is that a simple miscommunication, or is that standard to not inform the quarterback of a change?
BOBBY PETRINO: The way it worked is they said get Jordan up and get him warmed up and then had Coach Galloway tell him that we were going with Jordan. I think he saw Jordan get up first. Obviously that’s something that sometimes you communicate it, that hey, we’re making the changes, sometimes you’ve got to get up right away and get the backup quarterback warmed up.

Q. As a follow-up, you had said that Coach Galloway was the one that would go to the quarterback Puma Pass. Was that simply it got lost in translation that Galloway did not tell Puma Pass because he said he found out when Jordan Travis went in the game.
BOBBY PETRINO: Yeah, I don’t know exactly how that worked out. This is the first I’m hearing about it. But like I said, it’s always one of those things where you’ve got to get the back up and get him warmed up and ready to go, and then when it’s time you have to make a change, you make a change. That’s just how it worked out. Puma is our starting quarterback. We were working hard at trying to see if Jordan could come in and give us a spark. We were in a situation where we needed to score fast, we needed to get the ball down the field, and we were hoping that Jordan could give us that spark.

Q. I know you had the statement yesterday on Kemari. Is his status still unchanged, and do you expect him to play again maybe this season?
BOBBY PETRINO: No, he’s on suspension, and there’s not a whole lot I can say. It’s an ongoing investigation, but he’s been suspended from all activities.

Q. And then with a few extra days to sit on the game on Saturday, your thoughts? I know you had some uncertainty at quarterback. Your thoughts on what you want to work on most during the off week, I guess?
BOBBY PETRINO: Yeah, we’re working hard on our pass protection and our timing in the passing game. We’re working hard on trying to get the ball down the field more, trying to see if we can throw the ball deeper. But to do that, you have to have enough time, and that’s something that Boston College did a good job of — especially in the fourth quarter, of pressuring our quarterback. You know, it was 24-20 at the end of the third quarter. We had the ball on the 29-yard line going in to score, and we just didn’t execute. We missed a couple, we dropped a ball, we gave up a sack. I think at that point, it really hurt us.

Q. As you go into this bye week and look at the quarterback situation in particular, what sorts of things are you going to be looking at and evaluating as you move forward into the second half just to try to get a little bit more consistency going at that position?
BOBBY PETRINO: Yeah, I mean, you hit it right on the nail when you said consistency. That’s been the problem for us. There’s been times when we’ve looked good and moved the ball and got it in the end zone and executed the way you want to, but not on a consistent basis, and sometimes it’s been negative yardage and setbacks on 1st and 10. Sometimes it’s been not being able to convert on 3rd down. And it’s not just the quarterback. There’s a lot of issues at quarterback as far as being consistent and accuracy and on time. But it takes the other 10 guys around you to play well and do their job.

We’ve had really issues getting big plays and getting chunk plays. It’s hard to just drive the ball all the time. You have to get some big plays to be able to score a lot of points.

Q. Has that been a surprise to you, considering who you had coming back at receiver and just the potential that you saw in Puma?
BOBBY PETRINO: Yeah, it’s been a surprise. You know, I would have never thought we were going to be like this on offense. I didn’t see it coming. I thought we executed in camp. It’s one of those things that we haven’t been able to get it done on a consistent basis.

Q. I understand with targeting and the safety issue, but I’m seeing some defenders that are being thrown out of games and they have no intent of targeting, it’s just that the ball carrier is changing their angle and they can’t change fast enough. Do you think the NCAA needs to revisit this and look at time and space at the end of the season?
BOBBY PETRINO: Yeah, you know, I think that the safety issue is something that’s good. It’s helped the game of football. I think we’ve gotten rid of a lot of the bad plays over the middle and the high, heavy hits to quarterbacks. I think it’s really helped football. The hardest play is when the receiver is coming down with a catch or runner lowers his pads as the defender is trying to hit him in the contact zone. You’re trying to hit between the knee and the chest and all of a sudden the offensive player goes down or gets lower or is on his way down. And like you said, it’s unintentional.

I think they will revisit it, and we tried to get them to revisit it last year about there’s certain plays that can be a targeting 15-yard penalty, but you’re not removed from the game. They didn’t do it, but hopefully they will here coming up because I think there are some plays that obviously there’s no intent.