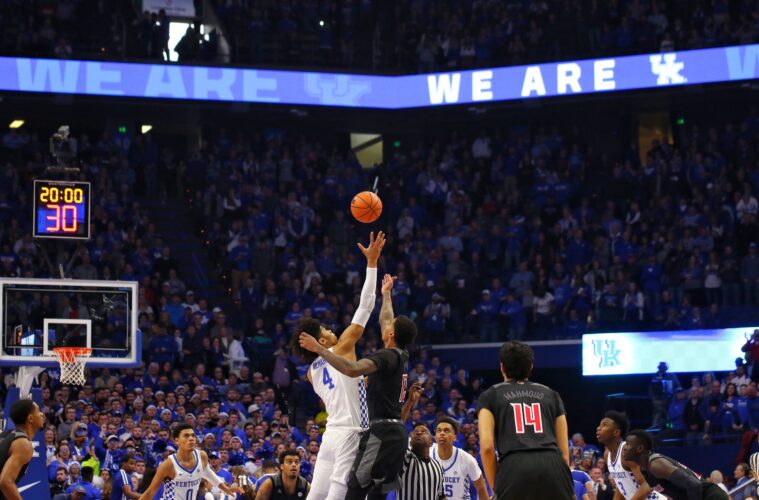 The Cards will host the Cats on Saturday at the KFC Yum! Center. Louisville routinely goes 10 deep, Kentucky with the loss of Quade Green has shortened up to a mostly 8-man rotation (sometimes they do play Jemarl Baker).

The Cards have an advantage at point guard IF Christen Cunningham is able to play.  Christen hit his head in practice leading up to the Robert Morris game this past Friday and has been in concussion protocol.  Ashton Hagans did have a standout performance vs the North Carolina Tar Heels with 8 steals on Saturday so he to be respected.  Hagans has yet to score over double digits this year, but has had several 4+ assists games, and his UNC game was also note worthy for his 5 turnovers.  Christen Cunningham has been consistent all year for the Cards and is UofL’s steadying force.

Tyler Herro does have a clear size advantage over Darius Perry & Ryan McMahon who will likely tag team guarding Herro at times.  It’s a better size match-up for the Cards when UK uses Immanuel Quickley with Hagans in the back court, but Herro is far from a perfect player despite 5 consecutive double digit scoring games. Herro has shown to shoot at a low percentage and can sometimes make up for that with his rebounding and ability to get steals (two 5 steal games so far).   Darius Perry is more efficient than Herro, but hasn’t shown that he is as explosive in 2019.  Ryan McMahon may stretch the floor some and mitigate Herro’s size advantage offensively.  I’d say this match-up is a give and take.  But when you add in Khwan Fore to the mix it really notches things up.  Louisville has a depth advantage in the back court and has different parts for different scenarios.  The Cards can with stand a mild amount of early foul trouble here, while UK can not.  Still Herro is the best player in this match-up and Quickley is a really nice piece in the UK backcourt.

At the 3 spot UofL has options.  Kentucky has Keldon Johnson.  Keldon Johnson is a star.  He’s an mid to upper first rounder depending on which mock draft is referenced.  Johnson will play a lot of minutes and he has shown a remarkable ability to get to the foul line (except vs VMI & Seton Hall where he registered 0 FTAs). Keldon has scored 20+ on four separate occasions this year.  Dwayne Sutton is Louisville’s bulldog.  He’s athletic, effective and emotional.  He’s also from Louisville  We’ve seen local kids do great things in this rivalry and we’ve also seen them implode.  This will be Sutton’s first time in an expanded role in this rivalry (he played 5 minutes vs. UK last year).  VJ King is a former McDonald’s All-American, but he has been struggling to find his groove since his arrival at UofL.  It might be within him to put together an incredible performance…… and it might not be.  But for now we’ll have to go on what we know and we know that Keldon Johnson is an advantage for UK.  Will Dwayne Sutton’s defense be able to keep Keldon from exploding while also keeping him off the foul line?  Can Dwayne continue his hot streak offensively (three straight 14+ point games).  Sutton is a better rebounder and he’ll need to be on Saturday in order to make up the difference that UofL gives up vs. Tyler Herro at the 2 spot.

Jordan Nwora can also match-up vs. Keldon Johnson, but I’ll get to him in the PF section.

Because Louisville plays 4 out, 1 in these position match-ups get a little tricky.  So that’s why Jordan Nwora finds himself here.  He’s another 3 man for Louisville, but he’s also rebounding at an outstanding rate.  Nwora is a rebound short vs. Lipscomb from 4 straight double doubles.  Nwora is shooting 35 of 63 over the last 5 games and is easily Louisville’s best offensive option as the only Cardinal who averages double digits scoring.  PJ Washington is a rebounding maniac as well, but has been up and down in his scoring production.  Washington was outstanding vs. Seton Hall in the OT loss with 29 points on 8-15 shooting and grounding 12 rebounds with 4 assists.

Nwora is much more consistent (who thought we would ever say that) than PJ Washington, but Washington has a size advantage and is a better rebounder than Jordan.  UofL will also turn to Akoy Agau and Malik Williams in this spot, though those guys are typically reserved to just the 5 spot.  UK does use EJ Montgomery here and if Calipari does go with that match-up Nwora has an advantage offensively but will need to make adjustments defensively.

Reid Travis is the veteran for UK.  The grad transfer from Stanford is efficient and he’s been effective against high level competition.  9 double digit scoring games in 2018-19, he’s 2x 1st team All-Pac 12 and was a McDonald’s All-American.  Steven Enoch is bigger than Travis but Enoch has been spotty with most of his standout games coming against lesser competition.  Enoch seems ‘close’ to breaking out, but hasn’t done so yet.  Reid Travis is a known commodity and clearly the Cats have an advantage with the starters.

Malik Williams has been playing with increasing confidence and could be a huge factor in this game if he continues to bring great energy.  Williams was the best big for the Cards when trying to match-up with Juwan Morgan of Indiana (similar player to Reid Travis) so it stands to reason that Williams will get a great deal of run here.  Kentucky’s Nick Richards has seen his role diminish from a year ago, but packs a considerable punch down low with his size.  Akoy Agau is a depth piece for the Cards that can do some dirty work down low and is an emotional leader for Louisville.

Here are the numbers: