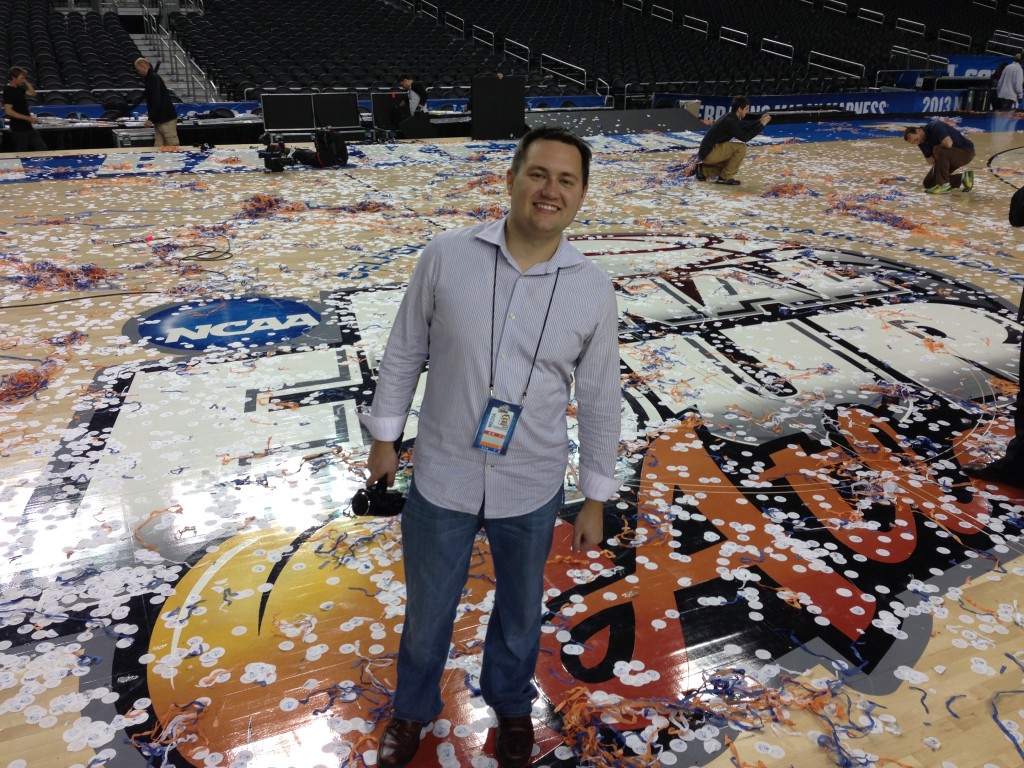 Reflections of a Season & National Championship

If someone had told me at the start of the 2012-13 season that the Louisville Cardinals would win the Sugar Bowl & the Men’s Basketball National Championship I would have made arrangements to travel to as many events as I possibly could.  Lucky for me, I did that anyway.  Since August 2012 I have personally attended 65 University of Louisville athletic contests, the Cardinals’ record during those events was 64-1  The lone loss was Louisville v. UConn Football, where the Cards lost in Overtime and Quarterback Teddy Bridgewater broke his wrist.  The Cards’ record with me in attendance is uncanny, but it has nothing to do with me.  If anything it just speaks to the level of success that is happening on Floyd Street during the 2012-13 season.  But there have been some weird quirks, several come from behind victories & overtimes have constructed some improbable finishes that when thinking back, actually begin to make me wonder if some magic isn’t truly at work.

For those 65 events I haven’t gotten on a single plane. I’ve driven 11,805 miles specifically for Cardinal Athletics this season. All of that travel hasn’t come without some really great stories; I’ve thrown beads off a New Orleans balcony with Chris Leak, I made Kate Upton laugh in the Georgia Dome, and picked up confetti off the mid-field logo of the Sugar Bowl and the National Championship. But it was all for UofL and our fans.  I’ve been to press conferences, squeezed into locker room interview sessions, and probably ruined a perfectly good computer.  I knew this season was going to be special, and for all of the miles, logistics, late nights, and sometimes total exhaustion it has been completely worth it.

A week ago today the University of Louisville won the National Championship.  Around 11:30 p.m. tonight, approximately around the same time when the title game game went final six nights ago I’m going to be drinking some bourbon and remembering.  Where did this all start? Many of us were born this way, I never had a choice.  My first Cardinal game ever was February 28, 1982, I was 80 days old.  Louisville, of course, won that day against a Hank Raymonds led Marquette team 80-68. Many may question bringing an infant to a basketball game and sitting 3 rows from the Louisville bench, but I think for my parents it was just to get me an early start as a Cardinal.

As a child, I was able to stay up past my bedtime ONLY to watch Louisville Basketball or Football.  I had an old Black & White TV with rabbit ears from my grandfather and on game nights I stayed close to that TV constantly adjusting the antenna as the reception changed.  Downstairs I could hear my parents & their friends watching the game.  As I got older I joined them, Summer would become Fall, Fall would turn to Winter, and Winter came to Spring, Louisville athletics was always there.

I don’t remember Louisville’s 1986 title.  Being 4 years old at the time my conscious memory had not yet formed, I’m sure I was there with my mom & dad on March 31, 1986. I was probably banging a pot & pan given to me by my mother & father.  I envision my 4-year old self going to “town” making reckless noise and having absolutely no understanding of why I was being given permission to do something way out of the ordinary.  Who knew it would be this long?  Who knew that Denny Crum’s reign over College Basketball had reached its final peak that night?

I think about all the late nights of early season Tournaments and watching games at midnight (or later) when the Cards would play in Hawai’i or Alaska.  All of the games I’ve been to at Freedom Hall arriving without tickets and finding them out front. Somehow I ended up in the stands on December 20, 2001 against Tennessee with upper level endzone seats, separated with from my dad and our family friend John Thomas, and when Reece Gaines hit his final 3-pointer Freedom Hall was the loudest I’ve ever heard it. Somehow that sound and excitement transported my body to the lower level.  To this day I have no idea how I left my seat or how I ended up down in the lower arena but I high-fived Card fans out through the tunnel and into the Concourse.

A few years later, Freedom Hall would host its final Louisville Cardinal game and the noise that I once thought would never be be louder, suddenly was. The Cards annihilated the #1 Syracuse Orange in the final game of the legendary basketball venue. It would be the final chapter of one era of Cardinal Basketball, and usher in the start of another at the sparkling new KFC Yum! Center. Still a championship evaded.

We watched the Iraq invasion in 2003 at the Birmingham-Jefferson Convention Center between games of the NCAA Tournament.  In 2004 the Cards were eliminated by Thad Matta’s Xavier and 32 days later my good friend Matt French died in an auto accident.  I watched the 2005 Regional Final in Albuquerque at Matt’s parents house. The Cards didn’t start making their comeback against West Virginia until we moved Matt’s stuffed Cardinal Bird in front of the television. Magic. The next day I took a copy of the Courier-Journal to Matt’s grave, his excitement for Louisville’s 1st Final Four since 1986 would have been through the roof and death wasn’t going to stop me from sharing it with him. Many Spring Breaks ago our families decided on a curious destination……ATLANTA. Matt & I walked the same Peachtree Street that week as I did during this Final Four, the same Peachtree stretch of pavement that I celebrated on early Tuesday morning flooded with Card fans.. The significance of place & memory is not lost on me, before and after the game it was all I could think about.  I’d be lying if the anxiety of the moment didn’t get to me, my heart pounded, my eyes swelled, beating Michigan was more than just a game.

Coming out of the Georgia Dome Tuesday morning a genuine sense of euphoria carried me past the exhaustion of a season.  The Louisville Cardinals had won the National Championship. In Atlanta, Card fans were out in force. The bars & restaurants stayed open, the streets were blocked, even after going to sleep past 5:00 a.m. C-A-R-D-S chants would rouse me from my sleep from the hotel lobby/bar.  I’d raise my head and smile.  THIS IS OUR TIME.

Monday Night in Atlanta’s Georgia Dome, the little boy in me that dreamed of playing basketball at the University of Louisville and later the adult that would just settle for witnessing a national title rejoiced.  I have no doubt that countless children with good parents stayed up way past their bedtime (hopefully not with black & white televisions with rabbit ear antennas).  From one generation to the next Cardinal Basketball lives on. I often doubted whether or not I would ever see my beloved Louisville Cardinals win a national championship.  That doubt is now replaced by a greater sense of pride that I already held for my school. For all of the games, all of the tickets, all of the late nights, sitting in traffic on ring road, all of the cold walks to the car after mid-winter’s night ballgame, this makes it all worthwhile.  It is finally here. We never changed who we are.  We’ve always been Cardinals, we’ve always been this way. And that says more about us than any trophy or banner.