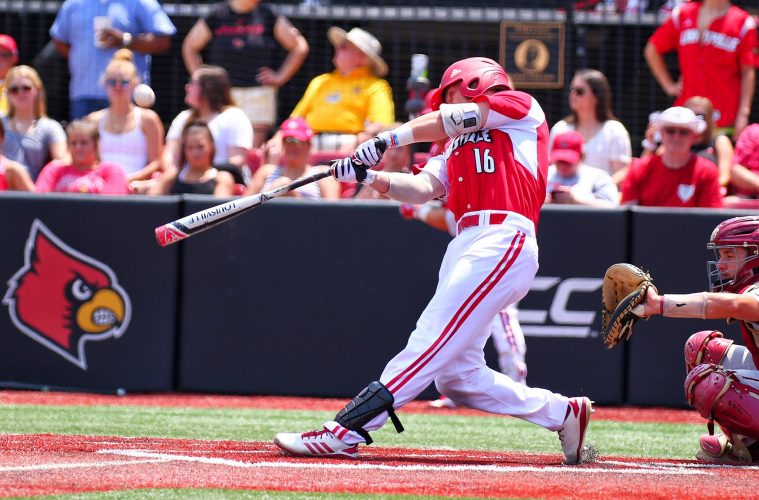 With the Atlantic Division and regular season title still on the line heading into the final weekend, the Cardinal Nine handled their business and clinched both. The #7 Louisville Cardinals (43-13, 21-9) exploded at the plate in two of the three games against Mike Martin and the #17 Florida State Seminoles (35-20, 17-13) winning the series opener and finale to take the series. The series win helped Louisville win their fourth Atlantic Division tile in five years, and their third #1 ACC Baseball Championship seed in the same span.

An early-inning offensive show of force was the driving force for the Cards, as Louisville took down the Seminoles in the series opener to the tune of 14-1, plating 12 of their runs in the first 3 innings. Every hitter in the starting lineup garnered a hit for the second straight game, with 5 of the starters recording double digit hit games. As a result of the victory, Louisville also clinched the Atlantic Division for the 4th time in their 5 years as a member of the ACC.

Despite it being the final regular season series of Mike Martin’s career, the Cardinal Nine showed no mercy from the very beginning. First baseman Logan Wyatt, third baseman Alex Binelas and designated hitter Zach Britton all went yard in the first inning, with Wyatt & Binelas going back-to-back to put up a four-spot in the opening frame. Heading into this game, the trio combined for 42% of the team home run total.

The very next inning wouldn’t get much better for the Seminoles, as Louisville would send 10 men to bat and plate 7 runs. Outfielder Jake Snider & Logan Wyatt would plate a pair of runs to start the inning, then Louisville would really unload on the Noles. Alex Binelas struck his second home run in as many innings, this time good for 3 RBI. To put Louisville into double digit run territory, outfielder Drew Campbell would smack his 12th double of the year to bring home two more runners and give Louisville an 11-0 advantage after just 2 innings.

It being yet another series opener meant it was yet another spectacular performance from starting pitcher Reid Detmers. In his 14th start of the season, the sophomore southpaw struck out 11 Seminoles for his 8th time posting double digit strikeouts this season. It also pulled him just a little but closer to UofL history. He would end the night with 138 strikeouts on the season, putting him squarely at second on the UofL single season strikeout list. He is just 8 strikeouts behind Brendan McKay’s 146 in 2017.

Alex Binelas would continue to have a stellar night at the plate, plating Louisville’s next two runs of the game. He would allow a run to scamper home thanks to a double play including grounder in the third, then drive home his 5th RBI of the night in the seventh from a sacrifice fly. For him, it was his second time this season driving in 5 RBI, and was also his second time of the season that he smacked two home runs in a game.

With sophomore outfielder Lucas Dunn driving in Louisville’s 14th and final run of the night in the eighth inning, the game was firmly in hand for the bullpen. Sophomore Glenn Albanese took to the mound after Reid Detmers’ exit, and the right-hander tossed 2.0 innings of relief while surrendering FSU’s only run of the game. Freshman Carter Lohman would enter in the ninth, tossing a scoreless inning and a strikeout to seal the victory.

Script Flips To Even Series

In a game completely opposite of the one just a day prior, the Cardinals were held in check for the second game of the series, with the Seminoles evening up the series behind a 14-3 loss. Leadoff hitter Lucas Dunn’s 3-5 day at the plate accounted for half of Louisville’s hits, with the Cards batting a measly 1-12 with runners on base.

The Cardinal Nine might have been the ones to score first thanks to a bases loaded HBP of outfielder/designated hitter Danny Oriente, but it was the Seminoles who dominated early. They’d plate the equalizer in the second inning, then explode for 5 runs in the third. All six runs were credited to junior left-hander Nick Bennett, and he would be yanked after just a 2.1 inning start, surrendering 9 hits as well in the process.

The plus side to being down early is having plenty of time to mount a comeback, which Louisville was quick to do. On the first pitch of the bottom of the fourth, designated hitter Zach Britton would launch his second home run in as many days, good for his 4th of the season. Following him up was leadoff man Lucas Dunn, who would send senior catcher Zeke Pinkham home off an RBI double and make it a 6-3 ballgame.

Unfortunately for the home squad, the Seminoles had other ideas about Louisville’s potential rally. After chasing Nick Bennett out of the game, FSU would also chase junior reliever Luke Smith out of the game behind a 3 run inning for the Noles. Smith would last just a hair shorter than Bennett, going 2.0 innings deep with just 1 strikeout.

Junior lefty Adam Elliott put up the best performance of the night from the mound, tossing 4 strikeouts over 2.2 innings of relief following Luke Smith. Freshman right hander Kerry Wright would start the eighth inning for the Cards, and the Noles would figure him out immediately. Recording only one out before being yanked, he would surrender 3 earned runs before giving the ball to fellow right-hander Austin Dickey. Dickey would stop the bleeding rather quickly, striking out the last two outs of the eighth inning.

But the bleeding wouldn’t stop for long. Adding insult to injury, Florida State would plate two more runs to give them an 11 run lead heading to the bottom of the ninth. Keeping up with the theme of the night, Louisville posed no real threat in their final times at bat, going three up/three down to end the night.

In the final match of the regular season with the #1 seed in the ACC Baseball Championship on the line, the Cards returned back to their winning ways and shutout the Seminoles to the tune of 11-0 to win the series. 8 of the 9 batters in the starting lineup registered a hit, while the pitching staff combined for 13 strikeouts.

Much like in the series opener, the Cardinal Nine got off to a fast start in the series finale. They’d plate the 6 runs over the first 2 innings of the game, including 4 in the opening frame. This would be their 30th time over the 56 game regular season that they would score in the first inning. The first inning 4-spot consisted of a pair of RBI singles from freshmen Alex Binelas & Henry Davis, a groundout RBI from sophomore Zach Britton, and a throwing error to bring home junior first baseman Logan Wyatt.

On top of plating 4 runs in the first inning, the Cards would plate a run in each of the first 4 innings of the game. The second inning saw a pair of runs scored, with junior outfielder Jake Snider driving in a run off an RBI single and Logan Wyatt sending a runner home while grounding into a double play. The third and fourth innings would see a run each, with junior outfielder Drew Campbell driving home a run courtesy of the fielder’s choice in the third, and Alex Binelas striking a sacrifice fly in the fourth for his 2nd RBI of the game.

Not only was it clicking offensively for the Cards, but it was clicking from the mound as well. Making his ninth start of the season, right-hander Bobby Miller finished the regular season strong. The sophomore held the Noles scoreless in his 6.0 inning start, allowing just 2 hits in the process. His 8 strikeouts for the day tied his second best strikeout outing of the season, and his best outing against a Power 5 opponent (8 vs. Wake Forest, 10 vs. Alabama A&M).

The Cards would wind up with both double digit runs and hit by the time their scoring efforts were complete. Junior outfielder Danny Oriente would get in on the hit parade with an RBI single in the sixth, then senior catcher Pat Rumoro would plate the game’s final two runs with a pair of RBI groundouts in the sixth and eighth innings.

Louisville’s three best bullpen arms would all combine to make sure there was zero doubt of a Florida State comeback. Senior pitcher Bryan Hoeing, junior pitcher Michael McAvene & sophomore pitcher Michael Kirian all pitched an inning each, with the trio combining for 5 strikeouts over the final 3.0 innings to secure the win.