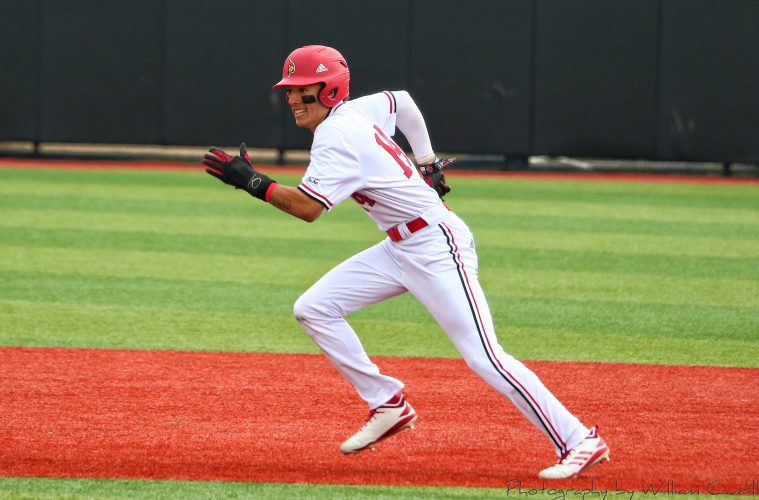 Kicking off conference play for the 2019 season, the #8 Louisville Cardinals (11-4, 2-1) faced off against the Boston College Eagles (8-6, 1-2) and won the first two games of the series to clinch the ACC opener. The series win moves Louisville to 5-0 in opening ACC series play since moving to the conference in 2015.

The Cards were not perfect, but they did enough to ensure that they would claim the series. For game 1, Reid Detmers and Michael McAvene combined for a shutout and 15 strikeouts while the offense garnered just 4 runs off 4 hits. For the series clincher, the pitching staff snapped their double digit strikeout streak at 10 games, while the Cardinal Nine plated 11 runs on 12 hits while batting 7-16 with runners in scoring position. Game 3 however saw the veteran team have an off day with neither the pitching staff or the batters playing particularly well in the final game of the series until the later innings.

While there are far more things to praise about this team than to criticize, a point of emphasis moving forward could be cohesion between the units to make sure that whenever someone has a bad day, there is someone there to pick up them up. Other than that, most facets of this team are much improved from their opening series loss vs. UConn, such as hitting with 2 outs & runners in scoring position, hitting in the bottom of the lineup, as well as base running. The ceiling for this team is as high as what they themselves set it to be.

Playing in their first conference game for 2019, Louisville landed their 10th win of the season with a 4-0 win in game 1 of their weekend series against Boston College. The victory moves Louisville to 5-0 in ACC conference opening games since joining the ACC in 2015. It was a pitcher’s duel for the first half of the game, and wasn’t until a pitching change for the Eagles allowed the Cards the opportunity to finally put more runs on the board.

For the third straight Friday, it was another masterful performance from left-hander Reid Detmers. The sophomore tossed his third straight double digit strikeout game, sitting down a total of 13 Boston College batters over 7.2 innings. This marked the first time that a Cardinal had three consecutive double digit strikeout outings since Brendan McKay did it in March 2017. Between the first two base hits he surrendered in his start, he retired 18 straight batters he faced. By the end of his outing, his season ERA would dip even lower to 0.33, while sporting an unbelievable strikeout-to-walk ratio of 41-5. His career-best scoreless streak was also extended to 23.1 innings, dating back to his first start in the very first game of the season.

The mound also saw good starting pitching from Boston College as well. Other than an RBI base hit from junior right fielder Danny Oriente in the opening frame, BC’s Dan Metzdorf kept the Cardinal Nine from establishing any offensive rhythm for most of his start. Until he was chased out of the game in the fifth inning, Louisville could only muster 2 hits and 4 walks until a runners on the corners jam prompted a call to BC’s bullpen.

Forcing Boston College to call to the pen would end up paying dividends for the Cardinals. In the next inning after the pitching change, preseason All-American first baseman Logan Wyatt would draw his 21st walk of the season, and outfielder Drew Campbell would send him home off a deep double to right-center field. Campbell would then capitalize on two consecutive BC wild pitches to plate Louisville’s third run of the game.

Louisville extended their lead in the seventh thanks to some defensive miscues from Boston College. Junior third baseman Justin Lavey would make it on base with his 7th hit of the season, then a walk from fellow infielder Lucas Dunn would get him on second. A passed ball followed by a fielding error would get Lavey all the way home from second and put a bow on Louisville’s scoring efforts for the game. Giving Detmers some relief on the mound after he had racked up 108 total pitches, fireballing junior Michael McAvene entered into the game with two outs in the eighth to close the door on the Eagles. He tossed a pair of strikeouts in his 1.2 innings of work, bringing his season total to 6 in 3.1 innings pitched.

Playing through two rain delays, one of which postponed the last 3 innings of the game until the next day, Louisville used a pair of high scoring innings to eventually win 11-4 and clinch the series and move to 5-0 in opening ACC series’. It was also a game where a few players who had been due for a good at-bat finally broke through. Outfielder Ethan Stringer, catcher Zach Britton and second baseman Jared Poland, who collectively had been batting .140 on the year, were responsible for 6 of Louisville’s 10 RBIs.

Through the first 3 innings of play, there wasn’t a ton of action to speak of from the mound or the plate. Collectively, both teams only garnered 4 hits and drew no walks. However the lack of performance at the plate wasn’t necessarily due to pitching prowess from either squad. Out of the 19 plate appearances that did not end in base hits, only 6 wound up being strikeouts, including 3 by starting Louisville pitcher junior Nick Bennett. Hitters on both sides made good contact but couldn’t quite get the contact they were looking for, as most plate appearances ended in line outs, fly outs and groundouts.

Once the game progressed into the middle innings, Louisville’s offense starting clicking and they exploded in a big way thanks to a little bit of help from BC. Two consecutive fielding errors to start the fourth inning and a walk from Logan Wyatt would load up the bases with no outs. Playing in the DH role for today’s game, junior Danny Oriente was the first to connect in the inning and give Louisville their second run of the game. Batting just .118 heading into today’s game, sophomore catcher Zach Britton came through in the clutch for the Cards, as he hit a bases clearing triple to break open the inning. While Britton had just 3 hits on the season up to this point, all 3 hits resulted in runs scored, including a 3 run home run in the first game of the season against UConn. Britton would wind up coming home from third base thanks to a sacrifice fly from Zeke Pinkham for Louisville’s third inning of 5 or more runs this season.

Louisville wouldn’t waste much time putting up another 5 spot, as they did it in the very next inning. Junior shortstop Tyler Fitzgerald would connect with Trey Leonard on third base for his 16th RBI of the season, then he himself would end up on third thanks to a throwing error on a failed pick off attempt. After Logan Wyatt would draw his 23rd walk of the season to put runners on the corners, freshman second baseman Jared Poland would send them both home on a screaming double down the left field line, his first extra base hit of the season. Poland himself would also score due to a mental error from BC’s catcher and secure Louisville’s first game with two 5 run innings since last season vs. Morehead State.

While the runs were pouring for Louisville, the rain wasn’t far behind. The first rain delay in the fifth inning had lasted nearly an hour, and the second one during the sixth inning was as a result of weather that was inclement enough to delay the last three innings of the contest until the next day. Boston College took advantage of the delay by plating a pair of runs in their first time up to bat since play had resumed as well as a 2 run home run in the ninth. Though facing a 10 run deficit on top of an insurance run driven by Ethan Stringer in the eighth proved to be too much for the Eagles, as they eventually fell to clinch the series for Louisville.

After looking so dominant in the series-clinching game the day before, the script flipped on Louisville for the potential sweep-clinching game. Boston College’s momentum from the previous game’s last few innings just moments before carried into the final game of the series, as they jumped on defensive and pitching miscues by the Cards. Louisville’s last ditch efforts at a ninth inning rally fell short, and as a result they could not secure the sweep, losing 6-4 and moving to 11-4 on the season.

The Eagles wasted very little time trying to avoid getting swept in a three game series for the first time this season. They plated the game’s first three runs, including a solo home run from BC’s leading hitter Sal Frelick in just the second at-bat of the game. A sacrifice fly from outfielder Drew Campbell in the second inning allowed the Cardinal Nine to chip into BC’s lead, but other than that Louisville struggled to generate much offense through the first six innings of the potential sweep-clinching game.

The pitching staff had been on a hot streak as of late, but it was only a matter of time before they were due for a game where they collectively were not on their A-game. 3 of BC’s runs were directly or indirectly caused by wild pitches & throwing errors, and both errors committed by the Cards were attributed to the pitchers. Right-handers Bryan Hoeing and Jack Perkins combined for 4 walks, 4 hits and 4 earned runs in 4.0 innings pitched. Sophomore Michael Kirian would have a better outing, tossing 2.0 scoreless innings as well as Louisville’s first strikeout.

Louisville put forth a little more effort in the last 3 innings of the series to try and end on a somewhat strong note. Sophomore right-hander Bobby Miller entered in the 7th and tossed 4 strikeouts while only allowing a solo home run. With the odds stacked against them heading into the ninth, the Cards were not going to go down without a fight. Tyler Fitzgerald and Logan Wyatt would get base hits to land in scoring with only one out, and the next three batters would all send runners home. A Danny Oriente groundout, Drew Campbell single and Henry Davis double would close the gap to only 2 runs with 2 outs in the ninth. Unfortunately an Alex Binelas groundout would cut the rally short and end any chances of a sweep.