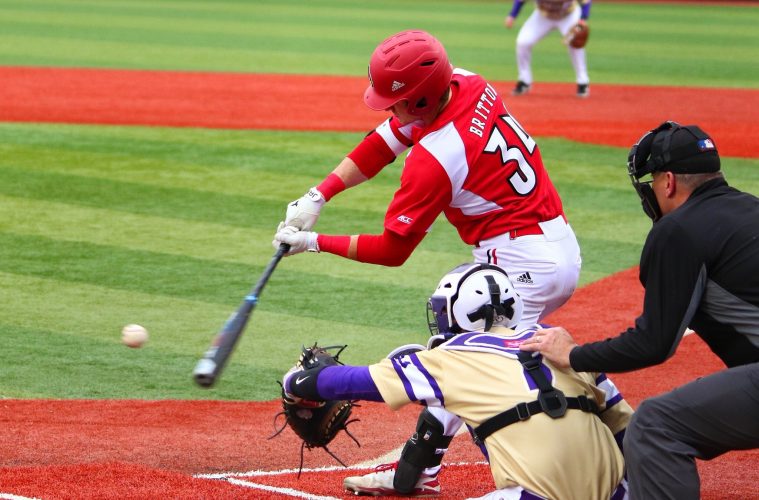 In their second home weekend series of 2019, the #8 Louisville Cardinals (8-3) squared off with the James Madison Dukes (7-4) and greeted them with a three game sweep for Louisville’s second straight weekend sweep. Over the course of the series, Louisville proved many times that they were better team on the diamond. They went 10-35 with runners in scoring position, 8-31 with two outs, and plated 17 runs on 26 hits.

While the offense was much improved, the pitching was Louisville’s key to winning and sweeping the series. All three starting pitchers set career marks in strikeouts, with the bullpen tossing 6 strikeouts in the 5.0 innings they worked. Louisville was also an allowed solo home run in game 2 away from completely shutting out the Dukes in all 3 games.

Detmers Tosses Another Gem Under The Lights

Like the Friday before, it was all the Reid Detmers show under the lights at Jim Patterson Stadium. The sophomore southpaw continued on his amazing start to the 2019 season, following up his no-hit performance in game 1 against Brown with a 8.0 inning, 14 strikeout masterpiece. Flying under the radar in light of Detmers’ showing, junior Tyler Fitzgerald also had a great night on the base paths, as the shortstop tied the program’s single game stolen base record with 4. He is the sixth Cardinal to swipe 4 bags, and the first since 5th overall pick Corey Ray (3/28/17).

Detmers started the game by striking out the first five batters he faced, and only allowed three base runners over his entire start. This included a hit-by-pitch in the third, a walk in the sixth, and a base hit in the eighth. By the time he had allowed a base hit, it had concluded a 14.2 inning stretch where he went hitless, having not allowed a base hit since the season opener against UConn. He currently has an active scoreless streak of 15 innings.

At the plate, The Cardinal Nine were much better than in their previous outing against Xavier. When everything was said and done, Louisville would bat 3-10 (.300) with two outs, and 3-9 (.333) with runners in scoring position. Runners left on base remained a bit high with 8, but overall Louisville’s hitting had shown improvement.

A sacrifice fly in the second inning from freshman third baseman Alex Binelas got the run scoring started for the Cardinals, followed by an RBI base hit from designated hitter Danny Oriente in the third. Louisville would not score again until plating a pair of runs in the fourth, with a run coming in thanks to a fielding error and another run coming in from an Ethan Stringer fielder’s choice. Henry Davis’s RBI single in the eighth would provide Louisville with their fifth and final run.

Closing out the game would be fireballing right-hander Michael McAvene, whose go-to fastball reached blistering speeds, topping out at 96 mph. He who would shut down the Dukes with an 11 pitch, 2 strikeout top of the ninth to remove any doubt of the Cards’ victory.

Louisville Dominates In All Facets To Clinch Series

From start to finish, the Cardinals left absolutely no doubt about who was the better team on the diamond. From starting pitching to relief pitching, and plate performance to base running, Louisville was betting in every category en route to an 11-1 domination over James Madison to clinch the series in game 1 of a doubleheader. For the second straight game, the starting pitcher set a new, double digit career high in strikeouts, with the bullpen combining for 4 strikeouts. At the plate, the hitting was contagious as only catcher Zeke Pinkham had a multi-hit game with 2 between the 11 hits by the Cards. Their base running also started to shape into form, as they were able to steal 7 bases, all in the first 5 innings.

Louisville’s hitters started the game patient at the plate and aggressive on the base paths. In the first 2.0 innings of the doubleheader, the Cardinal Nine drew 4 walks and stole 4 bases on top of plating the game’s first 3 runs. Groundout RBIs were the order of the day in the early innings, as junior shortstop Tyler Fitzgerald would hit one in the first and designated hitter Ben Metzinger followed up with his own in the second would give Louisville their first 2 runs. Then a triple from second baseman Lucas Dunn in the second inning that sailed into the left-center gap gave Louisville their first extra base hit of the game as well as their third run of the contest. Dunn also chipped into the base running aggressiveness, swiping a pair of bags in the first 2.0 innings.

The Cards followed up Reid Detmers’ amazing start with another quality start in game 2. Fellow southpaw junior Nick Bennett took to the mound the begin the doubleheader and gave the Dukes all they could handle just like Detmers had done the night before. He set a new career high in strikeouts with 10, only allowed 4 hits, and did not allow a run until giving up a home run with two outs in the seventh inning. Bennett’s endurance was on full display despite not matching his career long of 8.0 innings pitched, as he was able to throw 100 pitches even (season high) over the 25 batters he faced.

With the Cards seemingly starting to find their offensive stride, they were finally able to cash in on another big inning in the fifth with their third inning of 4 runs or more in 2019. Louisville was able to go through the entire batting order, and during this time they stole 2 bases, hit 2 singles & 3 doubles, drew 3 walks and plated 5 runs. Left fielder Jake Snider got the scoring started with an obstruction call at third base after an attempted pick off at third sailed over the third baseman’s head. Louisville proceeded to load the bases, and freshman infielder Cameron Masterman delivered his first collegiate hit with a clutch double that sent two home. Following his plate appearance, outfielder Drew Campbell brought home two runs of his own off a base hit to left-center to clear the runners in scoring position.

Following the five run fifth, Louisville was able to plate a run in each of the next three innings in which they made plate appearances. Sophomore catcher Zach Britton and freshman outfielder Trey Leonard would tally RBI base hits in the sixth and seventh innings respectively, then junior third baseman Justin Lavey would bring home a run of his own with a deep double down the right field line in the eighth inning. By the time Louisville was done at the plate for game 2, they had gone 3-10 with 2 outs and 6-20 with runners in scoring position.

After Bennett’s day on the mound was done, Coach Mac decided to go to his freshman to close out the game. Right-hander Jack Perkins and left-hander Garrett Schmeltz would each toss a scoreless, two strikeout inning, with Perkins dealing in the eighth and Schmeltz dealing in the ninth. The pitching staff would finish with 14 total strikeouts between all 3 pitchers seeing action.

Unlike the first half on the doubleheader where runs were aplenty, the Cards and Dukes found themselves locked in a pitcher’s duel and fortunately came out the victor in a 1-0 affair. The series finale capped off an amazing weekend of pitching that saw all three games featuring 10 or more strikeouts collectively.

Keeping up with the theme of dominant starting pitching, it was right-hander Bryan Hoeing’s turn to show his prowess from the mound. Making his 12th collegiate start and 38th overall appearance, the senior had himself a career day as he set career marks in both innings pitched and strikeouts. In his 7.0 innings of work, he struck out 9 James Madison batters and extended his career-best scoreless streak to 9.2 innings.

In the potential sweep-clinching game, Louisville bats cooled off a touch after being red hot in the first half of the doubleheader. The Cardinal Nine would not get a base hit until the fourth inning, but started to warm up towards the end of the middle innings. The Cardinal Nine would finally crack the scoreboard in the sixth inning, as a sacrifice fly from Tyler Fitzgerald gave Louisville the game’s first run. The junior shortstop leads the team in both sacrifice flies and RBIs with 3 and 13.

In Louisville’s first save situation of the season, sophomore right-hander Bobby Miller was given the task of closing the door on the Dukes. In the two inning save, he struck out 4 batters to secure Louisville’s second straight series sweep.