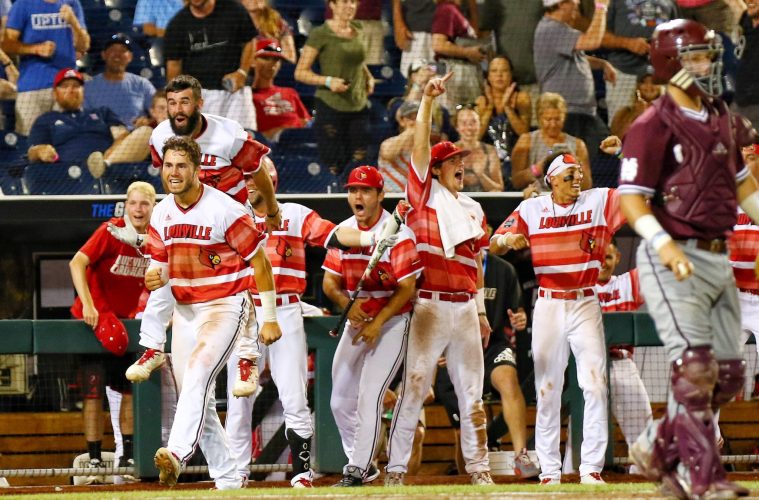 Playing in their first game under the lights for the 2019 College World Series, the #7 Louisville Cardinals (51-17) delivered some primetime drama as they walked-off the #6 Mississippi State Bulldogs (52-15) 4-3 thanks to late game heroics from Drew Campbell. The Jeffersonville, IN native went 3-4 with 2 RBI, including the one that sent Louisville to the College World Series Semifinals for the first time in program history.

Through the opening innings of the contest, there wasn’t a ton of offense to speak of for both clubs, with Mississippi State and Louisville combining for 3 hits through the first 3 innings. But this also came with them both getting 3 baserunners including a 2 baserunner situation in the third by the Bulldogs, so offense was not completely nonexistent.

The scoreboard would not be run-less for long, with the Bulldogs being the ones striking first. Starting pitcher Nick Bennett retired the first five batters he faced, but his command quickly fell off after that. The junior left-hander then proceeded to allow 7 of his next 14 batters faced to reach base, letting Mississippi State plate a pair of runs in the fourth.

Bennett would not last longer than the fourth inning, as senior right-hander Bryan Hoeing would be the first pitcher out of the bullpen. Inserting him to start the fifth, the Marlins draftee would instantly provide a spark from the mound for the Cards. In the first 2.0 innings of his 2.1 relief outing, he struck out 4 Mississippi State batters en route to fanning 5 overall. With all the opportunities the Bulldogs could have seized, Hoeing only allowed them to plate 1 additional run to give them 3 on the afternoon.

While Hoeing got a bit of momentum going, the Cardinal Nine could not capitalize on hardly any opportunity through the first six innings. 2 of their first 3 base hits of the ball game ended in base running miscues to kill any momentum that Louisville has generated. However once Mississippi State starting pitcher JT Ginn exited the game, Louisville jumped all over the pitching change.

The first 3 batters of the seventh inning reached base to load the bases, giving Drew Campbell a perfect time to get Louisville on the board. He would do just that with a base hit up the left side, with the junior outfielder plating Louisville’s first run while still keeping the bases loaded. Justin Lavey would then make it a one run game, legging out a surefire double play that Mississippi State’s second baseman could not field cleanly.

Louisville had another chance to make some noise in the eighth inning, but could not get out of their own way. Leadoff man sophomore infielder Lucas Dunn reached base to begin the inning, but another base running error cost them a chance to tie things up. Junior first baseman Logan Wyatt stuck a blooping base hit just past second base, with Dunn overshooting the base thinking it had been hit deeper into the outfield. He was thrown out as a result of the base running misstep.

The bullpen continued to pull through for the team, trying to give the team any chance they could at a victory. Freshman left-hander Garrett Schmeltz drew a crucial inning ending double play in the seventh to prevent more runs, while opposite handed freshman Jared Poland struck out 4 of his 6 batters faced. With MSU all-time hits leader Jake Mangum at first with two outs on the eighth, Coach Mac called an audible and inserted sophomore southpaw Reid Detmers. He would only throw two pitches before catching Mangum in a pickle to end the top of the ninth.

Facing increasingly unlikely odds of winning, the Cards said “not today” to the god of death. Junior outfielder Jake Snider walked to get the leadoff man on base for the fourth straight inning, then advanced the second thanks to error coming from an attempted pickoff. Danny Oriente took advantage of the runner in scoring position, with the junior DH sending him home for the ninth inning equalizer. But this would not be the most heroic moment of the night, as Drew Campbell once again came through for the Cards, delivering the game winning walk-off single to clinch the victory.

Louisville will be back in action tomorrow, taking on the Vanderbilt Commodores once again in the College World Series Semifinals. First pitch is scheduled for 7pm ET/6pm CT, will televised on ESPN and broadcast on 93.9 The Ville.