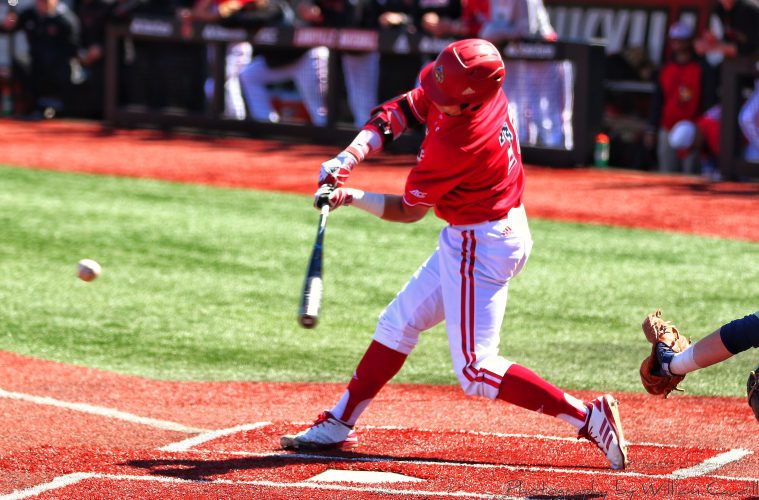 Coming off their first conference series loss of the season, the #10 Louisville Cardinals (19-6, 6-3) rebounded in their midweek game against the Miami (OH) Redhawks (18-5) where they defeated the red-hot Redhawks by a score of 6-1, moving to 6-1 in midweek games. The offense was a lot more well-rounded than in their series against Georgia Tech, as they tallied 5 hits and drew 7 walks. Between this and the 4 errors committed by Miami, every player in the starting lineup reached base safely.

While the Cardinal Nine weren’t the first to score in the ballgame, they got off to a relatively quick start. Going 3 up/3 down in the first inning, they proceeded to go through the entire lineup plus 1 in the second. With two runners in scoring position, a groundout RBI from outfielder Drew Campbell knotted up the game at one a piece and put him at second place on the team in RBIs with 14. Third baseman Justin Lavey sent home the runner on third with a base hit to take the lead, then he got to show off a little bit of base running that he normally doesn’t show. After advancing to second on a wild pitch, he would steal third and home to become the first Cardinal since Logan Taylor in 2016 to steal home. Three at-bats later, junior first baseman Logan Wyatt would complete the inning’s scoring with a bases loaded walk and give him his 34th walk on the season. By inning’s end, it would be Louisville’s 10th inning of the season in which they plated 4 or more runs.

The Cards would put up another crooked number in the fourth thanks in part to a pair of fielding errors and a wild pitch committed by the RedHawks. Freshman outfielder Trey Leonard would single to get on base, then make it all the way to third thanks to a failed pickoff attempt. Fellow outfielder junior Jake Snider would send him home, then he himself would wind up on third thanks in part to an error. A wild pitch would complete his trek around the bases and give Louisville their sixth straight run of the contest.

Starting pitcher Luke Smith didn’t strike out a ton of batters, but he was still effective nonetheless. He only allowed 1 earned run over his 6.0 innings on the mound (0.1 away from his career IP high), and gave the Miami hitters a steady diet of pitches that were hard to make great contact with. While he surrendered 5 hits and struck out only 2 batters, he also forced 15 groundouts and flyouts.

Once his day was done, senior right-hander Bryan Hoeing made his 2019 bullpen debut after having been moved from the bullpen to the starting rotation to start the season. He would look much better than in his last two starts, as he tossed a pair of scoreless innings and struck out 3 batters. The final inning of the night was given to a pair of freshman, as Carter Lohman and Glenn Albanese were tasked with putting away the RedHawks, with the latter making his collegiate debut. The duo kept Miami off the board in the ninth, securing the win for the Cardinal Nine.