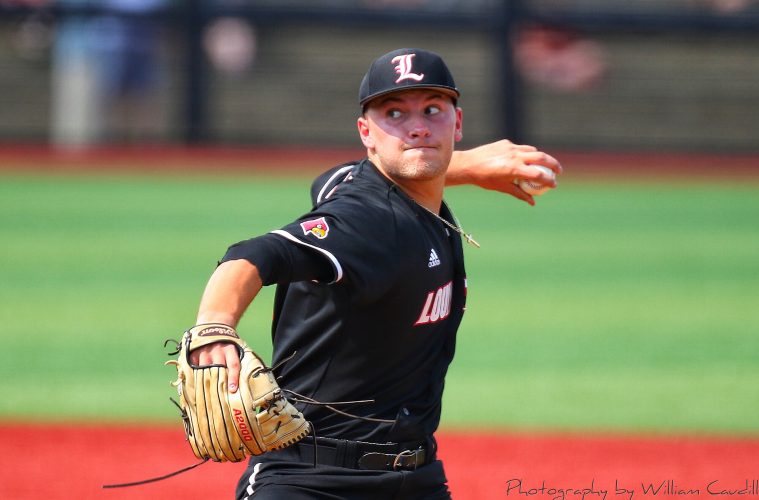 In front of a raucous Jim Patterson Stadium crowd, the #7 Louisville Cardinals (44-16) unfortunately fell victim to their late season offensive woes, falling to the #3 seeded Illinois State Redbirds (36-24) to the tune of 4-2. A masterful performance from starting pitcher Reid Detmers was not enough to overcome a 6-30 hitting performance from the Cardinal Nine, as Louisville did not plate a run until the sixth inning.

Having to wait until the second game of the regional for the Cardinals, Reid Detmers was still his dominant self despite not getting the ball first on the weekend. The sophomore southpaw went 7.0 innings deep, striking out 11 Redbirds hitters in the process. On top of fanning a bulk of the batters he faced, the Chatham, IL native only surrendered 1 run through the first five innings of the contest.

Like their game before, Louisville’s offense was a bit sluggish to start the game. They would not plate a run until the sixth inning of the game, when Louisville would load the bases with no outs. Junior shortstop Tyler Fitzgerald tied things up with a groundout RBI, but first baseman Logan Wyatt gave the Cardinal Nine the lead off a base hit that fell into no man’s land between the left & center fielders and the shortstop.

Though the Missouri Valley Conference regular season champs weren’t about to let Louisville run away with it like the Cards had done against UIC the day before. As the game progressed through the middle innings, Detmers had started to lose a little bit of command. Leading off the sixth with a HBP, that runner would eventually be brought home as an attempted double play to end the inning would be unsuccessful. Compounding matters, the Redbirds would send a pinch hitter to the plate with two runners on base, and he would bring them both home off a double down the left field line to put up a 3-spot in the inning.

Down the stretch even after their sixth inning 2-spot, the Cardinals offense sputtered and could not generate any momentum. Over the final 3 innings at bat, Louisville could only muster one base runner, going 9 up/9 down in the seventh through ninth innings. They wound up suffering only their second loss of the season when outhitting their opponent, moving to 39-2 on the season when doing so.

Following the loss, Louisville will take on the Indiana Hoosiers (37-22) tomorrow at noon in the regional elimination game. In the case they defeat the Hoosiers, they will have to take down Illinois State twice in the regional final to advance to the Super Regionals round.