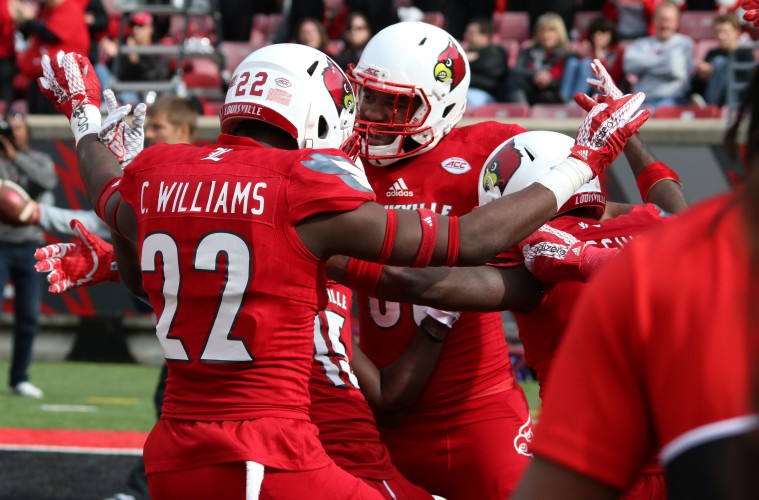 Starting with the Cornerbacks Shaq Wiggins & Trumaine Washington were solid at Corner last year and Jaire Alexander continued to emerge as a talent throughout 2015.   This Cardinal trio of Corners returns again and hopefully a year better.  Trumaine was extremely disruptive in a variety of ways and had a string of causing turnovers that went for UofL for Touchdowns. Washington is very good in coverage, but is an excellent open field tackler.  Tackling in the open field also applies to Jaire Alexander who this past Spring spent some time at the ‘Star’ position that is typically played by Josh Harvey-Clemons.  Jaire as a punt returner is also a weapon, but it’s his ability to be a complete CB as a sophomore that is so exciting given how well he played last season as a true freshman.  Where is the ceiling for Jaire?  Shaq Wiggins proved that he can handle being on an island with some of the ACC’s best Wide Receivers, but does need to tackle better than he did in 2015.  Overall this Louisville Cornerback triumvirate will likely be the main corners.

But that doesn’t mean that there isn’t room for competition.  Cornelius Sturghill is Louisville Football’s fastest player and Ronald Walker is an early enrollee JUCO (#2 overall CB in JUCO) and originally signed with Ole Miss out of high school. Additionally the Cards have converted wide receiver Alphonso Carter from wide receiver in order to get his athleticism on the field. Carter has been plagued by hamstring issues that occur when he runs straight ahead (when he runs routes) but isn’t as problematic when backpedaling in the secondary.  Of this group Louisville has 3 very effective special teams contributors at the very least and perhaps one or more can crack the regular rotation as well.

At Safety Chucky Williams, Josh Harvey-Clemons and Zykiesis Cannon all return as starters for the Cardinals.  Additionally what we saw in the Spring was that DEE SMITH HAS TO PLAY. Dee covers a great deal of space, shows great instincts and is disruptive in the passing game.  Chucky Williams & Josh Harvey-Clemons both cover a lot of ground and pack a punch once they arrive to ball carriers.  Cannon also looked very impressive this Spring as well.  There is a ton of experience and talent returning at Safety so UofL’s defense must reap the benefits here.

The play of Dee Smith & Jaire Alexander both may necessitate  a shift in how Louisville’s secondary (and maybe the defense overall) is set up. The Cards have a lot of really good safeties & corners in the secondary and at the very least UofL Football will have tons of depth in the defensive backfield….but at the very best it may give Todd Grantham more options to give offenses different looks defensively. This past Spring Louisville played some DIME packages in attempt to get all of this talent on the field.  JHC could line up in this formation and be a quasi OLB,

While talking about the Safeties we can also not fail to mention Khane Pass & Terrence Ross.   Khane Pass has a lot of talent and after redshirting a season will be ready to find the field in various capacities. We couldn’t get a feel for Ross who appeared in some Spring Practices after sitting out 2015 with an ACL tear. Ross has immense talent and was in favor in the latter half of the 2014 season with the Petrino & Grantham staff. If Ross can come back, it would give the Cards another option at Strong Safety.

Incoming safeties PJ Blue, London Iakopo and Larmarques Thomas all come in with impressive credentials, but we’ve got to see them on the practice field before determining where and how they may fit in.  Also Chris Taylor-Yamanoha comes to Louisville with incredible accolades as well, though many thought that CTY would be a wide receiver for Louisville’s offense.  Taylor-Yamanoha will have the same chance as the incoming safeties, but the nice thing for all of the incoming players is that the Cardinal secondary has plenty of experience and talent in 2016 that fans can be patient with this group to properly develop.