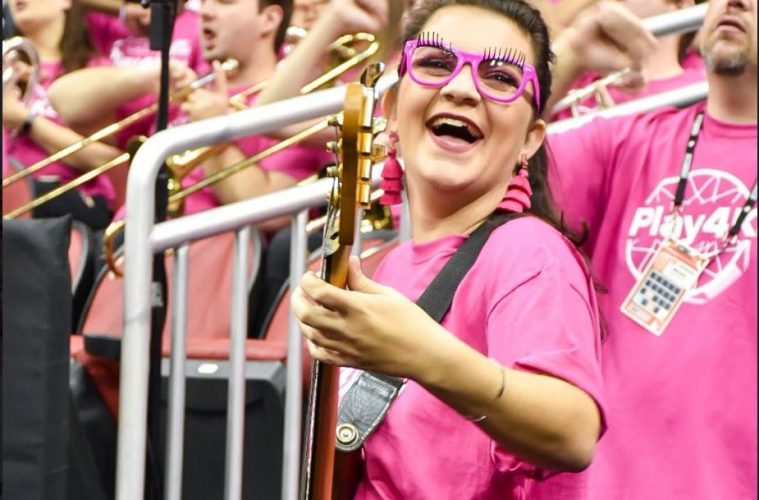 People of the Ville; Pauline Ottaviano

Meet Pauline!! She is often seen on the sidelines of men’s and women’s basketball games at the KFC Yum! Center with the Pep Band and a bass strapped to her chest. Get to know her better with this short interview and say hi next time you see her! She’s a very friendly face!

Are you from Louisville?
I am not, I’m from Syracuse New York. I came to Louisville in 2013 for undergrad, stayed for grad school and still haven’t left.

Is the national title season why you choose to come to Louisville?
Not really, I was a music student… I liked the music school. I was a Brown Fellow in undergrad so it was a full ride so it was hard to turn down. When i came down for a visit I was obsessed. My mom and I went to the Derby Museum & sat down at a little cafe in the back and I started crying, She asked if I was okay and I told her I wanted to go (to UofL). This was before I got the scholarship and she told me that we would figure it out.
I got my Masters in Sport Administration which kept me busy I got to work the Super Bowl, the NFL draft..

I’ve seen your mom down here, did she follow you and move down here?
Her and my dad come to visit as much as they can they love it down here, not much to do in Syracuse. This city is fun and great and all the opportunities UofL’s given me they’ve become honorary UofL fans.

So how did you get involved with Al (Greener) and the Pep Band and what all instruments do you play? (Pauline can often be seen playing the bass at home basketball games)
My freshman year at orientation I met Jared (Anderson) and he suggested I join Pep Band. I played baritone at first… I went with him to the first meeting and they can’t get rid of me now. I can play the electric bass, tuba, trombone, mostly the bass class. I did music lessons as a kid growing up.

What are some of the most memorable players/games/events you’ve participated in?
In the fall semester I got to work the 50 Yardline Banquet (called something else now) but the AD would do it for all the donors, I got to work it and it was Vince’s (Tyra) first one and it was cool to see the culture change and all the cool new stuff that is coming into the university. My freshman year Spring Break I went to the men’s and the women’s AAC tournament back to back. Slept for 6 hours got back on the bus and drove the other direction and that was fun and then a couple weeks ago when the women beat UCONN.

Career goals after this chapter wraps up?
I finished my masters in December, I’ve been working full time for Varsity All-Star since October. I am a registration coordinator for cheerleading competitions all over the country. So I make sure teams are registered and doing check ins on site and logistical set up so I get to travel pretty much every weekend.

Advice for newcomers at UofL?
Get involved and do stuff. There were a million things I could’ve turned down and stayed in my dorm and studied or watched Netflix but choosing to say yes to pep and marching band lead me to where I am now getting to do all kinds of cool stuff.

We are glad to have you, Pauline! Go Cards!!!