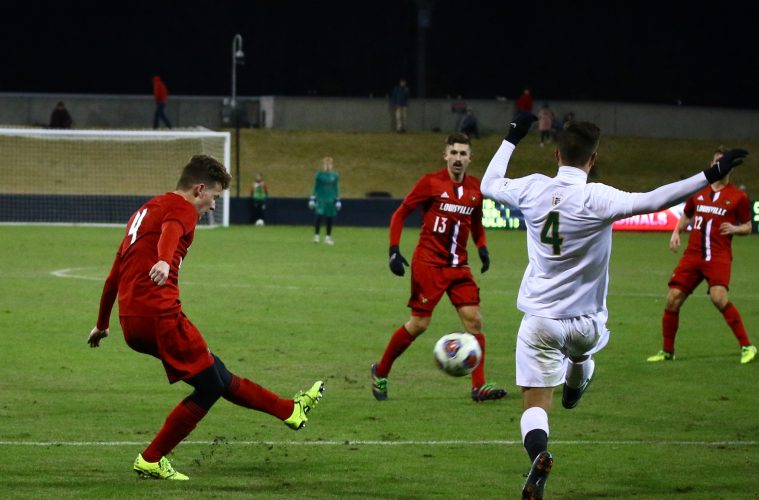 Tate Schmitt once again comes through for Louisville with a late goal in the 78th minute to give the Cards the 3-2 advantage in front of the home fans on Sunday evening.  The Cards are now 12-2-4 on the season and have advanced to the Sweet 16.  The junior, Schmitt, has connected for the game-winning goal in each of Louisville’s last three NCAA Championship matches dating back to last season.

A native of Phoenix, Arizona, Schmitt also scored the game-winning goal in the Cardinals’ 2-1 overtime victory against UCLA in the second round of the 2016 NCAA Championship and had the game-clinching tally in last season’s third round win against Notre Dame. The latest goal was Schmitt’s third game-winning tally of the season and his ninth career game-winning goal. Overall, Schmitt has eight goals this season and 20 career goals in his three collegiate seasons.

Credit senior, Tim Kubel, with the assist.  Schmitt worked the ball into space from the right side before scoring on a left-footed strike from 25 yards away. The shot deflected slightly off a Dons defender before finishing inside the right post.

Louisville was also powered in the scoring column on Sunday by goals from juniors Adrien Cabon and Adam Wilson. Cabon started the scoring in the first half with his third goal of the season, while Wilson added his first goal early in the second half. San Francisco (10-9-0) found the equalizer following each of the first two goals by the Cardinals but could not answer a third time as redshirt freshman Will Meyer made a pair of saves in the final eight minutes to clinch the win.

That would be enough for the victory and to advance in the post season to face: