Believe it or not, UNC marks Louisville’s mid-season game. One more half to go to get the gang rolling into the post-season on all cylinders. The cards are sitting at 14-1 and ranked #5 in the country. Things will become DECIDEDLY tougher in the coming months as the ACC has some serious contenders.

January is typically where Rick finds his best lineup. Expect a little more lineup tinkering, coach speak motivation and some stumbles along the way.  February is where Pitino puts it into motion with final rotations, final installments of offense, defense and press.  Most importantly, they begin to settle into their roles and that is where the improvement happens.  His February/March runs are pretty famous.

At this point in the season many players have been thrown into the mix.  The Cards have seen a decent mix of weak, medium and tough opponents.  I broke down the players statistics into their minutes played to come up with a %. That % is essentially the chance they can produce any particular statistic in 1 minute of play.

The hot topics lately are; “need consistent production out of the 3” and “need to find our 5”.  While these statistics will highlight the top performers per minute in different categories – there are many moving parts.  When you face team that are half court, full court, ball control or risk takers – different people fill the bill.  Did you notice against (up and down) Wake Forest Rick played a large rotation with dispersed minutes?  When things are fast you can get away with playing people weaker in half court D.  Slashers are all welcome.  Against (half court) Clemson he locked it down and focused on a few.  Half court teams need higher efficiency on offense and people who can shut down their opponent on D.

Make your favorite lineup; offensive, offensive – whatever you like.

Here are the top 6 performers by category so far this season.  That is the % chance they can produce 1 statistic in 1 minute of play for each category (based on what they have done thus far).

Notes:  Onuaku really stands out for the big men doesn’t he?  Whatever is going on with him – hope he figures it out soon.

Here is the entire chart for all major minutes guys. 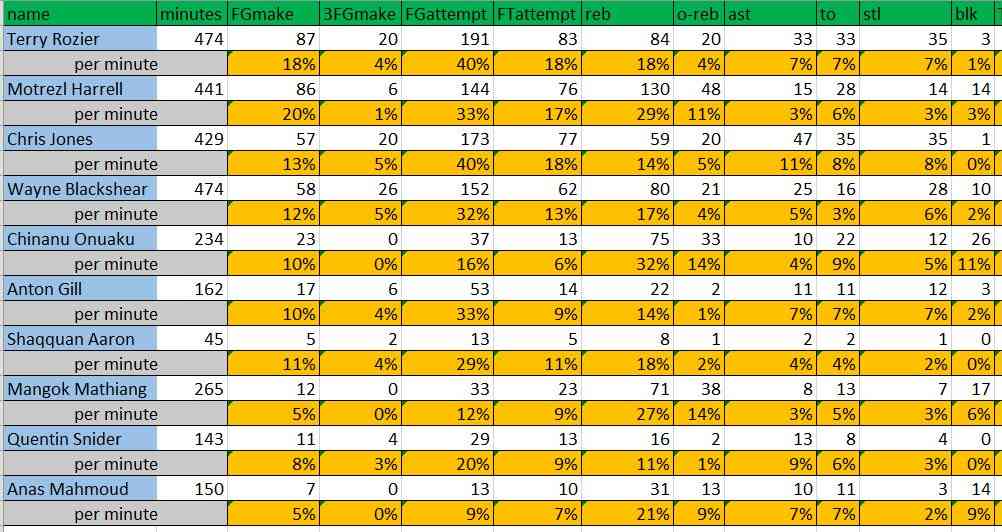