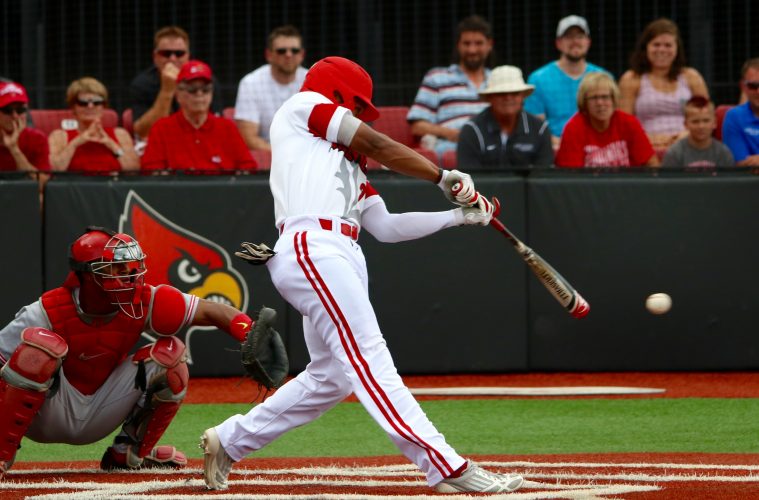 This year Louisville Baseball is expected to be even more active for the 2016 MLB Draft. In fact, UofL could have a lot of action in the early rounds including a possibility of Corey Ray becoming UofL’s highest ever draft selection.

Everyone believes that junior Corey Ray is a Top 10 selection.  There isn’t a mock draft out there that has Ray going outside of #12 and most mocks have Corey in the Top 8.  It’s hard to argue because we’ve thought a lot of Ray since his freshman year as a Cardinal.  The biggest thing that we can’t measure about Corey statistically is the clutch factor.  He just makes plays when it matters.

A closer who throws 100 MPH is difficult to find.  A guy with a slider & a change up like junior Zack Burdi can go to reliably is something few clubs can pass on.  Most mock drafts have Zack going as high as the 1st round in the 20s to the 2nd round in the 50s.   Burdi really helped himself late in the year with outstanding stuff.  Zack may not go in Round 1, but he’ll go early.

Kyle Funkhouser returned for his senior year last year after turning down the contract offered by the Los Angeles Dodgers following his selection as the #35 overall pick.  Funk took a slight slide here in draft order after a slow start to 2016.  But any real slide on Funkhouser is short-sighted as he has pitched extremely well lately and teams would be making a long-term investment in his stuff…and not a handful of collegiate starts.  Nevertheless Kyle is likely a 2nd-3rd round selection in the Draft.

One of the hottest names in the draft the last few weeks has been Louisville junior catcher Will Smith.  The KCD product has been on the Johnny Bench Watch List this year, hit .380 had an OBP% of .476 and just is one of the most productive catchers in college baseball.  It’s tough to say if Will would get drafted into a position where he might consider forgoing his senior year of college baseball but there is considerable buzz surrounding the Cardinal catcher leading up to the draft. Slotting his position is difficult due to his sharp upward trajectory.

Also a .380 hitter junior Nick Solak will have a decision to see if coming back for a senior year can boost the All-American up the draft boards or if this is his peak position.  Solak’s probably the best hitting 2nd baseman in college baseball, but pro teams may see him as an outfielder at their level.  If Solak can improve his glove at 2nd base (it’s a really good glove let’s be honest) he’s got a shot to be even higher in a year’s time.  Who drafts Nick, what their plan for him is, and what contract terms are offered will determine a great deal here….but there is a question of ‘what is there left to do in college?” for Solak.

The ACC Pitcher of the Year, junor, Drew Harrington will also hear his name called this weekend.  Lefty’s with 2.08 ERAs are hard to come by.  Someone is going to pick Drew starting in the 5th round.  Personally I’d take Harrington higher because his movement has been very good.  But perhaps the pros need to see another year of him starting to take him the 2nd round or higher. Drew’s upward trajectory could push him back to school another year or it may just be time for Harrington.  We will see.

The draft eligible sophomore (redshirt) is going to hear his name called this weekend, but there really is a lot left to prove after potentially being a 5th round selection and staying in college.  It is different than Solak’s situation because Tiberi is just now getting his shot in college. Blake has room to grow at the plate & in the field at 3rd base.  Tiberi is a 3rd baseman and can probably also play 1st if necessary….and he just has more to grow in college.  A pro team could see Tiberi’s potential and offer a deal he could not refuse, but personally I see Blake returning to UofL for his junior season.