The Labor Day showdown between Miami and Louisville comes full circle, as last year’s season ending opponent becomes conference foe in a season opener.  This article will focus on Miami and their tale of two seasons last year and how they match up with the Cards on a few key areas.   This article originates from my personal blog SteelCard.BlogSpot.com.

We are all aware of the excitement surrounding Bobby Petrino’s offensive schemes.  The Cards are loaded with talent and have probably the best running back and receiving corps in the ACC.  There is no doubt they will move the ball effectively and will, at least, cause the Miami defense to be on their heels.  If history dictates the future, Louisville (with Bobby-Ball) will find a way to put points on the board.  More importantly, the offense will need to protect the ball, extend drives, and give the new Louisville defense time to make necessary adjustments.

The Canes will have Duke Johnson in this match up.  Unlike last year’s Russell Athletic Bowl loss, we can expect Miami to put up more than 14 yards rushing in this game.  Johnson was easily Miami’s most productive performer than anyone else per game.  He accounted for over 18% of their all purpose yards in less than 8 games. Prior to his season-ending injury against Florida State, the team’s offensive AND defensive production were significantly different.

Offensively, Miami was very balanced with Johnson in the lineup.  They averaged 260 yards passing, 199 yards rushing per game, and scored 36.4 points per game. (FSU stats included).  Without DJ, they passed for 274.6 yards, 99 yards rushing, and 29.8 points per game.  To illustrate the difference, average teams scored 29.2 points per game in 2013/14; their previous mark would have ranked them 22nd.

Other key statistics (without DJ):

The lack of offensive output hurt a young defensive unit significantly.  One benefit of more trips to the red zone is at least they extend drives and give a defense time to rest.  This is critical, especially with a lot of younger players.  The defense allowed nearly 16 points per game more without DJ in the lineup.  One can argue, a tougher portion of the schedule was ahead after Johnson’s injury, but statistically, the Canes went from a solid Top 25 team to barely average.

Miami’s need is to establish a running game early and force Louisville up in the box to stop them.  The key match up will be the Cards’ run defense, in the new 3-4 scheme, versus the rushing attack of the Canes.  If Louisville is successful in slowing down the running attack of Miami, they will force one of two quarterbacks to take to the air.

The quarterback race, at Miami, is between Brad Kaaya, a true freshman from California, and Jake Heaps, the graduate transfer from Kansas (via BYU).  Kaaya passed for over 5,000 yards and 40 touchdowns in his high school career.  At 6’4″ and 218 lbs., he looks to be a solid prospect for the Canes.  But how will he perform against a complex 3-4 defense if required to change calls, protections, and such?  Heaps would be the more experienced play caller by far, but his 99.54 career-passer rating leaves his decision-making suspect, at best.  If Miami can develop a package around one of these two quarterbacks, they may have some success.

The Cards jump on the Canes early and force them to play from behind.  If the Cards get a two or more touchdown lead, look for Miami to try and stretch the field to close the gap.  Miami has speedy receivers on the edges, but the inexperience at quarterback may be the final measure here.  Duke Johnson will not be stopped completely, but he can be slowed down with the right defensive schemes.  The Cards’ base 3-4 defense should be stout enough to contain the Miami running attack. 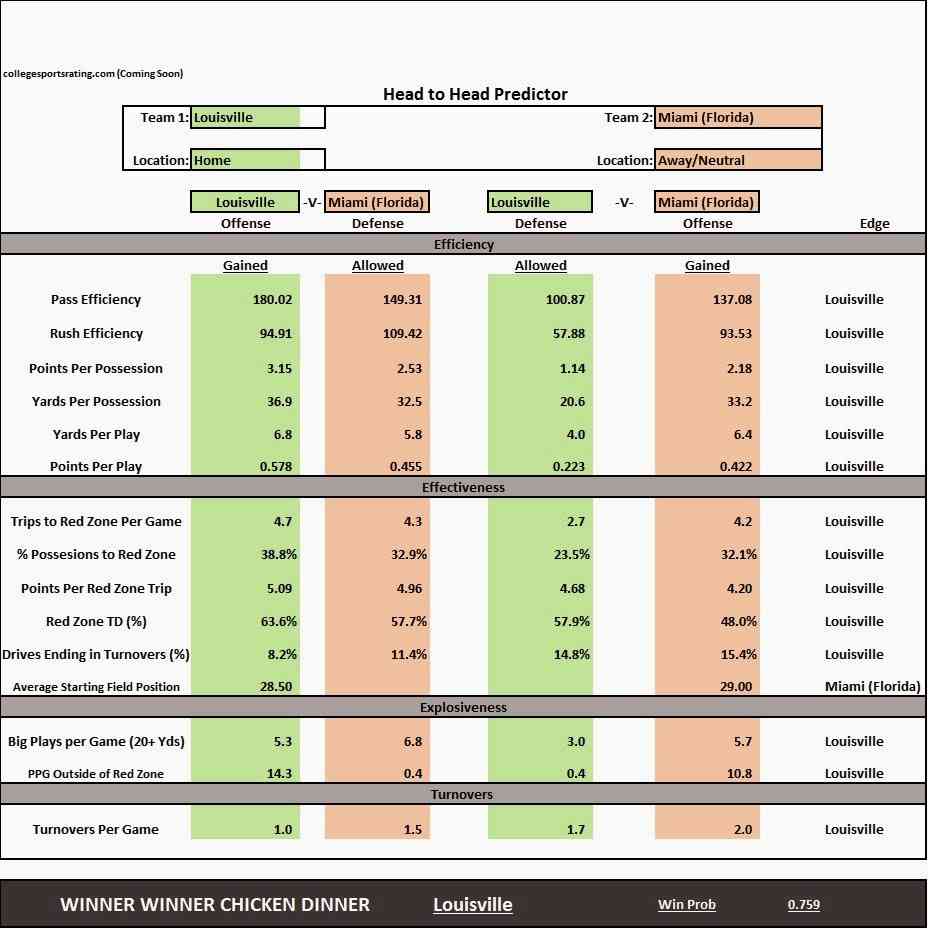