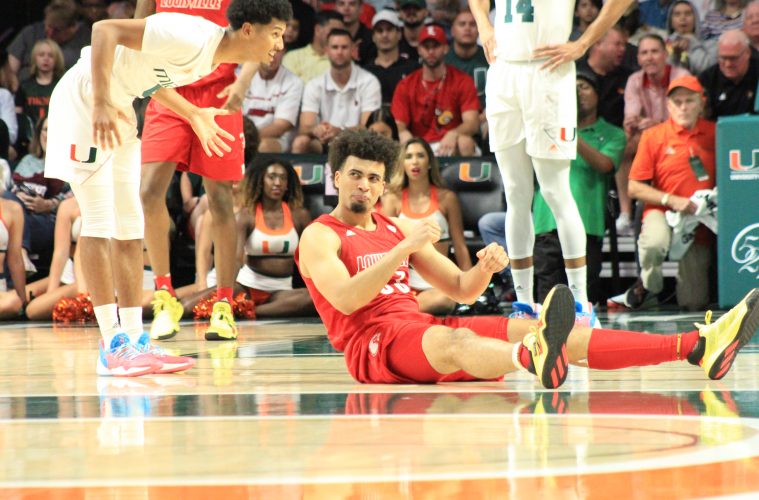 Louisville fans have a pretty good track record of being self-deprecating. As the joke goes, the best way to get Card Nation to show up is to guarantee beer sales and good weather. So it should come as no surprise that a good chunk of the normally green Watsco Center in Miami, FL was clothed in red as the Louisville men’s basketball team opened the season, as well as ACC play, against the Hurricanes. Another saying you might know is, “Having your cake and eating it too.” The assembled Cardinals fans got all that with a cherry on top as the Cardinals dominated the Hurricanes in an 87-74 romp.

Trepidation was certainly warranted after a shaky performance against Bellarmine, and Chris Mack’s comments regarding the scrimmage with Ohio State. Thus it was easy to feel a bit uneasy as the Cardinals opened the game with a shot clock turnover followed by a quick three from Miami’s range shooter D.J. Vasiljevic. The Cards looked shaky in the first five minutes. Darius Perry picked up two quick fouls and took a seat, with his team seemingly a bit shaken without his presence despite Fresh Kimble’s adequate subsitution.

Whatever jitters may have existed were quickly tossed away, just as quickly as Ryan McMahon tossed in three three-pointers by the midway point of the first half. Indeed, the Sarasota native was shooting 100% at that point with the backing of his own personal local fan club. There would be times during the game (as Miami fans drifted away) that Cardinals fans easily out-cheered, out-booed, or basically out-anythinged the Hurricanes fans. We’d be remiss if at this time we didn’t point out that relatively new University of Louisville superfan William “Bill” Murray was firmly planted in the front row behind the UofL bench. We’re not saying it means anything…but it totally means something.

From after the first media timeout to the final horn, it was all Louisville. This despite the fact that Chris Mack tinkered with the lineup for essentially the entire game. At least eight different combinations of players saw the floor. It’s natural to assume that Mack is still trying things out, seeing where his team’s strengths and weaknesses might be. It’s hard to say if the coach is as pleasantly surprised as the fans, but what might not have seemed like a very deep team seemed to play like one tonight.

Ryan McMahon earned his starting gig with 16 points thanks mostly to shooting four for seven from three-point range. Add to that two assists and two steals and you’ve got a very impressive start to the season. Steven Enoch looks healthy after an eleven point, twelve rebound double-double. He looked to have taken a knock to the hand late in the second half and was taken out as a precaution, but returned later with no signs of injury. Dwayne Sutton did what Dwayne Sutton does with 16 points, 5 rebounds, and an assist.

But folks, let’s talk about Jordan Nwora. His presence was certainly felt during the first half but it wasn’t an imposing one. Defensively he’s contributing and moving the ball well; all positives. The second half, however, was all Jordan. The Cardinals fans at Watsco Center (and indeed Twitter in general) erupted after Ryan McMahon tossed the alley-oop for a thunderous Nwora dunk. With 12 minutes remaining in the game Nwora had his double-double and would finish with 23 points and 12 rebounds in 31 minutes of play. Gold jersey, spiritual leader, whatever you want to call him is likely fitting.

Oh, by the way. The freshman class didn’t do so shabby themselves. Samuell Williamson’s 13 points announced his arrival, and at times he was on the court with two of his fellow classmen as Mack allowed his team to play things out themselves. It was as if Chris Mack had done all his homework by halftime and had some time to dick around on NBA2K. Miami was able to cut into the lead as a result, and the final 13 point margin does not tell the full story of the dominant Louisville performance. But valuable in-game experience was gained and Chris Mack has plenty of notes on depth and lineup combinations very early in the season.

As for Miami, Jim Larranaga’s crew could never really get moving. There were sparks in the first half, and again in second half garbage time, but the energy just wasn’t there. Distance man D.J. Vasiljevic was consistent throughout the night but leading scorer Chris Lykes struggled to contribute early. Both he and Vasiljevic finished in double figures along with Kameron McGusty, but that’s three scorers in double figures compared to the Cardinals five.

Louisville dominated in essentially every aspect, although the stats evened up a bit late in the second half as Igeihon, Williamson, and Quinn Slazinski were in the lineup. Nothing against the younger guys, but the polish of maturity just isn’t there yet and it allowed Miami to claw back to within a reasonable distance. Most impressive, however, is the 42 Louisville points in the paint to the Hurricanes 28. Steven Enoch and Dwayne Sutton showed their stuff while Samuell Williamson and Aidan Igiehon showed they’ve got what it takes. All good things.

The Cardinals continue the campaign Sunday against Youngstown State as they return to a more normal early season schedule. Chris Mack is very much on the record about not being thrilled about opening the season with ACC play. But his players didn’t seem to mind. The Cardinals are now 1-0 overall and 1-0 in ACC play.

So they’ve got that going for them, which is nice.