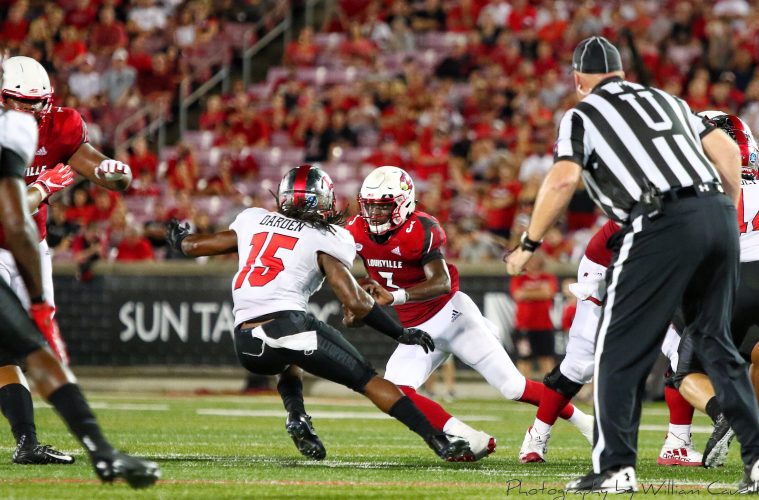 On Monday, UofL head coach Bobby Petrino announced that the 6-foot-1 quarterback will be the starter against the Cavaliers in the Cardinals’ ACC opener in Charlottesville, Va.

After coming off the bench and sparking the Cardinals to consecutive victories, Cunningham will lead Louisville out of the gate in a crucial league game.

“It’s a feeling that I’ve been waiting my whole life,” Cunningham said. “I’ve waited for the opportunity to prove what I can do. I just have to keep going and keep working.”

The Montgomery, Ala., native has directed the offense to eight scores over the last two games in relief. He has rushed for 183 yards and one score, while passing for 163 yards and a score.

“Malik’s done a good job,” quarterbacks coach Nick Petrino said. “He’s always been a guy that’s brought great energy to the team. He’s an energetic kid who brings a lot of excitement to the team. You can see when he goes in there, the other players react to his energy.”

In the come-from-behind win last Saturday over Western Kentucky, Cunningham became only the fourth quarterback in school history to rush for over 100 yards in a game – totaling 129 yards on 21 carries.

“This is just how I play, it’s just natural,” Cunningham said. “I like to make plays with my feet and try to make things happen on each and every play.”

While Cunningham has the ability to change the game with his running ability, the redshirt freshman wants to show off his skills as a thrower.

Cunningham was 10 of 18 for 81 yards against Western Kentucky and 6 of 7 for 75 yards and a touchdown versus Indiana State in his collegiate debut.

“It was technique and his whole summer being in the weight room that has improved his arm strength,” Nick Petrino said. “He always threw the ball well, but he struggled with certain throws because he wasn’t that strong. Now, you can see him make throws from one sideline to the other.”

While dangerous with the ball in his hands, Cunningham is continually improving as a passer. He is completing passes at a 64.0 percent clip and knows there’s still room for growth.

“I’ve improved a lot,” Cunningham said. “The coaches have helped me improve as a passer from my first day here. I couldn’t even close my shoulder, and now I can close it, it’s just progressing every day. I’ve also got a lot stronger in the weight room. They’ve been trying to get me bigger and stronger.”