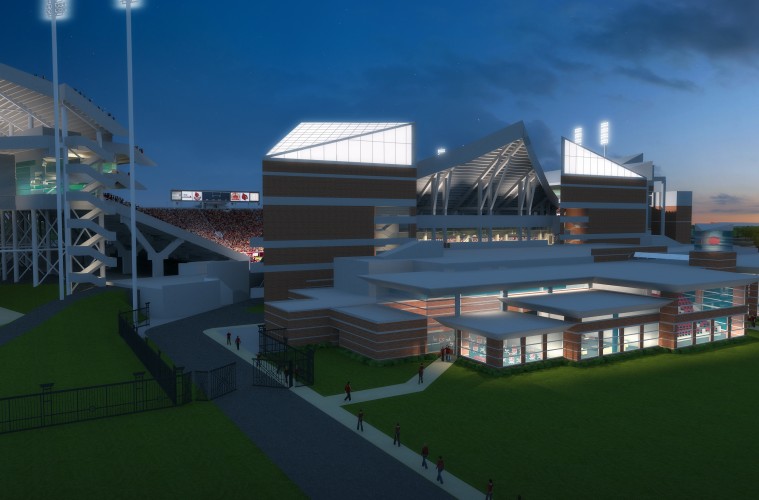 Once an area that seemed to be merely pillars of concrete and steel beams, the University of Louisville football program’s new-look home is quickly taking shape.

The finishing touches are being put on a $63-million expansion of Papa John’s Cardinal Stadium and the Howard Schnellenberger Football Complex, which began following the final home game of the 2016 season.

Enthusiasm continues to grow, as Louisville football returns in five months and welcomes an exciting seven-game schedule in its fully enclosed home venue. The Cardinals take on Western Kentucky, Florida State, Georgia Tech, NC State and Kentucky in what will be one of the finest facilities in the country.

The first phase of the project was an addition to the north end zone of the stadium. The expansion calls for two new levels of luxury seating above the upper deck, which adds approximately an additional 6,000 seats. The expansion includes 1,000 modern club seats, 65 new premium loge level boxes and 10 exclusive field level suites, while adding 25,000-square feet of distinct space.

Fans in the club seats will have access to a premier gathering area that will provide viewing access to the field. The middle of the field level will feature a special entrance for the team surrounded by supporters. The design provides a connection between the east and west sides of the stadium. Stadium seating will continue to feature all chairbacks fans, providing the only university-owned and operated stadium in the nation with that element.

The football complex, which currently sits in the north end zone, will undergo a major expansion and facelift. The team’s weight room and conditioning center will double in size, creating a total of 20,000 square feet of work space for training, conditioning and therapeutic support. A spacious player’s lounge, improvements for coaches’ offices and the team locker room, and expansive theatre-style meeting areas will also be among the enhancements for student-athlete development.