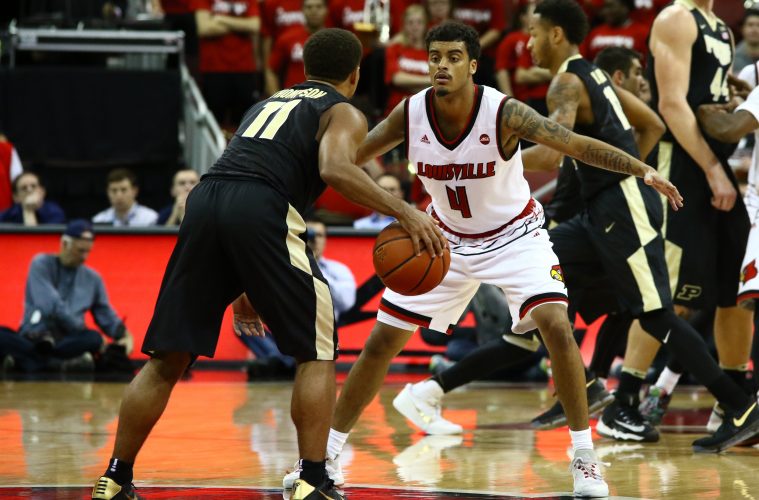 Louisville Will Travel To Purdue in ACC/Big 10 Challenge

The University of Louisville men’s basketball team will face Purdue for the second straight year in the 2017 Big Ten/ACC Challenge at Mackey Arena in West Lafayette, Ind.  Dates, times and television will be announced later.

The teams met in last year’s ACC/Big Ten Challenge when Louisville prevailed over then No. 15 Purdue 71-64 in the KFC Yum Center (12–30-16) as Ray Spalding (11 points, nine rebounds) and Mangok Mathiang (11 points, eight rebounds) led a balanced UofL effort.  Louisville has won two of its three previous challenge events since joining the ACC.  The Cardinals fell 71-67 at No. 3 Michigan State in 2014 and beat No. 14 Ohio State 64-55 in Louisville in 2015.

Purdue has an 11-6 all-time series advantage over Louisville, winning three of the last four matchups. The Cardinals last visited West Lafayette in 1987, falling 88-73 to the Boilermakers (1-18-87).

Louisville has received attention among many early top 25 rankings for next season.  Last season, the Cardinals posted a 25-9 record, tied for second in the ACC and earned a No. 10 ranking in the final Associated Press poll.  UofL is one of just four teams that have won 20 or more games in each of the last 15 seasons.  The Cardinals have received an Academic Performance Rate Public Recognition Award each of the last five years, including posting a perfect score the last four years.

The matchups for the 19th annual Big Ten/ACC Challenge, to be played in late November, the reigning NCAA national champions, is among the participants in this year’s event. The Challenge matches all 14 Big Ten teams against all but one ACC member. Dates, network assignments and tip times will be announced at a later date.  ESPN, ESPN2 and ESPNU will combine to televise all 14 games of the event, with all games also available to stream via the ESPN app.