As you might imagine there is going to be PLENTY of interest in this game.  It’s win or go home.  Bragging rights.  Revenge for Louisville from the 2012 Final Four. Further validation for Kentucky.

Both UK & UofL are the most recent National Champions, and the two schools are arch-rivals. Earlier in the season Kentucky beat the Cards at Rupp Arena 73-66.  UK held UofL to 39.7% shooting and out-rebounded the Cards 44-36.

Kentucky Head Coach John Calipari executed an excellent game-plan defensively against Louisville with Willie Cauley-Stein playing out front and causing major disruption to Louisville’s ball movement.  Louisville’s guards did not take advantage of their speed against this plan against the 7’1″ Cauley-Stein, and Louisville’s offense stalled for long periods of the game.

Kentucky’s Julius Randle was dominant in the 1st half before suffering cramps and missed most of the 2nd half against the Cards.  Russ Smith finished with 19 points on 7-20 shooting, just 5-10 from the FT line.  The UK game was also Louisville Forward Chane Behanan’s last in the Cardinal uniform before being dismissed and later transferring to Colorado State.

Stay Tuned to TheCrunchZone.com for coverage throughout the week for this much anticipated match-up between Louisville & Kentucky and all of the activities at the Midwest Regional. 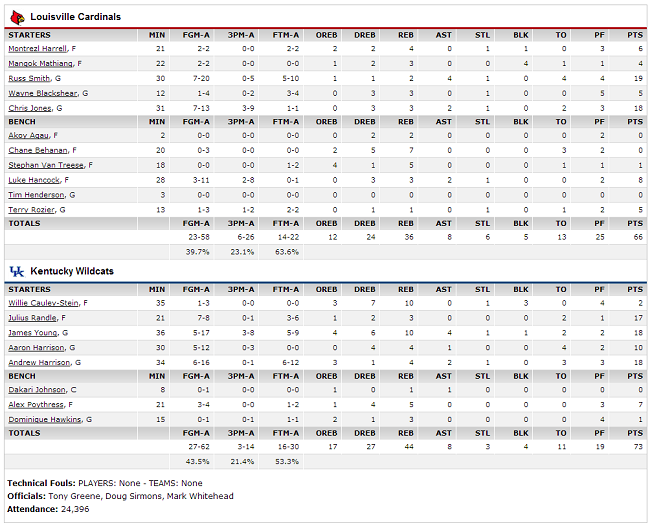